What is ‘gapping’, and why is it costing you shots on the course? 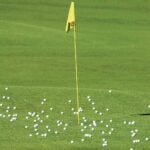 Good gapping can help you be more consistent from tee to green.

You may have heard the phrase before: Gapping. What is it, and more crucially, why should you care?

Gapping, in a nutshell, is the distance between each of your clubs. Let’s say a golfer hits their 7-iron 150 yards, for instance, their 8-iron 140 yards, and their 6-iron 160 yards. That golfer’s gapping is about 10 yards, meaning there’s a 10-yard gap in between each of their clubs.

Whether you’re a Tour player or a higher-handicapper, everybody has their own unique gapping, though 10 yards is pretty much standard. It helps you progressively get longer through the bag, without having to work too hard to plug the gaps.

But as GOLFTEC’s Brad Skupaka, explains, there are two instances when poor gapping can begin hurting your game:

The easiest (and best) fix for this is to book a clubfitting, which will solve the issue in no time. In the meantime, Skupaka recommends a three ball test that you can use between your irons and fairway woods — the most common place where bad or big gapping becomes an issue.

Find a GOLFTEC near you!