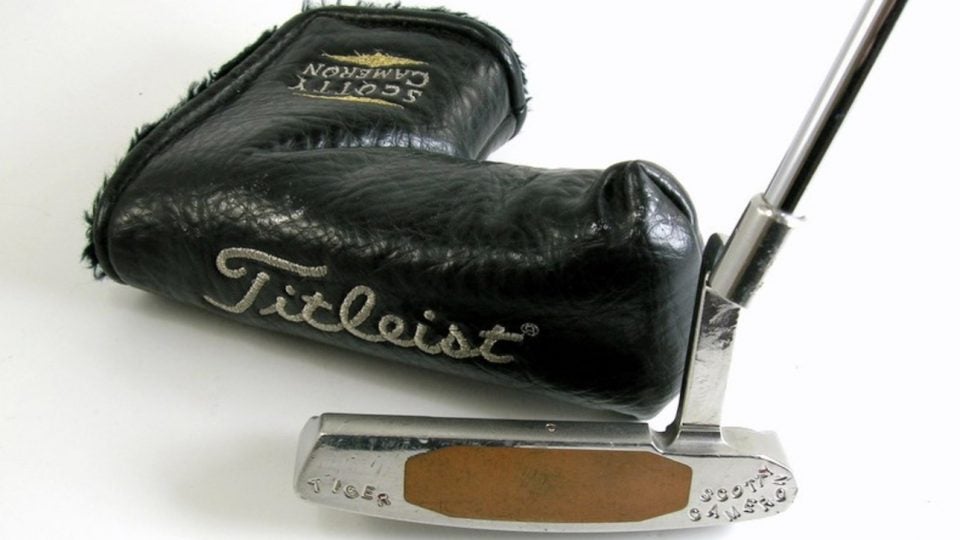 Tiger Woods personally used this Scotty Cameron putter prior to the 1997 season. It recently sold at auction for almost $23,000.
Green Jacket Auctions

Tiger Woods once told his son, Charlie, there were two putters in his putting studio that were off-limits: “There’s the black one I won with the Teryllium insert. I won the Masters in ’97 with it and [the Scotty Cameron Newport 2 GSS]. They sit next to each other. Touch any other putter, do anything you want with any other putter. But these putters are off limits.”

If you were to rank the most iconic putters in the history of professional golf, there’s a good chance Woods’ two prized putters would be right at the top of the list. Arguably the most important putter in the history of the sport, the Scotty Cameron Newport 2 GSS played a role in 13 of his 14 major championship victories. You could create a highlight reel of momentum-changing putts Woods made over the course of his career with the Anser-style blade.

The Scotty Cameron Newport Teryllium TeI3, on the other hand, doesn’t receive near as much fanfare as the Newport 2 GSS, but that doesn’t diminish the role it played in Woods’ career. During the 1997 Masters, Woods torched Augusta National, setting numerous records along the way en route to one of the most impactful victories in the history of sports. Backup versions of Woods’ putters have been sold before, but it’s been next to impossible to find a personally used version on the open market — unless your name is Tony Romo.

That’s partly why Tiger’s 1996 Scotty Cameron Newport Xperimental TeI3 prototype that recently sold at auction is so significant. Not only was the putter used by Woods, according to Green Jacket Auctions’ description, but it was also the prototype version that preceded the Newport TeI3 from the historic 1997 Masters win.

In other words, this is about as close as you’ll get to owning a used version of one of the two putters Woods covets in his small putter collection. And one of those putters (Newport 2) is still seeing action on the course. The most astonishing part is that the putter went for what could be considered a bargain at auction. Plunking down $22,784.40 for a putter isn’t exactly small potatoes, but consider this: Two of Woods’ Newport 2 GSS backups — putters he never used in competition — sold for $60,000 and $44,000 in the last three years.

This particular putter saw action in Woods’ hands as he began the process of getting acclimated to the Terrlyium insert, which featured 32 vibration-dampening dots that helped soften feel and mitigate the five screws that were used in the back cavity during the milling process.

The backstory on the 34.5-inch Xperimental TeI3 prototype is fairly interesting, assuming you’re a gearhead. The putter previously belonged to Randy Peterson, Callaway’s director of fitting and instruction, who frequently played golf with Woods and was gifted the putter prior to the 1997 season. “This putter was simply a prototype,” the description states. “Tiger got a new putter from Scotty Cameron that he would famously use to win the 1997 Masters Tournament by 12 strokes.” Another amusing feature? The last five digits of the Certificate of Authenticity from Cameron (84437) spells out “Tiger” on the phone keypad.

When it comes to putters with history and character, this one has it all.