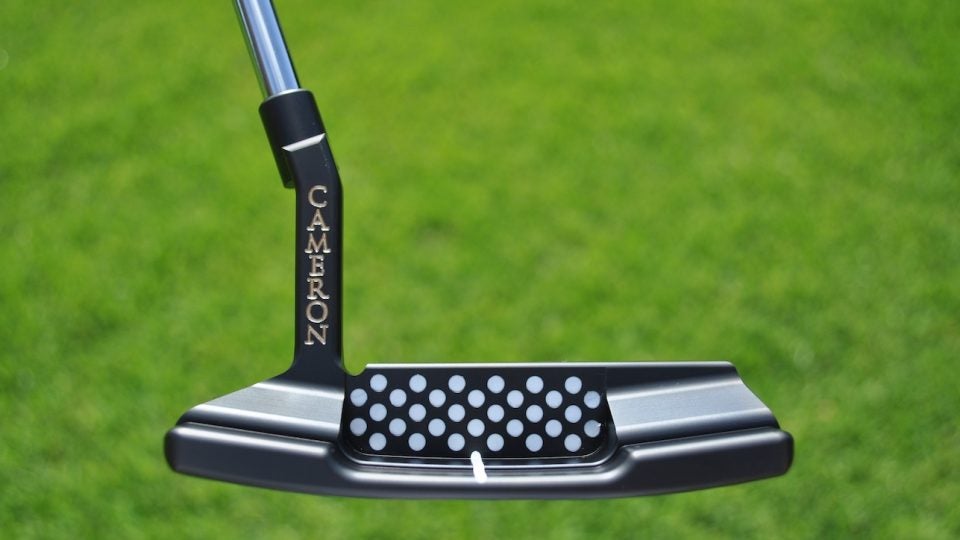 The 32 silicone dots represent Scotty Cameron's age when he came up with the design for the original Newport TeI3 putter.
Jonathan Wall

With the recent unveiling of Scotty Cameron’s T22 putter line, it’s worth revisiting how one of the putter designer’s most iconic creations came to be. Next to the Circle T logo and red “cherry bomb,” the domino pattern found in the back cavity of the Teryllium putter is without question one of Cameron’s most recognizable creations.

Aside from giving the putter an eye-catching look, the silicone dots serve a technical purpose as well, reducing unwanted vibrations and improving overall feel at impact. The design sounds like something concocted out of an R&D lab — only that isn’t how Cameron typically operates.

Cameron is used to finding inspiration in the darndest of places, well outside the walls of his headquarters in San Marcos, California. The silicone dots are no different.

As the story goes, Cameron happened upon the design almost by mistake while trying to rectify a busted muffler on his car. With the muffler dragging on the ground, Cameron got underneath the car and noticed a rubber strut was holding the other muffler place.

“I remember thinking that was going to eventually break,” Cameron told GOLF.com. “I figured, why don’t I just mill a bracket to the broken muffler and make it to where it would never come undone again, never break.”

An avid car enthusiast, Cameron is used to doing many of his own repairs. In this particular case, he raised the car up, milled the bracket out of steel and reattached the muffler himself. Mission accomplished. At least that was the assumption until he turned the car on.

“The vibration of the solid mount versus the rubber mount on the other side was incredible,” Cameron said. “The rubber mount made a world of difference with vibration and sound. That was kind of the ‘aha’ moment.”

At the same time Cameron was dealing with a busted muffler, he was going through an equally perplexing issue with the Newport TeI3. The Teryllium copper insert was fastened to the cavity using five screws during the milling process — one in each corner of the back cavity and one in the center — but the center screw was causing the putter to elicit a harsh feel at impact.

“As I’m sitting there noticing how harsh the vibrations are from the muffler I just attached with a steel bracket, I started thinking, what if I could get some rubber behind the insert of the putter — or a soft material that would help just like a rubber bracket?”

Cameron worked with a few different chemical companies to create a rubberized glue that could dampen vibration and sound, but none of them seemed to do the trick.

“I wanted a rubberized glue you could poke and feel, which wasn’t easy to find,” he said. “I still remember, I was watching golf on a Sunday — my daughter, I believe, is four years old — and I suddenly remember seeing a silicone at Target. The silicone that’s actually an adhesive, so it could hold in the insert, but also stay rubberized because it had a silicone compound to it.” 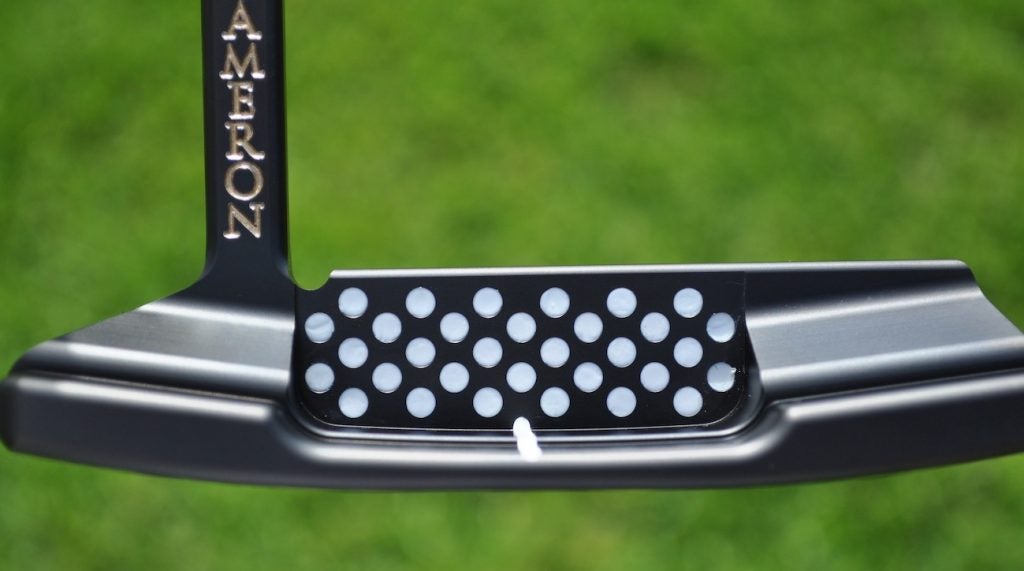 Cameron packed his daughter in the car and immediately headed for Target, where he found nine different types of silicone to test. To figure out which version worked best, he nailed nine holes in a piece of steel and labeled each tube and hole to keep each silicone straight. From there, he applied the silicone to each hole and waited 24 hours for the result.

In the end, a tube of GE Tub and Tile Silicone caulk proved to be the clear winner.

“The goal was to be able to poke it like a sales rep could come and say to the buyer, ‘Hey, feel the rubber. It’s not a white paint,'” Cameron said. “I wanted the rubber to stand out.”

Cameron was 32 years old at the time Newport Teryllium was created, so he added 32 white holes to the cavity, just for kicks.

With Tiger Woods wielding the putter at the 1997 Masters, Teryllium became one of the hottest putters in the industry, blending new-age technology with one of the most popular head shapes (Anser-style) in the history of the sport. To this day, it remains one of Cameron’s most coveted putters.

“And to think the original putter came together in the end simply from an idea working on a car,” Cameron said. “That’s pretty cool.”