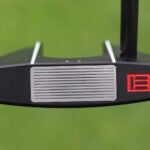 We’ve all looked at a new golf club at some point and said to ourselves, “Hey, that looks exactly like (insert previous club design here)! What gives?”

Surely you have a few golf clubs in mind that you consider “knockoffs” of other clubs. Of course, there are designs that legitimately violate patents, and those cases are handled by the court system. The court of public opinion, however, handles other cases of lookalikes, where no true patent violations exist.

From my standpoint, companies “borrowing” ideas from other companies always seemed to be generally accepted among golf club companies, at least when there isn’t a patent involved. It is what it is, type of situation. If you’re like me, though, you also wonder what the original designers themselves think about the practice of borrowing ideas. Finally, we got our answer.

Longtime putter inventor and EvnRoll CEO/designer Guerin Rife, who invented the cavity back mallet putter and was the first to put grooves on a putter face, recently joined our Fully Equipped podcast. During the episode, I asked Rife about his feelings on companies borrowing some of his own designs throughout the years.

Rife knows a bit about companies running with his original designs. If you look around at the current golf club marketplace, now that his patents have expired, there are countless versions of cavity back mallets and putters with grooves on their faces.

“I think they say imitation is the highest form of flattery,” Rife told Fully Equipped. “I mean, it can be painful, too, if it’s something you’re banking on and somebody just takes it and does it better.”

Rife himself says he’s no stranger to borrowing non-patented concepts from other companies, though.

“Good ideas are going to be copied,” Rife said. “For one, I’ll give you an example right now. I’m doing my version of the [TaylorMade] Spider, of what the Spider is all about. Odyssey has done [its version]. Everybody is chasing the leader.”

So, with Rife experiencing both sides of the coin, how does he feel about the practice of borrowing as part of the bigger picture? First off, he rightfully refers to the practice not as borrowing, but as “benchmarking.” By definition, a benchmark is something that serves as a standard by which other may be measured or judged. In the golf club industry, that would mean to compare one’s own product designs versus another company that has successful designs.

It’s this benchmarking process that Rife says helps elevate the industry as a whole.

“[As a putter designer], you say, ‘Well, how do I do that my way?’ And, ‘How do I take my technology and add to it and improve it and take it up a notch.’” Rife says. “Because that’s what makes our sport progress. … That’s how we get better as an industry.”

As Rife admits, though, some designs cross the line of benchmarking and stealing. But, if there’s no legal issue, it’s all part of the process and it’s to be taken as a compliment.

“Look, unless it’s a blatant knockoff where it’s like, ‘Have you no self respect? Why would you do something like that?’ There’s certain people who do stuff like that. … It’s embarrassing,” Rife says. “You see, people have taken my grooves and done their version of it. That’s OK. The patent is no longer enforced — go for it. I got my piece of that. But I’m not going to say don’t do it — it’s in public domain now; you can do that. And actually, it’s a compliment to the person that broke the ground that got the initial [design] started. I don’t have a problem when people put grooves on (putters), because … that’s validation. It’s something I did years ago.”

In conclusion: Don’t steal designs, but benchmark and advance. That’s how we as a golf industry have achieved such great technological advances thus far, and how we’ll continue to in the future. Also, if you have an original game-changing design, don’t forget to patent it!

For more golf equipment insights from putter inventor Guerin Rife, make sure to listen to Part 2 of our Fully Equipped interview in the Spotify embed below. And if you’re looking to find the right putter for your game, make sure to check out GOLF.com’s sister company True Spec Golf for a personalized fitting.