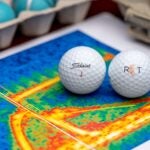 For the last few years, TrackMan Golf — one of the leading launch monitors in the industry — attempted to solve an issue that was more annoying than troubling. Its doppler-based launch monitor was initially created as an outdoor product that could track a golf ball downrange and deliver near-instantaneous results, but as golfers continued to take their fittings indoors, the developer started to notice a problem.

“We could measure spin all the way outdoors, but indoors it would only measure spin for the first 1 second of ball flight unless you marked the golf ball,” said Matt Frelich, TrackMan’s vice president of sales and business development. “The idea of measuring all of the parameters in an indoor bay was a key because that’s where a lot of fittings are done these days.”

Aluminum foil disks were initially affixed to the ball to estimate spin, but the disks had some downsides. They weren’t durable enough to handle more than a few shots, and they had to be oriented a certain way on every shot so the doppler unit could pick up the ball. Fitters found them cumbersome, and as TrackMan units started to find their way into homes of recreational golfers, the disks wound up being affixed improperly, resulting in inaccurate indoor numbers.

“Spin is important for predicting how far a ball will go in the air,” Frelich said. “We can measure the launch speed, launch angle, launch direction, but without spin, the accuracy of downrange prediction is not so great. The role of the fitter having to orient the ball so the sticker can spin around the spin axis — that’s the only way we can measure it in an indoor setting. If the spin axis is tilted, that sticker goes to the ear of the ball and they can no longer see it. Sometimes the sticker falls off. How do we make this easier for fitters, but also all of the consumers at home?”

In other words, TrackMan needed a solution. So they reached out to someone who could help: Titleist.

“TrackMan came to us several years ago and said, we have the sticker on the golf ball — a reflective dot — to capture data, but we’d like to research if there’s a way to make the indoor fitting experience more efficient and effective,” said Titleist golf ball product manager Michael Fish. “From our side, we were interested. We started working on a weekly or bi-weekly basis to create this new technology that would allow for indoor spin capture, as opposed to estimated spin capture if you didn’t put a dot on the ball or having to orient the dot each time you hit a ball downrange.”

The end result from the two-plus-year collaborative process is a golf ball that solves the indoor spin issues and eliminates the pesky adhesive disks altogether. Titleist’s new Pro V1 and Pro V1x Radar Capture Technology (RCT) golf balls look and perform like your standard Tour-quality pellet — with a new wrinkle that can only be seen when the cover has been removed.

“The first prototype marker we made lasted for one shot and then it was gone,” said Titleist’s Matt Hogge. “That’s when we knew we had our work cut out for us. The good thing is, our experience in printing golf balls and the team that we have here, with the coatings and chemistry mindset, we began to rapidly create prototypes, screening chemistries that would give us this radar reflective mark.”

Titleist initially seeded the product last year with 20 accounts to get an idea of how it would perform in an indoor environment. More than 50,000 shots were recorded with the balls from late November until February to see how they held up in a “live” situation.

“When we looked at the numbers, we noticed there was an 85 percent signal capture,” Hogge said. “We said, great, but it’s not good enough. We were really looking for upwards of 95 percent.”

After making some modifications to the reflective marker, Titleist achieved an indoor spin capture to within 15 RPMs of TrackMan’s outdoor numbers. In terms of percentages, the Pro V1 and Pro V1x RCT balls are 99 percent accurate in measuring spin decay in an indoor setting. Not only is the ball accurate, but the reflective design also allows it to be non-oriented, meaning golfers “can rake one ball over and hit a shot.”

“We wanted the ball to have the same feel as if you’re testing on an outdoor range,” Hogge said. “Golfers get into a routine and just start raking the ball over and hitting. There’s a rhythm to the process, and we didn’t want to mess with that rhythm.”

While golfers should expect the same performance and feel from each Pro V1 and Pro V1x RCT ball, Titleist confirmed the indoor-specific balls won’t be found in large quantities on retail shelves.

“We’re not going to have these products stocked in golf shops,” Fish said. “But it’ll be available on Titleist.com and to some of our partners in bulk skews so they can get it in their bays in larger quantities. There’s not going to be a huge display of it at your local golf store, but it will be available for golfers to purchase.”