Callaway’s brainy supercomputer has been hard at work creating the new 2020 Mavrik metalwoods line. Unleashing machine learning on the face of last year’s Epic Flash driver led Dr. Alan Hocknell, Callaway’s senior vice president of research and development, and his team to wonder what the numerical optimization could look like if they invested in an even more powerful supercomputer capable of answering increasingly difficult, sophisticated questions.

So Callaway hired experts from outside the industry and doubled the size of its supercomputing capabilities, making it more of a design tool than one for research.

Callaway’s previous supercomputer was able to spit out 15,000 design iterations in six weeks. But with an upgraded setup, Callaway was able to knock out 15,000 in one weekend. With more information and knowledge than ever before, it allowed the supercomputer to go beyond the original Flash Face and its different iterations, and create a specific face architecture for all three heads in the lineup — Mavrik, Mavrik Max and Mavrik Sub Zero.

The end result is Callaway’s new Flash Face SS20 design, a thinner, more robust face structure that not only maximizes peak ball speed out of the center but minimizes the variation of ball speed around the face as well, something the average mid- to high-handicapper will appreciate. The FS2S titanium used to create the face is forged into a specific thickness pattern — depending on head shape and use for each model — and then heat-treated to a higher strength level after the forging process to ensure it withstands tour player speeds. 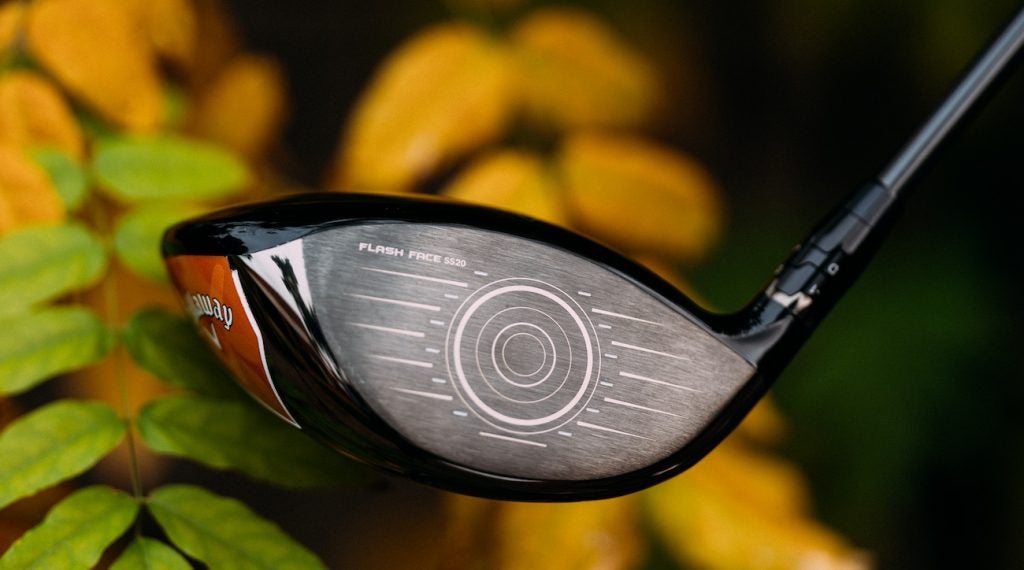 The lighter, stronger face design also allowed Callaway to set a higher CT target and not worry about the number creeping into the non-conforming range through continual use. With CT testing becoming a hot-button issue on the PGA Tour, Callaway is finding ways to ensure their drivers remain well within the approved range.

From a numbers standpoint, the Flash Face SS20 design is 13 percent more consistent downrange than Flash Face and comes in a smaller, aerodynamic package. With a supercomputer running the show, Callaway found it no longer needed a more rearward center of gravity location to pump up MOI.

The new-look Cyclone Aero head design is highlighted by a raised crown, shorter body and lifted sole that eliminates unwanted drag by 61 percent when compared to Epic Flash. The number equates to an additional 1 mph ball speed versus its predecessor.

Special attention was paid to the acoustics as well, with internal AI-designed titanium ribs mitigating the more pronounced sound at impact that some found with Epic Flash. The sound off the face is now shorter in duration with a more powerful, pleasing sound signature at impact.

Callaway’s Jailbreak technology and T2C triaxial carbon crown return to further push the limits of speed and sound. The titanium bars connect the sole and crown to make the entire structure more efficient during impact, while the lightweight crown redistributes weight to enhance forgiveness.

The standard 460cc Mavrik head (9, 10.5 and 12 degrees) is built around an AI-optimized Flash Face SS20 design for the golfer who prefers a mid spin rate with moderate draw bias. The head shape is shallower front to back, with a flatter crown and sole design shifting noticeably upward in the rear, making it the most prominent Cyclone design in the lineup. A fixed 5-gram weight located in the back-center of the sole delivers the mid-level launch and spin characteristics.

At 450cc, Mavrik Sub Zero (9 and 10.5 degrees) is the smallest head in the lineup with a shape more closely resembling Epic Flash Sub Zero Triple Diamond. Designed for low spin, the driver doesn’t skimp on forgiveness due to two interchangeable screws in the front and back (2 and 14 grams) that can be positioned to alter launch angle and spin rate. It also features a flatter lie angle and more neutral bias compared to Mavrik and Mavrik Max.

With a footprint similar to Callaway Rogue, the Mavrik Max (9, 10.5 and 12 degrees) is a new addition for 2020. The most forgiving face in the line incorporates two interchangeable weights (2 and 14 grams) to change launch and spin, along with a prominent draw-bias weighting to reduce the effects of a slice. With a generous face design, it’s possible to miss out on the heel or toe and still achieve playable distance with a relatively tight dispersion.

Callaway’s Mavrik drivers retail for $449 and will be available Jan. 23.

Not a cut and paste solution

Translating Callaway’s Flash Face SS20 design from a driver into a fairway wood is no small task — even when you have a supercomputer on the team.

“It wasn’t just a cut and paste solution from the driver to the fairway,” Hocknell said. “We had to learn how to optimize a driver face design using our AI machine learning tools.” 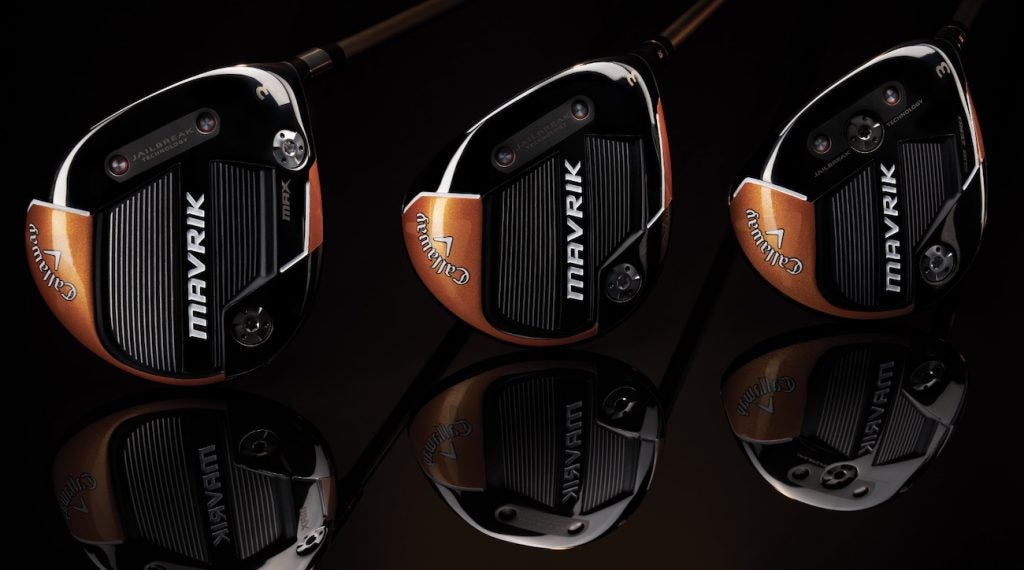 There are plenty of options to choose from when it comes to Callaway's Mavrik fairway woods.
Callaway

One of the things Hocknell and his team learned is that it’s possible to generate driver-like ball speeds by pairing a springy C300 maraging steel with a robust face cup. Employing Artificial Intelligence with machine learning to ramp up the distance, along with a unique face architecture that plays to the strengths of each model in the lineup, also doesn’t hurt. Not only does each model have its own face thickness pattern, but each loft available within the specific model.

That essentially means every Mavrik fairway wood has its own unique fingerprint, with a face built around specific use cases.

Extensive testing led to the development of progressive leading-edge geometry for each face as well. The standard 174cc Mavrik (13.5, 15, 16.5, 18 and 21 degrees) features a leading-edge radius that’s less tight near the face to promote more ball speed, while the draw-bias, 200cc Mavrik Max (13.5, 15, 18, 20, 21, 23 and 25 degrees) incorporates a leading edge that’s closer to the ground to help with contract, particularly for golfers who sweep the club into the ball. The 169cc Mavrik Sub Zero (13.5, 15, 16.5 and 18 degrees) is the most compact shape with a tighter leading-edge radius and interchangeable weights closer to the face and center-back to regulate launch and spin.

Callaway’s Mavrik fairway woods retail for $299 and will be available Jan. 23.

Callaway’s Flash Face SS20 design continues through the hybrids with three different head shapes in the category. It’s a situation where every golfer should be able to find something that fits their strengths.

Taking a page from the Mavrik fairway woods, each fully optimized AI face design is developed for a specific loft to promote an optimal combination of speed, launch and spin. Callaway’s Jailbreak technology brings the entire head together, connecting the crown and sole for streamlined distance. 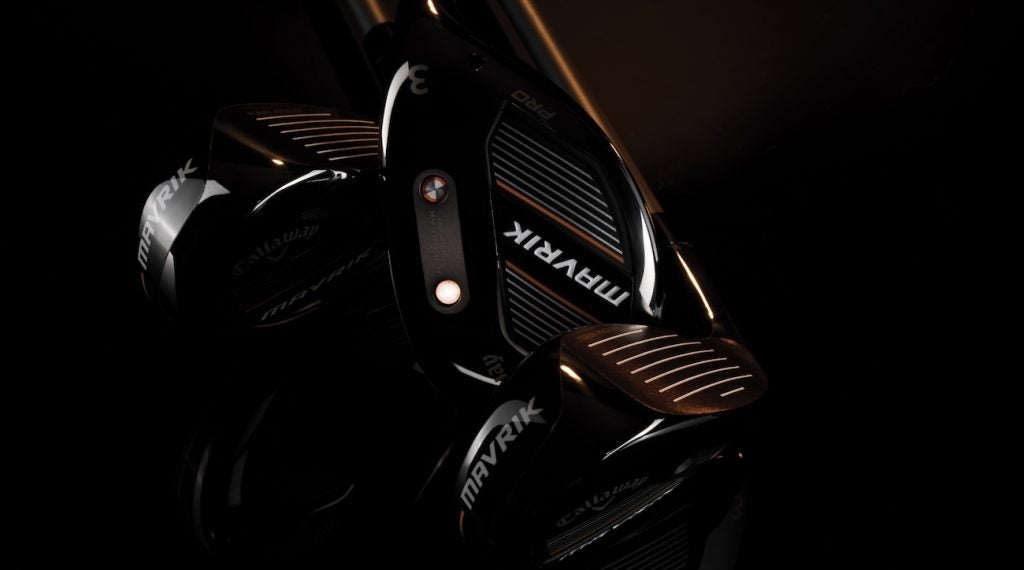 The mid-sized Mavrik (18, 20, 23 and 26 degrees) has an iron-like profile with a square toe and scoring lines that form a vertical line on the ends, giving it an iron look at address. The Mavrik Max (19, 21, 24, 27 and 30 degrees) offers a slightly larger head, with the same square toe, for the golfer who needs more forgiveness with a rearward center of gravity and relatively flat bottom.

Rounding out of the lineup is the new Mavrik Pro (18, 20, 23 and 26 degrees) with its fairway wood-esque shape that’ll appeal to the better player. So, too, should the flatter lie angle and smaller profile.