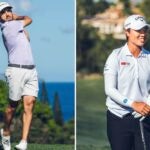 Callaway’s Tour stable will have a couple of new faces this year in the form of PGA Tour winner Abraham Ancer and 2021 U.S. Women’s Open champion Yuka Saso. Both players were officially announced as staffers on Tuesday and will sport Callaway equipment and headware as part of their multi-year agreements.

Ancer is the latest high-profile name to join a PGA Tour staff that already includes Phil Mickelson, Jon Rahm and Xander Schauffele. Financial terms were not disclosed, but it’s understood Ancer will use a Callaway driver and Odyssey putter as part of the — two pieces of gear he already had in the bag when he won the 2021 WGC-FedEx St. Jude Invitational.

“I’m excited to officially join Callaway, and after playing their equipment over the past several years, I feel really confident about making the switch,” Ancer said. “The performance from their drivers is always impressive, their putters are outstanding, and I’ve developed a strong relationship with their Tour Team. This is a great fit for me, and I can’t wait to get this new year started.”

Ancer is currently ranked 17th in the Official World Golf Ranking and plans to open this season this week in Maui at the Sentry Tournament of Champions.

Yuka Saso burst onto the scene last year with her victory at the U.S. Women’s Open, equaling Inbee Park as the youngest winner in the tournament’s history at 19. Ranked 8th in the Rolex Women’s World Golf Rankings, Saso is set to put in play Callaway woods, irons, wedge and an Odyssey putter when she returns to the course at the LPGA’s Hilton Grand Vacations Tournament of Champions.

“I’m so happy to join Callaway, and to work with their outstanding Tour team as I start the next phase of my career with their equipment,” Saso said. “From their drivers to their golf balls, the performance really stands out to me in testing and out on the course. I feel confident that this is the best setup for my game, and I’m looking forward to a great year.”