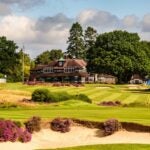 Golf in the United Kingdom originated along its coastline on linksland but as the sport became popular, people wanted courses nearer to where they lived. One of the earliest inland courses that established a new standard in design came here at Sunningdale just after the turn of the last century. When you layer on Harry Colt’s improvements (such as moving the 12th green high and to the left) to Willie Park Jr.’s original effort, you end up with one of the game’s most noble inland courses. (Photo: Kevin Diss)