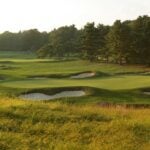 What makes Merion so distinctive is its remarkable variety. Some par-4s are short, others are monsters with the delta being as much as 200 yards. One par-3 is tiny, at 115 yards; the others measure 236, 246 and 256. The famous par-4 11th, where Bobby Jones clinched the 1930 Grand Slam, is slashed by a creek, while the par-4 16th demands a shot over an abandoned stone quarry. In short, Merion has everything, including sub-air and irrigation systems that lend more control over the firmness and speed of the playing surfaces. The recently expanded greens have created a plethora of new hole locations around the greens’ perimeters, and the player’s chess match with the clever design is more intense than ever. (Photo: David Cannon/Getty Images)