Connoisseurs of golf travel writing are well familiar with what could be called the “jam-o-graph.” It’s the passage, right after the long, florid description of each of the many high-end courses the writer heartily enjoyed, that’s crammed with the various other amenities on offer, the vast majority of which our hero didn’t have time for, owing to his onerous 36-holes-a-day regime. An adjective about the spa (“sumptuous”), a note about the dining (“locally sourced”), a number or two to indicate the breadth of offerings (“12 tennis courts,” “three swimming pools”), and then circle back around for the big, golf-centric finish.

This time let’s turn that formula on its head. Not because Northern Michigan’s Boyne Mountain and its nearby sister properties, Boyne Highlands and Bay Harbor, don’t offer terrific golf. They do, and plenty of it—10 varied courses, all within a half-hour drive. Given the endless summer days at the northwest end of the Eastern Time Zone, buddy trips allow for 54-hole-a-day golfapaloozas.

The Rothmans, however, came as a family—Dad, golf-crazed-but-still-9-year-old son Ike, and plays-a-little-mainly-not-to-become-a-golf-widower mom Lorraine. So, we chose a different tack: nine holes of golf daily, and the rest of the time jam-packed with the jam-o-graph stuff. In Boyne Mountain, we chose the right place.

This became apparent the evening of our arrival at its homey Mountain Grand Lodge, full of knotty pine and decorated with Saturday Evening Post ski-themed covers. The expansive lawn in the rear of the chalet-style hotel was full of games—and children and adults actually playing those games. Cornhole beanbags were a-flyin’, along with whoops of delight and cries of mock-agonized disappointment. Ladderball was also in full swing, in which you toss two balls attached to either end of a rope at a three-tiered hanger, trying to wrap the rope around it. The volleyball court featured more flip-flops and sandals than spikes, and more laughter, too, while a rollicking 15-a-side game of touch football pitted the members of a large extended family against one another.

Ike fearlessly wandered up to a couple of older boys kicking around a soccer ball. Uruguayans living for a year in Indiana while their father studied for his PhD., the teenagers taught my boy some Luis Suarez-worthy tricks. Better still, they became his pals for the week. “I’m going to meet my friends at the pool,” he announced the next day. If only all of us could forge such bonds so quickly.

Boyne’s golf provides its own thrills, which we’ll get to, but it has plenty of other means to get the blood pounding. Foremost among these might be its zip-line course, which one reaches via a scenic chairlift that also runs every evening simply for viewing pleasure. My golf game has always been grounded in fear—“Don’t hit it fat,” “Don’t hook it” (so of course my miss is generally a thin fade)—but I made a determined effort to at least try the tricks the millennial guides asked during the two-hour, 10-line course through the trees. None of my attempted flips or upside-down hangs came off, but it still felt bolder than going for a par 5 in two, even with all the mid-zip shrieking.

With a 100-pound minimum, Ike was DQ’d from the 90-minute Segway tour, taking Mom with him to a rendezvous with his buddies, so I was on my own there. If memory serves, Segways were going to revolutionize personal transportation; hype notwithstanding, they are still barrels of fun, at least once you stop mistakenly trying to lean forward to move forward and instead just push your weight onto your toes. The overall effect is like suddenly finding yourself a perfectly competent unicyclist, or so I imagine.

Short of a flop shot off a tight lie, few things normally hold as much dread for me as a water park, especially an indoor water park. Here again, the Mountain Grand Lodge disrupted my thinking. Its 88,000-square-foot wet wonderland, Avalanche Bay, proved the aquatic equivalent of a super-fun par-3 course. Even better, on a rainy midweek morning (the only break in the perfect, low 80s, no-humidity stretch), there were zero lines of note—even on perhaps its showcase ride, the bodysurfing Rip Zone Surf Simulator. Yes, I tried this, too, and to my surprise, so did Lorraine. We left with water up our noses, and elsewhere, but with newfound respect in Ike’s eyes. I figured we’d last 90 minutes at Avalanche Bay, max, but only after three hours of pulse-ratcheting slides and drops, with a little lazy-rivering thrown in, too, did we manage to tear ourselves away. Ike had a tennis lesson scheduled. 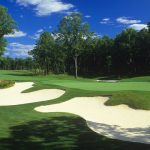 All this childlike play can lead only to one place: ice cream. As a lifelong Northeasterner, I had no familiarity with Kilwin’s, a local confectionary chain based out of nearby Petosky. If I did, I’d be two pants sizes larger. This area is the country’s cherry capital, so that flavor was duly sensational as Spieth’s short game, but you couldn’t go wrong with anything, and we tried just about everything.

Boyne Mountain’s food isn’t designed for the epicurean—the Vintage Chophouse at the posh Inn at Bay Harbor on the shores of Lake Michigan covers that angle—but its variety serves it well. There’s Chicago-style pizza at the Trophy Room. 40 Acres, so named for the original land resort founder Everett Kircher bought from a former state legislator for $1 back in 1947, has solid pub fare and some fine local microbrews, with the Horny Monk, a Belgian-style ale, a standout. Everett’s provides a thorough breakfast buffet to undergird all the day’s activities, and its outdoor deck is also a nice spot for dinner, adjacent to that great lawn abuzz with activity.

Okay, okay: The golf. It certainly merits more than a jam-o-graph, though its scope demands a 10,000-foot-view. For the status seekers and aesthetes, the Links nine at Bay Harbor Golf Club (which, along with the Inn at Bay Harbor, is a GOLF Magazine Gold Medal Resort) should be first on the checklist. The reason is simple: Its four gorgeous waterfront holes and their views of Lake Michigan. We played another Arthur Hills design nine during the week: the front side of his eponymous course at Boyne Highland. It starts a bit funky, with a 1980s vibe (though built in 2000) due to conspicuous containment mounding and extended waste areas. Then, like a good John Hughes film you haven’t watched in ages, it inexorably grows on you. The 5th hole, wholly surrounded by majestic pines—the effect is like playing in a forest-themed snow globe—is an eye-popper of an inland hole, a 456-yard distillation of the long-running “Pure Michigan” marketing slogan. (Likewise, the par-5 13th hole that descends 150 feet from tee to green, and which some locals say has the best inland view in all Northern Michigan.) Back at Boyne Mountain, the Alpine course, after a pair of dodgy opening holes (drop-shot dogleg par 4; awkward forced carry approach), blossoms into a lovely, classic parkland layout with expansive countryside views. Our chosen golf load didn’t allow us to tackle Boyne Highlands’ Heather, a classic 1966 Robert Trent Jones design that has hosted multiple state Amateur championships and also made GOLF’s Top 100 You Can Play list; its Donald Ross Memorial, a high-concept 18 that offers replica holes of some of the Scottish master’s finest designs, from Pinehurst to Seminole, Plainfield to Dornoch (likewise, Boyne Mountain’s Monument course pays homage to a slew of architects, including Mackenzie, Ross, RTJ and Dye, ending with, appropriately enough, an island-green par 3); and its bruising Moor layout, perhaps the area’s sternest test for its length and many doglegs. A quick cart tour, however, showed them all to be in sterling condition and, encouragingly for the game, being enjoyed by a wide variety of players.

Nor did we get to see Bay Harbor’s Quarry (with a trio of closing waterfront holes) or Preserve nines, but my memory from a long-ago visit has them aptly named and quite distinct, brawny and craggy on the one hand and lush on the other; it’s a tale of two nines no matter one’s given choice among the trio at Bay Harbor. Across the street from Bay Harbor visitors will find yet another offering, the recently renovated and popular Crooked Tree.

For once, a vacation essentially ended not with a holed putt but with oars in the water, as we spent our final afternoon propelling a kayak around Boyne Mountain’s serene Deer Lake, working up an appetite for a lovely dinner at its adjacent Beach House restaurant. We ate and watched the seagulls flit about the people knocking balls about on the lawn’s nine-hole putting course. It was tempting to get out there ourselves after dessert, but we were sated in all things and happy to return home still enthused by the idea of golf to come rather than bloated on it. 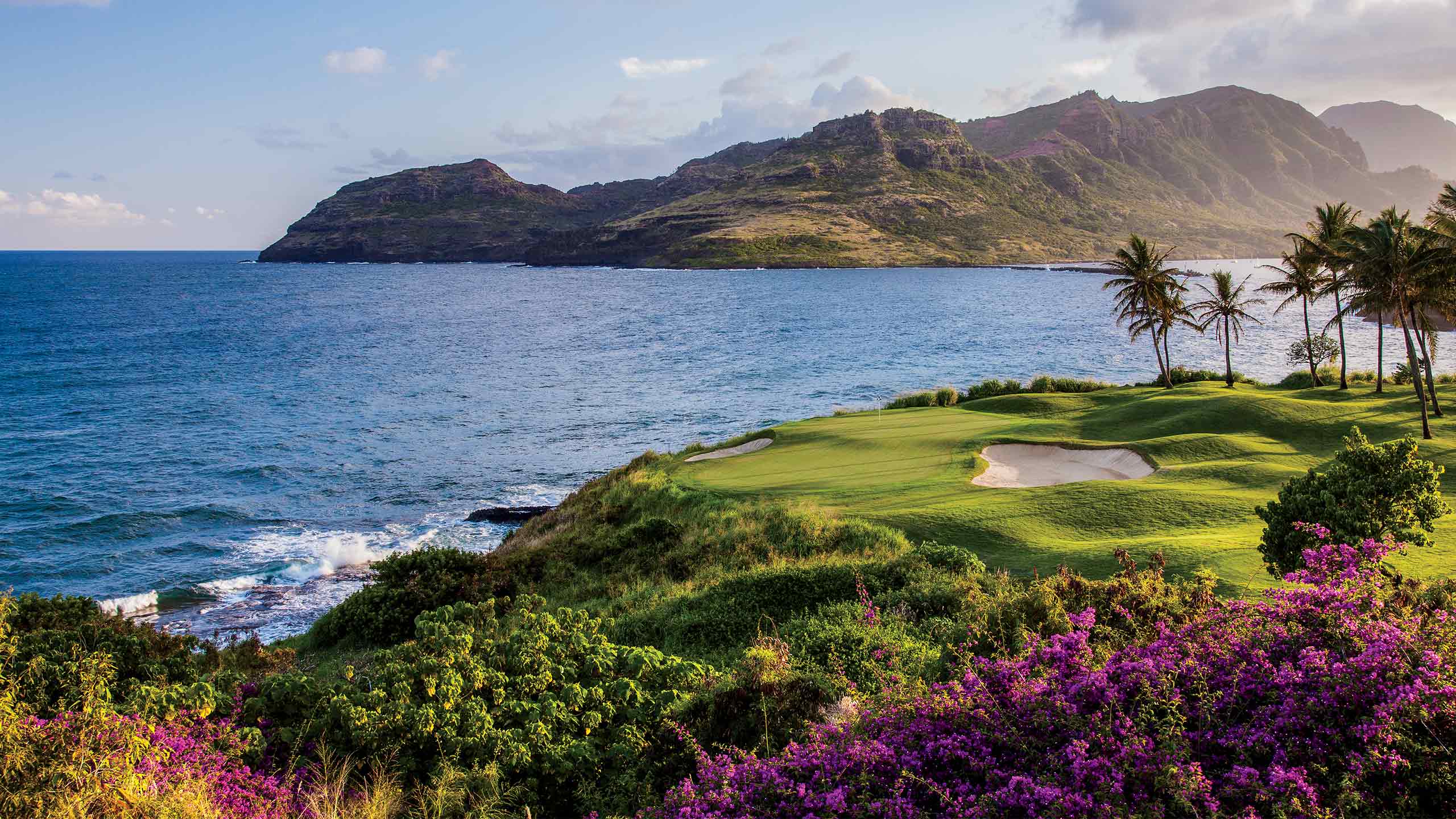 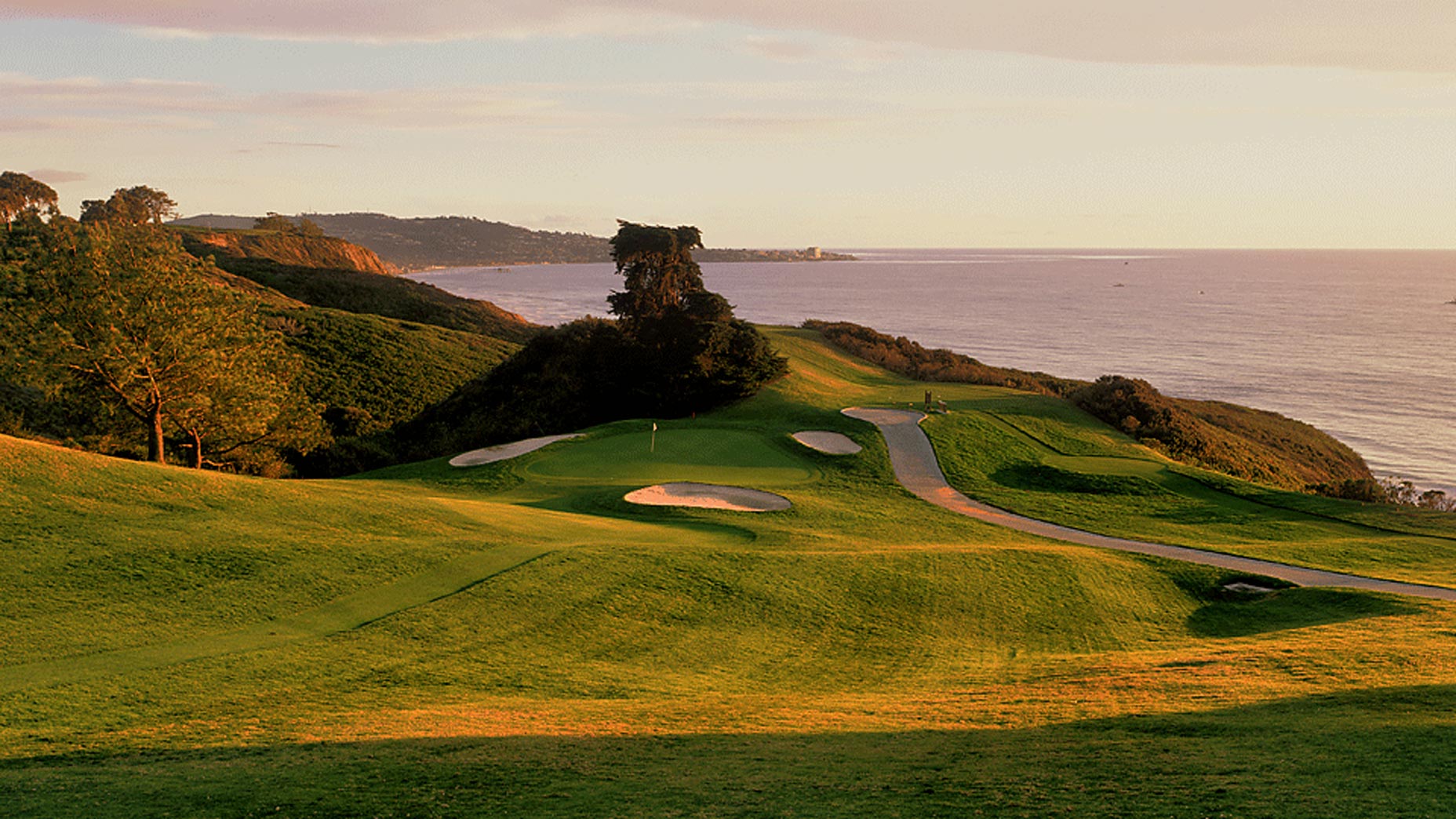