Why Scottsdale always shines as a golf destination 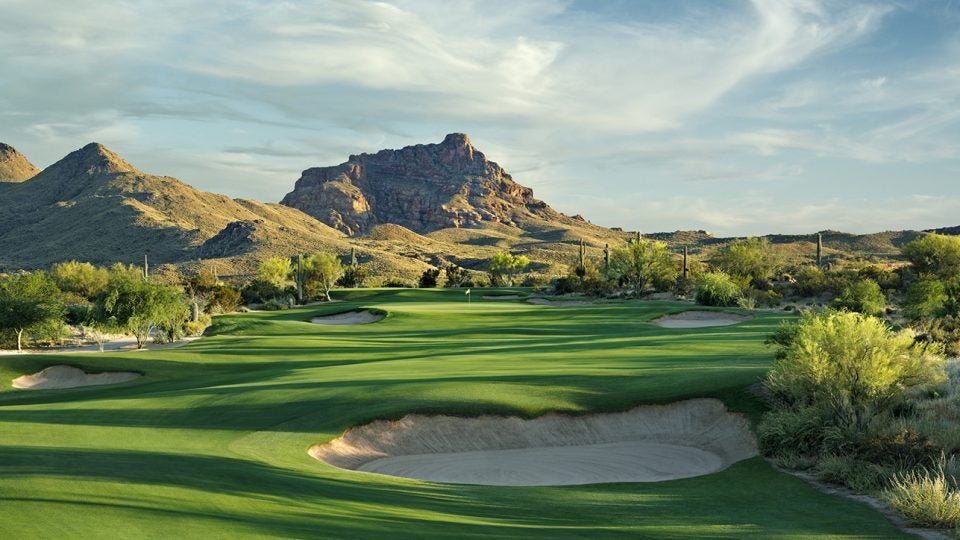 It just had to rain, didn’t it?

Scottsdale only receives about eight inches of rainfall a year, which is 80% less than the nationwide average. So of course it poured for three of the four days I was there in February.

Three pals and myself exchanged giddy texts for months leading up to our golf trip, but in the weeks prior the weather became a major topic. Surely it wouldn’t rain during the entire trip? Right, it didn’t. It only rained for 80% percent of it. And some of the time the wind was as wicked as a British Open. As for the temperature, it was on average about 20 degrees cooler than normal for that time of year. (You’ll be happy to know that everything was back to normal, 80 and sunny and gorgeous like always, the day after we left. Go figure.)

But despite our rain gear taking a beating, we accepted our bad luck and the golf destination that is Scottsdale still passed with flying colors. Where else can shoddy weather wreak havoc on a trip yet it still be so memorable because the golf is just that good? Here’s why our sunny-turned-dreary getaway to the canyons was still time well spent. (Hint: Great food, drink, golf and casinos make it easy.) 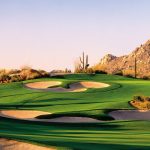 There’s nothing like touching down on a runway to begin a golf adventure. We arrived from different states at about 8:30 p.m. Thursday evening and made it to our Airbnb rental in Scottsdale shortly after. We decided to stay just a few minutes from downtown Scottsdale. It was perfect for us, as we were close to restaurants, nightlife (for at least one long evening of questions decisions) and our golf courses.

After drinks and pizza downtown — you can’t get too crazy on the first night, you know — it was time to rest up for Friday’s 36-hole jaunt.

At least we had Friday. It was the only day during the trip where the weather was superb, and we took advantage. We hopped on AZ-101 and headed north to Grayhawk for 36 holes, hitting the Gary Panks-designed Talon course first and the Tom Fazio-designed Raptor with a bite on the patio in between. The Talon ranks sixth and the Raptor 12th, respectively, on GOLF’s list of best courses you can play in Arizona.

The Talon was a great opening 18 to get ready for Phoenix golf. It had a little bit of everything and ended with the insanely fun island-green 17th (with the blooming flowers, it’s also your best photo op of the day). The Raptor and Talon are great because you aren’t playing the same course over again. They’re different and both offer their own kind of excitement and challenges. But one of the best parts about Grayhawk is its history. The Frys.com Open was played at the Raptor from 2007 to 2009, and who doesn’t enjoy playing a course that hosted the pros?

Besides the courses, the amenities at Grayhawk are top notch. There’s Phil’s Grill, which needs little introduction, as it bears the name of the five-time major champ. And there’s several quick-hitting options to get your food and go (not to mention one of the biggest beverage carts I have ever seen).

After 36 at Grayhawk, it was a quick stop for fast food — sometimes speed is better than quality — before regrouping at our rental. The night was just getting started, because of course we had to visit Topgolf.

None of us had ever been to a Topgolf before Saturday night, but we were all blown away. First off, go early, or you will wait. The Scottsdale Topgolf is one of the company’s busiest locations, with waits for a bay up to three hours on a weekend.

But I can see why it’s busy. It’s not just for golfers. Next to us were four dudes who would have had better luck making solid contact swinging a jump rope — but they didn’t care. They were having the most fun out of anyone. A larger party of men and women were on the other side of us, and only a few of them looked as if they had swung a club before. Yet they were there longer than us.

If you don’t land a bay, you can still hang out at one of the many bars, relax in the lounge, shoot pool or find countless other ways to keep busy. And when you get your bay, you are all set — servers will take your food and drink orders as you bash range balls playing one of the dozens of games they have to offer.

Even days after our trip, the chatter of our Topgolf experience outweighed any of the reminiscing we did about the other courses. That says a lot.

Of course, as is life, the worst weather day we had was when he had Troon North’s Pinnacle course lined up. GOLF ranks it as the top public course in the state (and 25th in the U.S.), and it was easy to see why. The Weiskopf/Jay Morrish design is carved through rock and slides along the canyons in such a beautiful way it’s almost impossible to describe. There’s risk-reward shots at every turn, and the elevation changes bring out a Phil Mickelson-like imagination in every golfer trying to conquer the course underneath the mountain peaks.

Although we played the entire round in 50-degree weather complemented by a downpour and blustering winds, it was still a treat. Our caddie deserved every penny of our tip that day.

Troon North’s Monument is no slouch either. We didn’t get a chance to play that one (18 holes in that weather is enough), but it’s on the to-do list. As it should be on yours.

Proof, for short, is at the Four Seasons Resort in Scottsdale, but you don’t have to stay at the hotel to land a table. That said, it would be wise to lock up a reservation. It has a style that’s trendy, unique and classic all at the same time, and its massive outdoor area boasts fantastic views, too (as long as your weather allows you to get outside; ours didn’t). And of course, any place that has a shuffleboard table is OK in my book.

Proof has thirst-quenching house-made cocktails and an enormous selection of beers on tap. As for the food, there wasn’t a complaint at our table. The pretzel knots we got to start had to be ordered a second time since we ate them so fast, and the entrees — the beer can chicken and Maine lobster roll were our picks — were finger-licking good.

But before you leave, you must grab a dessert. They are all created in house and worth every penny. Classy cocktails, amazing entrees and dessert heaven all wrapped into one.

Like the aforementioned stops, We-Ko-Pa boasts two dynamite tracks that make you yearning for more. The Saguaro and Cholla courses rank second and third, respectively, on GOLF’s list of best public courses in the state. We started with the Saguaro, a Bill Coore/Ben Crenshaw design that has wide fairways and a ton of undulation. The week was a mind-boggling trance of superb golf courses, yet this one stood out for me. Already a big fan of Coore/Crenshaw courses, this one met my appetite.

Spray your driver? No worries. You can do that a little bit here and still be in the ballgame. The course plays fast — even more so when it’s not wet like when we encountered it — and has a nice mix of holes and a great flow to the 18.

After loosening up on the Saguaro course, we finished our week with a quick two-person scramble on the Cholla. Our only regret is that we didn’t start a little sooner so we could have gotten the last hole in before complete darkness. The Scott Miller-designed Cholla provided a different view and challenge than the Saguaro, but it was equally as fun. A few of the best par 3s we played all week are on that 18.

And, a Cholla bonus that might slip your eye if you aren’t paying attention — there are no houses on the property. None! That doesn’t happen often these days. With We-Ko-Pa built on tribal land in Fort McDowell, it’s as secluded as you might be all week. A perfect time to enjoy the stellar golf. It’s such a shame that we had time to kill before our flights on Sunday evening. Although if we didn’t all come away with a few extra bucks in our pockets from the casino at Talking Stick, maybe I wouldn’t be singing the same tune.

Anyway, Talking Stick is located a few hundred yards from Topgolf and, from our brief experience, has a solid Mexican restaurant and a couple of lucky blackjack tables that we took advantage of.

Until next time, Scottsdale.