Where are GOLF’s Top 100 Courses in the World? Here’s a global breakdown

Now that you have seen the complete list of GOLF’s 18th biennial ranking of the Top 100 courses in the World, it’s time to dig a little deeper—partly for posterity but mostly so you can target which country or region you need to visit for your next bucket-list adventure. Look no further, here’s where you can find GOLF’s Top 100 Courses in the World. Pack your bags!

Seven of the top 10 courses in the world reside in the U.S., including the top two in Pine Valley (New Jersey) and Cypress Point (California). Augusta National ranks fifth on the world list and the U.S. courses rounding out the top 10 are Shinnecock Hills (6th), National Golf Links (7th), Oakmont (8th) and Pebble Beach (9th). All 44 of the U.S. courses on the world list also appeared in 2015’s ranking (and for most many before that). Inverness in Toledo, Ohio, is the lowest ranked U.S. course in the Top 100 of the world, sitting at 98th.

Surprise, surprise: The top-ranked course from Scotland is St. Andrews’ Old Course, which comes in at No. 3, trailing only Pine Valley and Cypress Point. Muirfield, at No. 10, is the other Scottish course in the top 10. While the U.S. has nine courses in the top 16, Scotland has a top-heavy list as well. Royal Dornoch’s Championship course is 15th, and Trump Turnberry’s Alisa is 16th. Carnoustie (28th), Trump International (46th), Royal Troon (47th) also cracked the top 50.

Sunningdale (Old) is the highest English course on the list, coming in at 31st and up four spots from the previous ranking. Two Open rota courses are the next-highest ranked for England: Royal Birkdale (34th) and Royal St. George’s (42nd).

Royal Melbourne (West) just missed out on the top 10, but it still moved up one spot from the previous ranking to come in at No. 11. Kingston Heath, also in Melbourne, jumped up eight spots to No. 20, and Barnbougle Dunes (38th) and New South Wales (43rd) also landed in the top half of the list.

Ballybunion (Old) didn’t move from its previous ranking (17th) and still leads the plentiful list of Irish honorees. Lahinch (Old) and Portmarnock (Old) were 35th and 49th, respectively, and Waterville (82nd) and the European Club (97th) also found spots on the list. Hirono in Kobe moved up two spots and ranks 40th, and Kawana (Fuji) and Tokyo registered at 68th and 99th, respectively.

Three Canadian courses made the ranking, highlighted by newcomer Cabot Cliffs (50th) in Nova Scotia, the Bill Coore/Ben Crenshaw design that is one of two courses at Cabot Links. Cabot Links, which opened before the Cliffs, is ranked 96th, two spots behind the other Canadian course on the list, St. George’s in Ontario (94th).

Newcomer Tara Iti in Te Arai debuts at No. 29, and it’s joined by Cape Kidnappers in Hawke’s Bay, which is 44th.

Only two courses from Northern Ireland are in the Top 100, but there’s no need to scroll down to find them. Royal County Down in Newcastle jumped up one spot and is now ranked fourth (swapping places with Augusta National). Royal Portrush (Dunluce) also made the list at No. 14. 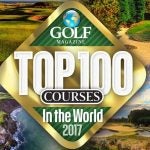