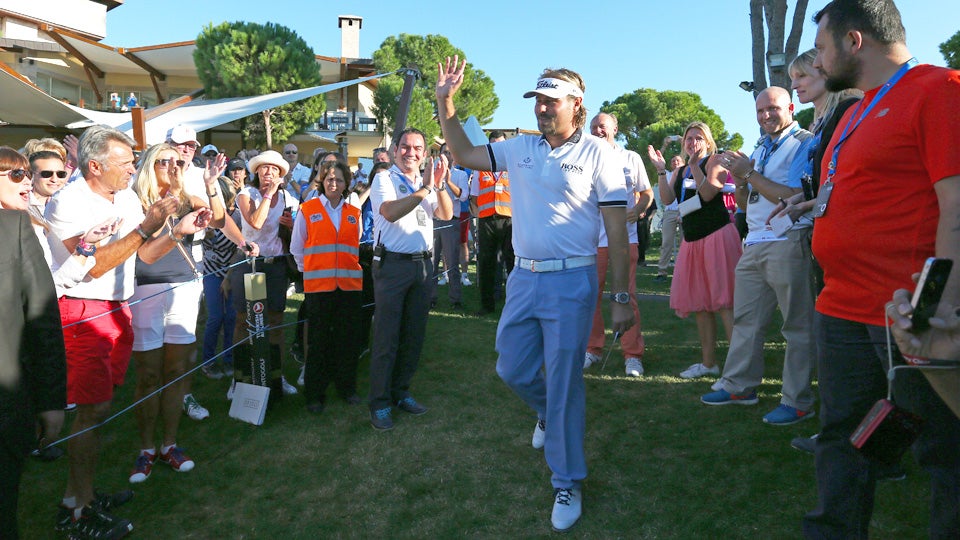 Van Zyl had led from the opening round and was two shots ahead of Dubuisson after birdies on the 13th and 14th. But the Frenchman responded with three birdies on the last four holes for a 6-under 66 while Van Zyl finished with four pars for a 67. That gave Dubuisson a one-shot victory with a 22-under 266 total and a second career European Tour title.

Rory McIlroy was a shot behind the joint overnight leaders going into the round but only managed a 71 to drop to a tie for sixth at the first of four Final Series tournaments that award increased points totals toward the Race to Dubai.

Dubuisson broke down in tears when his final birdie putt sank on the 18th, having managed just two top-10 finishes this year going into the tournament. But he clearly enjoys playing in Turkey, where he also won his first career title in 2013.

“Sometimes you feel like your game is never going to come back and this week I realized that my whole game was here,” the Frenchman said. “I was really counting on this Final Series to give me some confidence back because I completely lost it a few months ago. I was just missing everything.”

Kiradesh Aphibarnrat of Thailand finished third, another shot behind Van Zyl. Kiradesh almost chipped in for an eagle on the 18th that would have forced a playoff but then missed his birdie putt as well to finish with a 67.

McIlroy increased his lead in the Race to Dubai standings to almost 400,000 points ahead of Danny Willett as he seeks his third title in four years.

“It’s always disappointing whenever you have a chance to win and you don’t play well enough to do that,” McIlroy said about his final round. “I’ll be going away from this tournament very disappointed with how I played today. But I’m still playing two more events this year and I feel like my game is good enough to give myself two opportunities to win again.”