US Senior Open: Heavy Rain Pushes Final Round to Monday 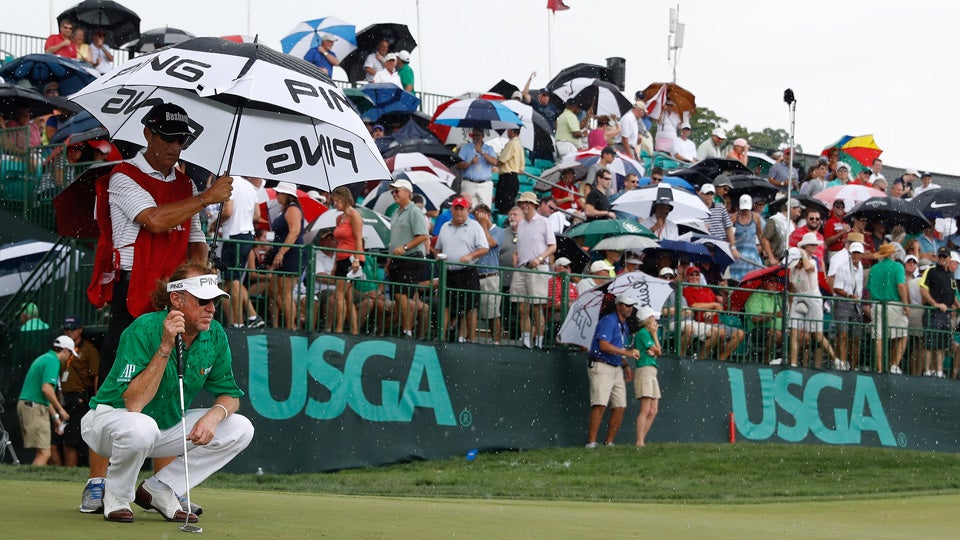 UPPER ARLINGTON, Ohio (AP) — The final round of the U.S. Senior Open was postponed Sunday because of heavy rain, giving Miguel Angel Jimenez another night to sleep on the third-round lead.

The course at the Scioto Country Club absorbed 2.36 inches of rain late Saturday and Sunday, leading to the decision late Sunday afternoon. The USGA had hoped to get at least the first groups through during a break in the rain on Sunday, but the course was too wet to play.

Rain was forecast for Monday, too. The first groups are scheduled to off at 7:30 a.m.

”We’re going to have a drying period overnight, and we think we’ve got a shot to get it in tomorrow,” said John M. Bodenhamer, the USGA’s senior managing director of rules, competitions & equipment standards.

Jimenez was at 3-under 207 on Jack Nicklaus’ boyhood course, a stroke ahead of Gene Sauers, and in position to win after blowing leads in his last two tournaments.

Three weeks ago at Carnoustie in the Senior British Open, the 52-year-old Jimenez took a four-stroke lead into the last day, only to shoot 75 and tie for third – three strokes behind winner Paul Broadhurst. Last week in the 3M Championship, The Spanish player was a stroke ahead entering the final round and ended up losing when Joe Durant shot 63 and eagled the first hole of a playoff.

He said the delay in finishing the tournament is inconvenient more than anything else.

”I think all the people have the same effect, you know?” he said. ”And everybody wants to finish a tournament on Sunday. That’s with everything. It will affect hotels, flights and everything. So anyway, we have to do what we have to do.”

Ian Woosnam, Loren Roberts and senior newcomer Billy Mayfair were tied for third at 1 over.

The 53-year-old Sauers said a delay and a soggy course won’t change how he’ll approach his round Monday.

”You have to just keep hitting fairways and greens and give yourself opportunities,” Sauers said. ”I’m going to the range a bit right now and try to work out things, try to work the ball left to right, vice versa, and try to figure out how I feel today,” he said. ”I wasn’t too comfortable yesterday. So I’m going to try to see where I feel today and hopefully continue it into tomorrow, just kind of not think about things and just kind of relax and clear my mind of all what’s been happening today, because I was ready to play today.”

Bernhard Langer, tied for sixth place at 2 over, said some adjustments will be necessary Monday after the dry, hard course they played in the first three rounds.

”It will play quite different because it was pretty firm,” Langer said. ”So (we’ll) probably get plugged balls in the fairways, mud balls. So don’t know if they’ll play preferred lies or not, and the greens will be softer, might spin balls back off the green instead of going over. So things like that. It will be different.”