The ultimate golfer’s guide to Georgia: Where to play, stay and eat 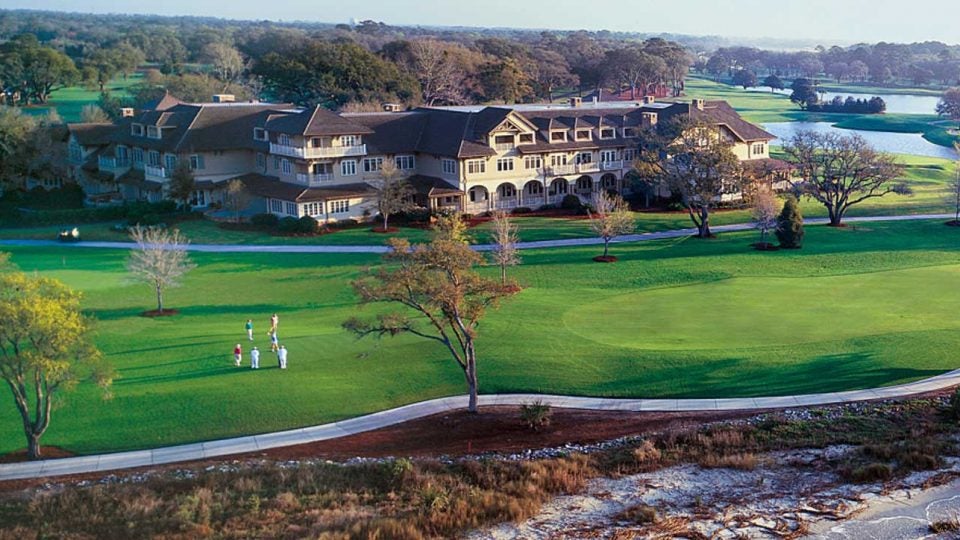 Most golf fans think of Georgia as the hilly, forested, landlocked home of the Masters and the Tour Championship, but those in the know have long flocked to its other dynamic regions, as well. The east coast, roughly 100 miles between Savannah and Jacksonville, Fla., sports handsome beaches, dark lagoons, golden marsh grasses and moss-draped live oaks. The Lake Oconee area, virtually midway between Augusta and Atlanta, bursts with rolling terrain and lake-centric fun. With the Masters’ Southern charms beckoning, here’s a guide to the best of the best in Georgia.

Sea Island’s Seaside course soared after a 1999 Tom Fazio makeover that knitted together a nine-hole, Colt/Alison–designed Golden Age classic and a less distinguished nine from the “70s into a formidable track that now hosts the PGA Tour’s RSM Classic. Huge bunkers, low dunes, firm fairways and several Atlantic Ocean views lend an Old World, linksy feel to the course, especially when the breezes blow. You’ll need to stay at Sea Island Resort to get aboard, but it’s worth the splurge. ($235)

At the northern end of coastal Georgia, in Savannah, is the Club at Savannah Harbor, a Troon-managed resort course from Bob Cupp and “Slammin’ Sammy” Snead that played host to the PGA Tour Champions’ Legends of Golf from 2003–2013. The senior set did battle with a flattish, hazard-laced layout situated along the Savannah River, with stellar views of the spectacular Talmadge Bridge. ($79–$135)

Sea Island Resort, the top-ranked property in the South and a Platinum Medal winner in our most recent Premier Resorts Awards, features easy beach access, pampering service and best-in-show accommodations at (among many options) the Lodge and the Cloister. April rates from $589.

Take a Savannah River–view room at The Westin Savannah Harbor Golf Resort & Spa, feast on the grouper and she-crab soup in the Aqua Star restaurant, relax in the aptly named Heavenly Spa, and catch the free river ferry into town. As Larry King used to say, you can thank me later. (April rates from $239.) westinsavannah.com

Dining in the South is awfully addicting, so don’t start a diet on your way there. Southern Soul Barbecue in St. Simons Island, co-owned by area resident Davis Love III, is a happy spot for slow-cooked smoked meats. For chandeliers, white linens and special occasions, the jackets-required Georgian Room at The Cloister, Georgia’s only Forbes Five-Star restaurant, is the place. Oh, and don’t miss sampling the region’s signature dish, Brunswick Stew, a savory concoction of tomatoes, beans, corn, okra and meat (usually pork or beef in the Georgia version).

Georgia’s Golden Isles, comprised of Brunswick and four barrier islands (St. Simons Island, Sea Island, Jekyll Island and Little St. Simons Island), are ideal for boating, fishing and beach activities. Don’t be surprised to run into locals such as Love, Zach Johnson, Matt Kuchar or any one of 25 Tour players who live and/or train at Sea Island.

Savannah is rife with superb restaurants, but make time to explore its Historic District as well. It’s been more than two decades since Midnight in the Garden of Good and Evil put Savannah on the A-list of tourist destinations, but its enticements remain strong today. Exploring Forsyth Park, strolling River Street and rolling down the Savannah River on a riverboat are popular options.

Davis Love and his Love Golf Design team have signed on to renovate Sea Island’s venerable Plantation course. Comprised of the resort’s original Walter Travis nine (dating to 1927) and a Dick Wilson nine (from 1960), the layout first benefited from the Rees Jones touch in 1997. Love and his brother Mark will enhance the classical feel while adding more strategic features. Completion is expected in late 2019.

If you’ve got any well-connected friends, Atlanta is a haven for outstanding and historic—and, alas, private—tracks. Among the greatest are Tour Championship venue East Lake, U.S. Open and PGA Championship site Atlanta Athletic Club, and Peachtree, the collaboration between Bobby Jones and Robert Trent Jones Sr. None of Atlanta’s public-access spreads are in that league, but you won’t go hungry. Jack Nicklaus created 18 replicas of his favorite personal designs to form Bear’s Best Atlanta in Suwanee ($49–$120). Standouts include versions of two legendary, watery par 3s, the 15th at PGA National’s Champion course and the 12th at Muirfield Village. Cherokee Run in Conyers ($21–$51.50) is a demanding Arnold Palmer design within the Georgia International Horse Park, with remnants of the 1996 Summer Olympics cross-country steeplechase scattered throughout the course. The formerly private Echelon in Alpharetta ($69–$84) is a muscular, wooded Rees Jones creation with elevation changes, bold bunkering and panoramic long views.

Walk in any direction in downtown or midtown Atlanta and you’ll find a superb hotel. From the Four Seasons to the St. Regis to the Omni at CNN Center (and at least 20 others), there are top accommodations waiting. The biggest surprise in recent months is the demise of the city’s best hotel, The Ritz-Carlton, Buckhead. Once home to the top-ranked dining room in Georgia and to visiting celebrities, it’s been redesigned and rebranded as of December 2017 as The Whitley. The allure of the shops, restaurants and nightspots in trendy, terrific Buckhead remains. For an actual Ritz-Carlton, venture to the downtown location, nine miles away.

The list of Atlanta attractions is so long you’d be better off taking separate vacations, one for golf and one to see the rest of “The ATL.” On the dining front, South City Kitchen Midtown remains a stalwart with its ideal blend of Old South (fried chicken, fried green tomatoes and stone-ground grits) and New South (catfish reuben sandwich, veal cheeks) cuisine. Atlas at the St. Regis leads the pack of newcomers, and its year-old sibling, the Tavern at Atlas, is wowing Buckhead diners with its small-plate fare and handcrafted cocktails. Still, for that celebratory buddies-trip meal, Bone’s remains Atlanta’s quintessential clubby, old-money, big-city steakhouse.

If you encounter a rainy day or your golf game goes too far south, check out the Atlanta History Center, the Georgia Aquarium and the King Center (preserving the legacy of Martin Luther King Jr.).

Named for Atlanta’s favorite native son and greatest golfer, Bobby Jones Golf Course had become a tired, 85-year-old muni by the time it closed on Halloween 2017. In the fall of 2018, it will be reborn in stunning fashion. This Buckhead-area layout will benefit from a $23 million facelift that will unveil a brand-new, nine-hole reversible championship track. It’s the final design project from Atlanta-based architect Bob Cupp, who passed away in 2016. Also included will be a nine-hole “wee links,” with holes of 50–70 yards, and indoor and outdoor practice facilities. For an ideal blend of traditional Southern charm and decor with just enough modern bells and whistles, the Partridge Inn is the place to nest. The 108-year-old, 144-room property enjoyed a multimillion-dollar renovation that was completed in November 2015. It has retained its classic accents, from the original woodwork to the ceiling tiles, but the Partridge sports updates to its iconic veranda, one of the best Masters gathering spots this side of Augusta National’s oak tree, as well as to its guestrooms, lobby and revitalized P.I. Bar and Grill. (April rates from $159.)

There are places in town with more ambitious cuisine, but none with a better vibe than TBonz on Washington Road. True, the waits can be arduous, and there’s little room to move, but no one seems to mind, thanks to proprietor Mark Cumins, who blends conviviality and professionalism like few restaurateurs anywhere. The steaks are superb, the service terrific and you’ll spot more major golf figures, from players to broadcasters, than any place other than the grounds of Augusta National.

In August 2017, power brokers at Augusta National ponied up an undisclosed sum (rumored to be $25–$30 million) to purchase land from neighbor Augusta Country Club. The added acreage will allow for construction of a new back tee at the par-5 13th at Augusta National, should the club choose to do so.

Reynolds Lake Oconee in Greensboro is the anchor tenant in this superior golf mall, with six magnificent courses, five of them offering public or resort access. While the Landing, the Preserve and the 27-hole National are stellar, the standouts are Great Waters, a 1992 Jack Nicklaus design that features nine holes on the lake, and Oconee, a 2001 Rees Jones creation that closes in dramatic fashion, with several heroic holes along the water. ($160-$280; $245-$330 Masters week.)

Located 76 miles east of Atlanta and 72 miles west of Augusta, on 20,000-acre Lake Oconee, the Ritz-Carlton Reynolds is a boutique-sized property with gigantic golf offerings. Considered an outdoor paradise by many, Reynolds serves up boating, fishing and golf, but it basks in Ritz-Carlton refinements on the accommodations and service fronts. Highlights include a refurbished spa and fitness center, along with tummy-pleasing dining at Georgia’s Bistro, the Linger Longer Bistro and Gaby’s by the Lake, accessible by land or water. Don’t miss one of the Reynolds community’s newest eateries, the National Tavern at the National Clubhouse. Delectable bites include Truffle Risotto Fritters. (April rates start at $459.)

With no recreational amenity overlooked, few voluntarily choose to leave the Ritz-Carlton and the Reynolds Lake Oconee Community. One good reason to do so is to check out the nearby Harbor Club development. The highlight at Harbor Club is a 27-year-old Tom Weiskopf/Jay Morrish design that features tumbling terrain and outstanding lake views. ($69-$125; $80-$179 Masters week)

Starting in June 2018, Nicklaus Design, led by associate Chad Goetz, will undertake a total renovation of the already sterling Great Waters. Bunker and water-feature improvements are in store, as are regrassed tees, fairways and greens, cart-path refinements and improved irrigation. Great Waters is expected to reopen in autumn 2019.