The Course I’m Thankful For: Meats (and murder?!) in Michigan 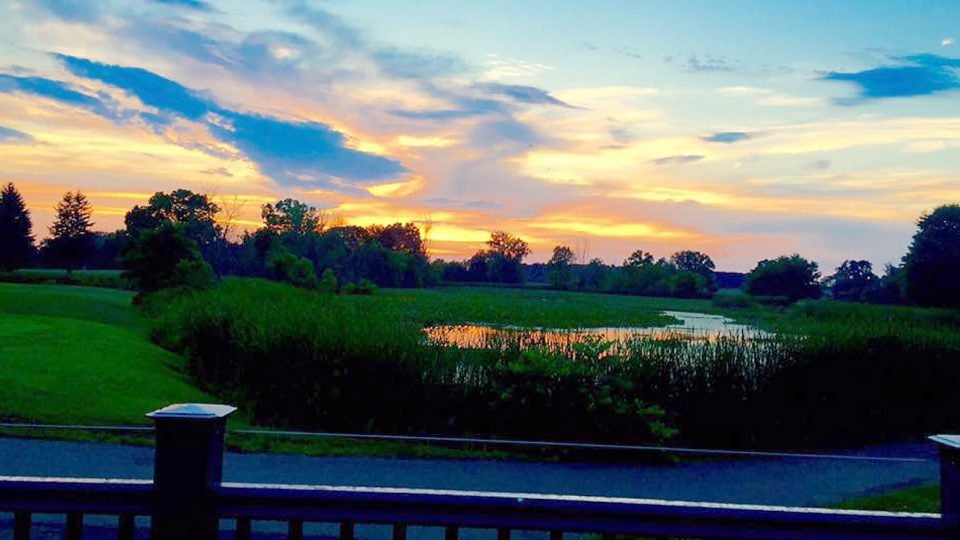 This risk-reward par-5 at Olde Mill Golf Club is tantalizing, even at sunset.

This is the fifth installment in our 11-part “The Course I’m Thankful For” series, in which we asked GOLF.com staffers to wax lovingly about the first course that stole their hearts. Be sure to check back daily to feast on a new essay — or simply binge-read them all when you awake from your turkey coma. Happy Thanksgiving!

When I was 16 years old I needed a job to fill the tank in a certain ’89 Ford Taurus. A few miles from home, on the outskirts of Schoolcraft, Mich., was the Olde Mill Golf Club, one of two public courses in my tiny town. I played on my school’s golf team, and a gig as a “cart boy” provided some walking-around money and unlimited free golf. The next architecture award Olde Mill wins will be its first, but it’s tree-lined and charming at 6,200 yards. The par-5 risk-reward opening hole, a dogleg-left with a forced carry over a pond that got longer the more you tried to bite off, was the first hole that left me captivated. Many summer nights, when the coast was clear, I’d stand on the tee and rifle range balls through the darkness and into the pond, trying to cut even more off that corner.

After a year parking golf carts, I was given a plum gig flipping burgers and brats at a propane grill that golfers passed while making the turn. For two summers, I spent weekends on a wood deck, sautéing sausages, schmoozing members and scarfing down meat sandwiches whenever my stomach emitted so much as the slightest rumble. When John Daly won the 1995 British Open at St. Andrews, I was on that deck, squinting through a clubhouse window to catch the ending on a TV near the bar. Along the way, I developed a fully loaded burger with bold barbecue sauce and scratched “Ritterburger” on the grill’s chalkboard menu. Golfers ate ’em up.

The club’s most churlish member — let’s call him Dave — drove a flashy convertible, and each visit he made to the grill was an early lesson in how to handle difficult personalities (later, these teachings would serve me well on the golf beat). Late in the summer of 1996, Dave was competing in the annual member-guest and arrived at my grill bombed on Miller Lites and Marlboros. He was in a hurry to get to the 10th tee, and I was caught unprepared. Our conversation has stayed with me forever.

“Give me one of those f—— Ritterburgers,” Dave hissed.

“I just got cleaned out. Meat’s on the grill, but it’s frozen,” I said.

“Close enough! Give it to me!”

And so I peeled from the grill a burger patty that was blood-red with small ice chunks still dangling from it. I remember slathering it in ketchup and mustard and slapping on a couple of pickles to hide its grotesque color, shoving it into a bun and handing it to him. The next week I left for my freshman year of college and never saw Dave again. It’s possible the burger killed him, but even if he survived that afternoon I fear Dave’s hard-living tendencies may have caught him eventually. By the way, what’s the statute of limitations on murder by processed beef?

I moved out of state after college but have returned to Olde Mill a handful of times. They flipped the nines, but the hole over the pond, now No. 10, brings back a flood of memories. I still can’t resist trying to cut too much off that corner. There’s also a grill still waiting at the turn. The Ritterburger is no longer on the menu.