The Best Courses You Can Play for Under $100 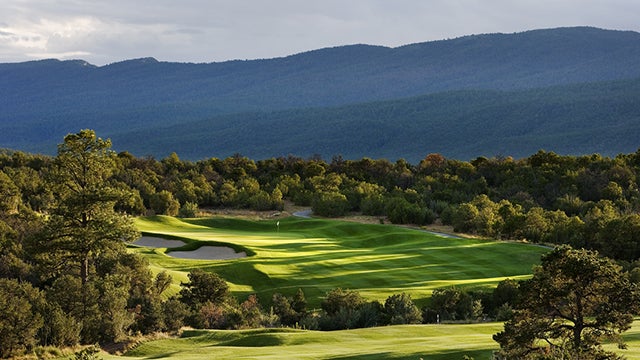 Great golf doesn’t always have to cost great sums. If you’re in search of variety, views and especially value, here’s the list for you — the 10 best courses you can play for less than a Ben Franklin, at least four days a week, no matter where you’re from or what time you show up. (Rates shown are for high season, mid-morning play except where otherwise noted.) Situated between 6,500 and 7,000 breathtaking feet on the eastern side of the Sandia Mountains, 25 minutes from Albuquerque, Paa-Ko dishes out a series of option-laden desert jewels that tumble through junipers, cedars and pines, forming a surprisingly green backdrop to many holes. In prime time of April to October, it’s just $62 after 2 pm.

Nobody really wants to play Florida golf in the summer, but for $40 at a Tom Fazio masterpiece, we’d play all summer long. With its forced carries over sandy waste areas and pine-framed, risk/reward holes, Pine Barrens is intended to resemble Pine Valley. It’s an hour-plus ride north of Tampa into Nowheresville, but even at high season, mid-winter prices, World Woods is well worth the journey.

From the remains of a rock and sand quarry in an old iron ore mine, architect Jeff Brauer forged a Paul Bunyan-esque challenge in the northeastern Minnesota wilderness. Many holes tee off atop gigantic sand piles and play up, down and around cavernous pits, giant boulders and vast sand waste areas, all at a price tag that’s been chopped to bits by a pickaxe.

Situated 45 minutes east of Columbus, this gift to the masses from its legendary basket-making parent is a 1999 Arthur Hills design that mixes open and wooded holes, all flawlessly groomed. The downhill plunge at the par-5 5th and the long par-4 8th that’s backdropped by a lake are two of the Midwest’s best.

This Carnoustie of the Corn Belt tumbles through windswept, treeless terrain, where half the battle is keeping the ball from scooting into links-like bunkers and tall native grasses. It has been called the public Sand Hills, which comes as no surprise, because course architects Dave Proctor and Dave Axland were instrumental in helping Bill Coore and Ben Crenshaw bring Sand Hills to fruition.

It may not sport a floating island green like its neighbor up the road, but this bird has everything else in its nest, including wetlands, grasslands and Ponderosa pines, plus unparalleled solitude disturbed only by the stray elk or moose. Circling Raven also sports a modest green fee that enhances the tranquil ambience.

Sunday River is carved from dense stands of hardwoods and pines and dishes out sandy waste areas, mountain brooks and 400 feet of elevation change. Plenty of grin-inducing vistas of the Mahoosuc Range await, including a dandy at the 443-yard, par-4 18th. An autumn visit is pure sensory overload.

Situated in the state’s far west, this 2001 Jim Engh creation rolls out one visually arresting hole after the next, with no two the same. As a quartet, the par-3s rank among the game’s most memorable, with holes 8, 12 and 17 offering vertigo-inducing plunges. A horseshoe-shaped rock wall frames the eighth; the 12th is backdropped by the Colorado National Monument.

Perhaps the best bang for the buck in the United States, this Gil Hanse/Jim Wagner/Geoff Shackelford design 45 minutes north of L.A. engages at every turn, thanks to an easy-to-walk routing with tremendous variety that allows for run-up shots galore. Rustic can be had for the laughably low price of $36 Monday through Thursday, $39 on Friday and $59 on the weekend — all after 11:00 am.