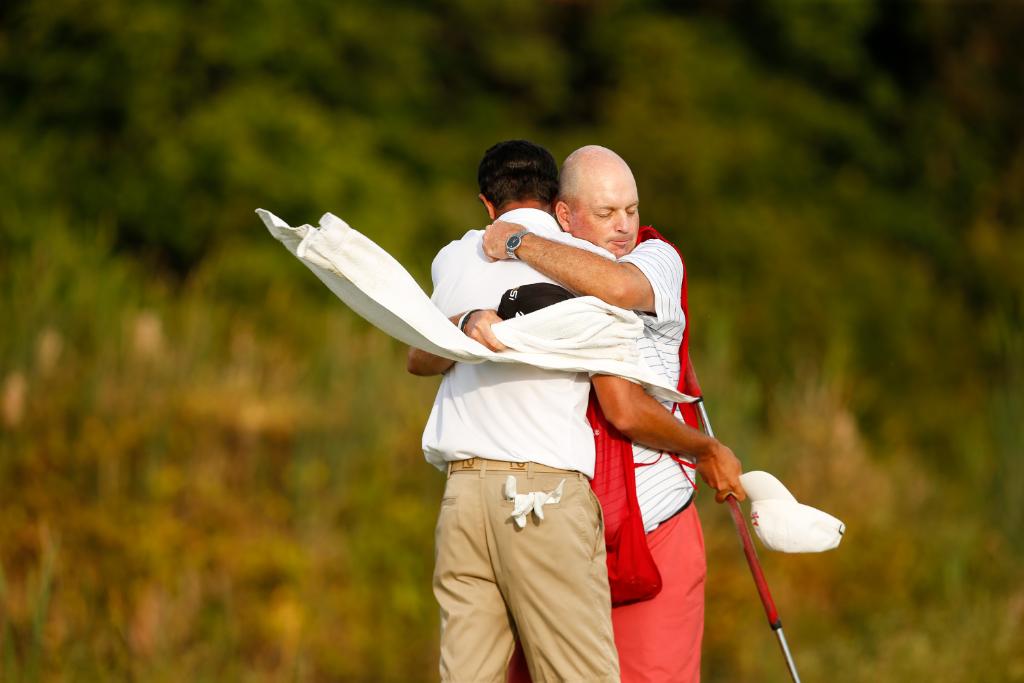 Hagestad, the 25-year-old former Southern California player from Newport Beach, California, won four of the final five holes of regulation – all with birdies – and finished off Harvey on the par-3 37th with a spot in the Masters at stake at Stonewall Links.

“It’s an absolute dream come true,” Hagestad said. “This is something I’ve dreamed about ever since I can remember, and it’s an honor and a privilege to represent Mid-amateurs around the country and to have won the championship.”

STEWWWWWYYY!!!!!!!!!! So pumped for my dude @s_hagestad on winning the Mid-Am. Such an unbelievable comeback #masters #champ

“I had him right where I wanted him,” Hagestad joked.

“Just keep chipping away at it,” Hagestad said. “I didn’t want to go to sleep tonight knowing I left anything out there, or I wanted to leave everything I had out there. Just one hole at a time, one shot at a time. And I was hitting it pretty darn well I felt like for the last couple days, and if I could just see a couple putts go in the hole, I felt like I could get the ball rolling.”

Recapping the top moments from the 36th #USMidAm Final. pic.twitter.com/fR1pNsnWIE

The 38-year-old Harvey, from Greensboro, North Carolina, won the 2014 title. He missed a 15-foot birdie try on the 37th hole before Hagestad holed the winner from a foot closer.

“I’m fine,” Harvey said. “I mean, I’ve been here before and had some tough losses. It’s one thing to completely give it away, and it’s another to get beat like that. He just made some incredible birdies coming in.”

Hagestad is planning a practice round at Augusta National with friends Jordan Spieth and Justin Thomas. “That’s probably one of the first phone calls I’m going to make,” Hagestad said.

For the first time in USGA championship history, the stroke-play, co-host course was used in a 36-hole championship match. The first 18 holes were played on the par-70 North Course and the afternoon round was on the par-70 Old Course, the site off all of the other matches.

Don’t care about the video quality I’m so hyped for Stew @bighag on winning the Mid-Am! Winning 4 of the last 5 to get into a playoff then making birdie the first playoff hole to win. So sick man!! Congrats #Champ #TheMasters