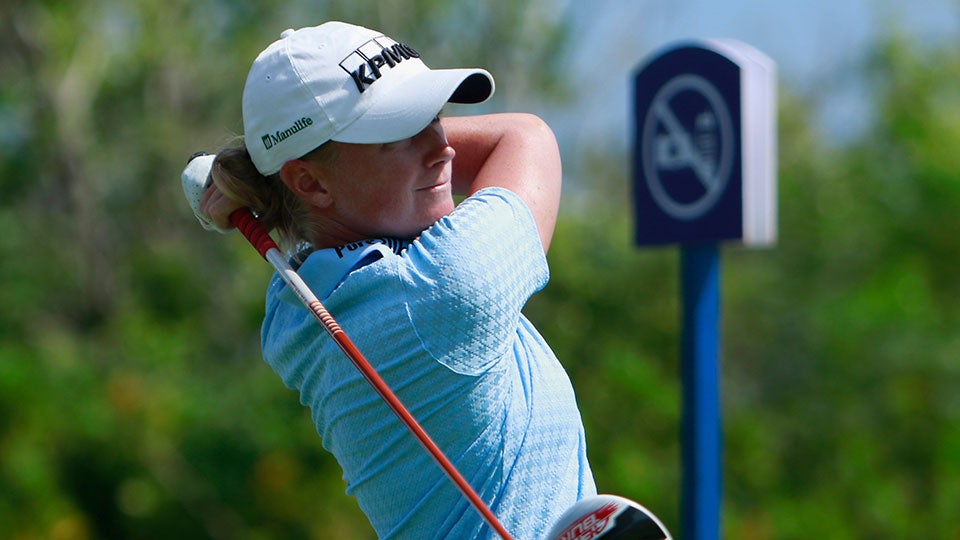 Stacy Lewis of United States tee off at 12th green in round 3 on Day 6 of Blue Bay LPGA 2015 at Jian Lake Blue Bay golf course on October 31, 2015 in Hainan Island, China
Getty

”As far as tomorrow, I would like just to simply survive the day,” Kung said.

It has been so tough in the Blue Bay LPGA that the 34-year-old Taiwanese player and South Korea’s Sei Young Kim topped the leaderboard Saturday at even par.

Only two of the 78 players broke 70 and there were 11 rounds in the 80s. The players averaged 76.282 to push the three-day mark to 75.733. With more wind and possibly rain Sunday, the tournament could be the first with an over-par winner since Birdie Kim won the 2005 U.S. Women’s Open at 3 over at Cherry Hills in Colorado.

”If you can really get close to even par, you can probably win it,” Kung said.

Kung bogeyed the final two holes for a 1-over 73, and playing partner Kim shot a 74.

The wind makes it hard for players to hit into good positions on the large, undulating greens, with their firmness making it even more difficult.

”This is probably one of the hardest courses I’ve ever seen,” Kung said. ”The course itself is full of slopes and sometimes it really feels like you’re taking a roller-coaster ride.”

Third-ranked Stacy Lewis was third at 1 over. The American bogeyed the par-5 18th for a 73.

”I think the weather is going to be even worse tomorrow, so it’s really more of a mental test than anything,” Lewis said. ”It’s not even really patience. It’s accepting what the golf course gives you. It’s hard to describe even how hard it is. I mean, it’s probably some of the hardest conditions I’ve ever played in with the wind and this golf course.”

Since winning the last of her 11 titles in June 2014, Lewis has finished second seven times, including playoff losses this year in the ANA Inspiration and Canadian Pacific Women’s Open.

Playing into the wind just off the South China Sea, Kung failed to reach the green on the 127-yard 17th and left her chip 20 feet short. She three-putted the par-5 18th, missing a 4-foot par putt.

”I really am very much distraught with the windy conditions,” said Kung, trying to win for the first time since 2008.

Kim also bogeyed the 17th, missing an 8-footer after driving through the green. The tour rookie won playoffs this year in the Bahamas and Hawaii in events also played in strong wind on tropical seaside layouts.

”This is the toughest course I’ve ever played,” Kim said. ”This is really, really tough.”

Norway’s Suzann Pettersen was 2 over along with American Kim Kaufman, Canada’s Alena Sharp and Japan’s Haru Nomura. Pettersen birdied the 18th in the final group for a 75. Nomura had a 72, and Kaufman and Sharp shot 74.

”It was the worst day by far,” Kaufman said.

Taiwan’s Hsu Wei-ling had the best round, a 4-under 68 to jump from a tie for 42nd into the tie for eighth. Playing the back nine first, she had six birdies in a 30, then played her second nine in 2 over with three bogeys and a birdie.

Ko won the LPGA Taiwan by nine strokes Sunday to regain the No. 1 spot from Inbee Park. The 18-year-old New Zealander has a tour-high five victories, winning three of her last five starts.