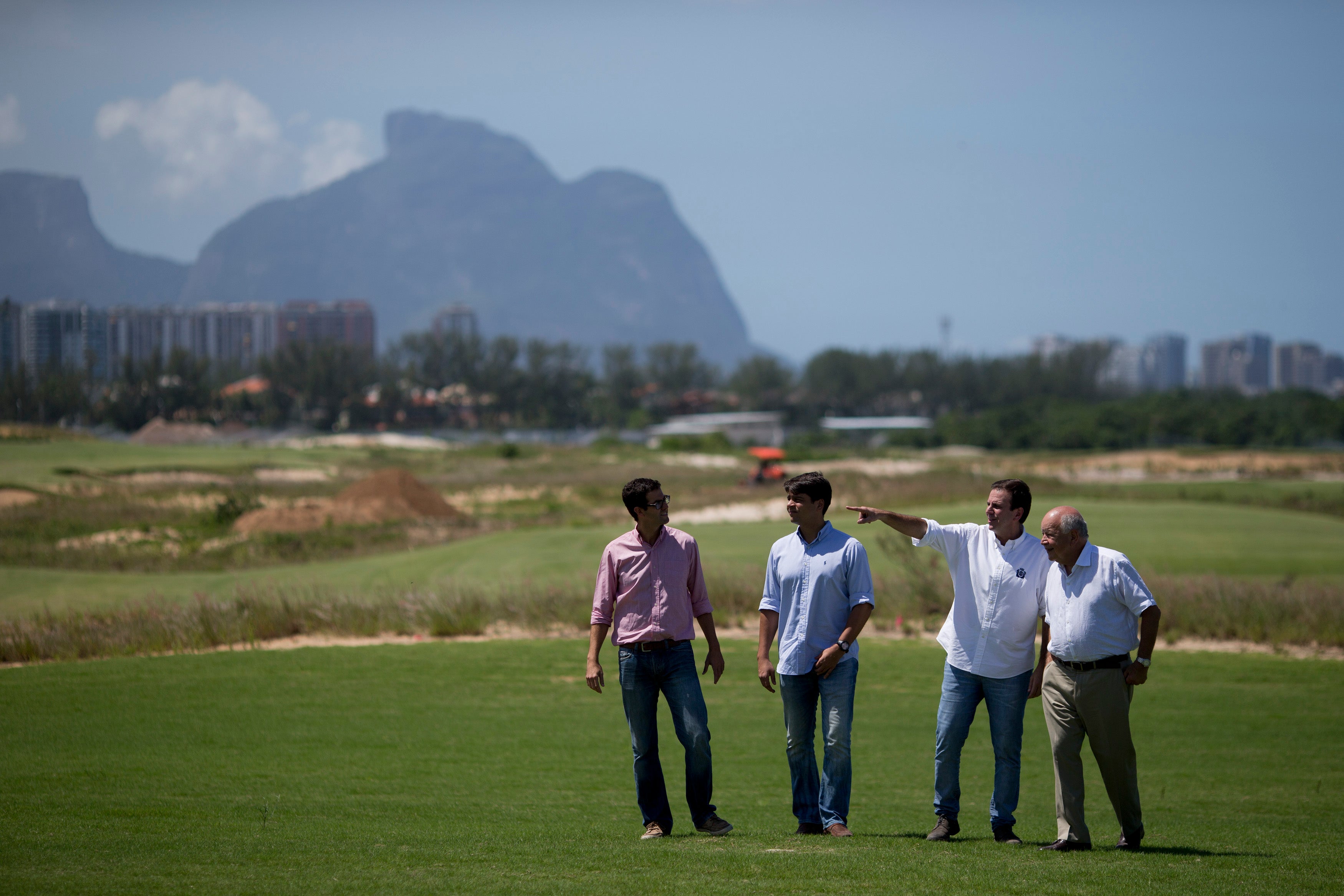 RIO DE JANEIRO (AP) — Rio de Janeiro’s mayor unveiled the city’s controversial Olympic golf course on Wednesday and laid out an ardent defense of a project that has been criticized by environmental activists and is at the center of legal wranglings.

The course, part of which has been carved out of a nature reserve, had been kept strictly under wraps during a construction phase that is nearly complete after more than a year’s work.

Gently rolling hills covered with lush grass that looked like it would be at home in Scotland surrounded small islands of native plants. Sprinklers were hard at work under a harsh midday sun during the visit by news media.

The bucolic setting has been embroiled in a controversy stretching back years that has overshadowed what was meant to mark golf’s triumphant return to the Olympics after a 112-year absence.

Prosecutors have repeatedly requested for work on the course to be halted over alleged irregularities in environmental impact studies, though a judge rejected the latest demand late Tuesday night. In a separate case, another prosecutor is weighing whether to bring charges against Mayor Eduardo Paes for allegedly granting concessions to developers. Still other questions persist about the ownership of the land.

Paes dismissed the allegations, insisting in an agitated, two-hour-long presentation that the course has been built in strict accordance with the law.

“It’s hogwash, it’s a lie … it’s a fallacy,” Paes said, as he delivered a barrage of facts, figures, photos and images of documents about the golf course. “Lies cannot prevail.”

He pledged total transparency, with Brazil in the midst of an investigation into a massive corruption scheme at the state-run oil giant, Petrobras, which has rocked the country with near-daily revelations.

“Rio City Hall and I personally are very conscious that we are going to have to explain and re-explain (things) and prove ourselves more than we would have to if we were staging the London Olympics, for example,” he said.

Paes also insisted that while some land from the nature reserve was bulldozed to make way for the course’s grassy knolls, because the lion’s share of the terrain used to be a sand quarry, the course has actually increased the amount of native plant life in the area.

“Does this look like an environmental crime?” he exclaimed, arms akimbo, as he led reporters over the course’s spongy grass. Earlier, Paes projected aerial photos from the 1980s apparently showing what’s now the golf course dotted with concrete structures.

Environmentalists contend that hardy subtropical vegetation had since retaken the area and that before the bulldozers descended it had become home to several endangered species, including species of butterflies and frogs.

“He (Paes) thinks that all green’s the same,” said Jean Carlos Novaes, a member of the Golfe Para Quem (Golf For Whom) group that has been protesting outside the site for months. “But non-native grass is just not the same thing as the native ecosystem.”

Novaes, who was among a small group of protesters on Wednesday, insisted it was unnecessary to build a new course in the first place, since Rio already has two other golf courses — despite golf’s status in Brazil as an unpopular sport played almost exclusively by the moneyed elite. The owner of one of the courses has said he wrote to authorities to offer it up for the Olympics but never heard back.

Novaes said that donations made to Paes’ political campaign by a wealthy and powerful developer who’s building luxury residential towers on the margins of the golf course were the real motor behind the construction of the course. The exclusive marble-and-glass units are being pre-sold even before construction is completed for several million dollars a piece.

Asked whether he had received a campaign donation from the developer, Pasquale Mauro, Paes said he didn’t know and that in any case “it wouldn’t have been illegal.”

He added that one of the existing courses was deemed too small, while modifications to the other would have cost nearly as much as building the new course.

Paes also brushed aside questions over the ownership of the land, contending that much of the wealthy western suburb of Barra da Tijuca, where the course is located, is beset by long-running conflicts over land ownership.

Attorney Alberto Murray Neto, a former member of Brazil’s Olympic Committee, dismissed Paes’ explanations, saying it made no sense to press ahead with construction of the course on such legally complicated land.

“Even if they had to build a new course, they could have picked any other terrain — one not in a protected nature reserve — or also one where the ownership is clear,” Murray said. “The whole thing is just a pretext for land speculation.”