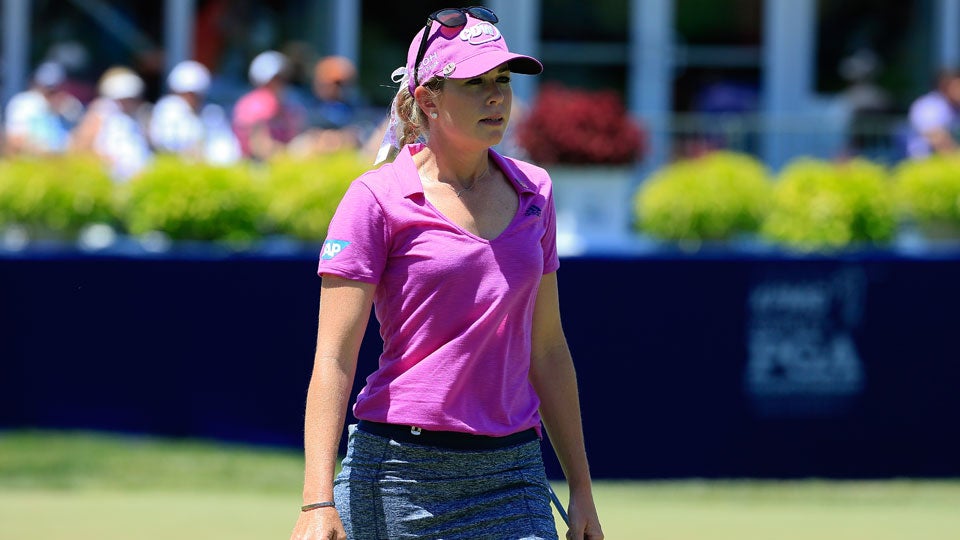 Paula Creamer looks on at the 18th green during the third round of the KPMG Women's PGA Championship held at Westchester Country Club on June 13, 2015 in Harrison, New York.
Getty Images

Creamer has one LPGA Tour victory in the last five years, but she brings plenty of experience. She has played on every Solheim Cup team dating to her rookie season in 2005 and has a 12-6-5 overall record. Lang will be playing in her fourth Solheim Cup.

Lang and Creamer were the next two available players from the Solheim Cup standings.

”They add a lot to the team not just as far as golf, but chemistry and experience,” Inkster said. ”They are very competitive players. Paula has been in a little bit of a funk but I expect her to be out of it and ready to go. B Lang has been playing really good. I’m looking forward to it and I think the team is really stoked to get over there and turn the tide a little bit. We are going there as underdogs, but we are going to go in there and fight for everything.”

Europe won on U.S. soil for the first time in 2013 at Colorado Golf Club and has won the last two events. The Americans still have an 8-5 overall lead in the series.

Among the players Inkster skipped over were Mo Martin, who won the Women’s British Open at Royal Birkdale last year, and Austin Ernst, who captured her first LPGA title in Portland last year. Neither has played in a Solheim Cup. Both were slightly ahead of Creamer on this year’s money list.

Inkster has only one rookie (Lee) and five players who have competed in at least five Solheim Cups. Wie, meanwhile, has been coping with injuries and hasn’t won since her U.S. Women’s Open title last year at Pinehurst No. 2.

Caroline Hedwall of Sweden, Karine Icher of France, Caroline Masson of Germany and Catriona Matthew of Scotland all return to the team, having helped Europe to a record 18-10 victory over the U.S. in Colorado in 2013.

They join Suzann Pettersen of Norway, Gwladys Nocera of France and Charley Hull and Melissa Reid of England, who qualified from the Ladies European Tour points list, and Anna Nordqvist of Sweden, Azahara Munoz of Spain, Sandra Gal of Germany and Carlota Ciganda of Spain, who earned their spots by their world rankings.

“Now I can really start focusing on the week and making sure we’ll have a great week there,” Koch told The Associated Press in a telephone interview. “There’s still lots to do.”

Koch, who was on Europe’s winning teams in 2000 and 2003, said she was excited by the mix of youth and experience she had gathered together. She has been diligent with her preparations to date, spending time with victorious Ryder Cup counterpart Paul McGinley.

“It’s great to have him, to be able to ask questions and get some advice from him,” Koch said. “He’s given me a lot of good tips. Our situations are quite similar going into the event so it’s been very helpful.”

Europe is looking for a third consecutive victory, having captured back-to-back Solheim Cup titles for the first time in 2013, but Koch said past success had little influence on the present.

“This is a new event, this is Solheim Cup 2015. We don’t have to concentrate so much on the past. We concentrate on this event,” the 44-year-old Swede said.

Hedwall became the first player to win five out of five matches in 2013 and she retained the cup for Europe by winning the 14th point. The 26-year-old Swede was also on Europe’s winning team in 2011.

Icher was on the 2002 and 2013 teams so this will be the 36-year-old’s first Solheim Cup appearance on European soil.

Masson earned 2 1/2 points as a Solheim Cup rookie in 2013 and is looking forward to defending the title in her home country.

“It’s been a huge goal to make the team for the last two years and I have been waiting for that call, to see what decision Carin would make. When she told me I was a pick I was super happy,” the 26-year-old Masson said.

Matthew is the most experienced player in the team at age 46, along with Pettersen, and she will be taking part in her eighth Solheim Cup.

“World ranking-wise they’d come out ahead of us so in that respect you might call them favorites but it’s home soil for us and we’ve won the last two so we’ve got momentum,” Matthew said. “I think it’s going to be close and hopefully we’ll just edge them out.”

Koch highlighted the importance of the Solheim Cup to women’s golf and women’s sport in general.

“It’s huge,” she said. “We can see with the preparations for this event how big the Solheim Cup has become. It’s our chance to showcase women’s sport or women’s golf in Europe and around the world.”