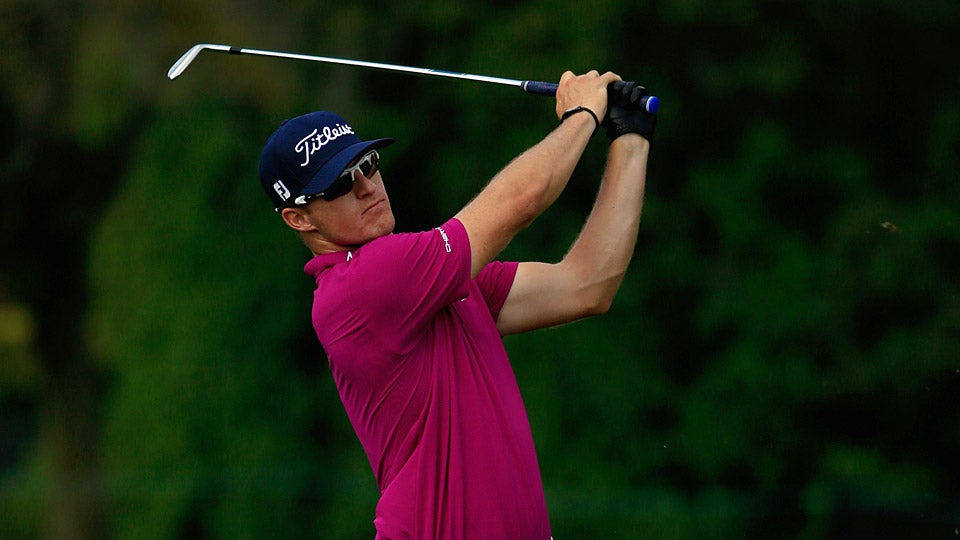 Morgan Hoffmann during the first round at Bay Hill.
Getty Images

ORLANDO, Fla. (AP) — Morgan Hoffmann’s day began with news that his 97-year-old grandmother died Thursday morning. It ended with his first lead on the PGA Tour.

Hoffman began his round with a 35-foot birdie putt on No. 10 and finished it with a 9-iron that touched the hole before stopping inches away for birdie. He also holed a bunker shot for eagle on the par-5 sixth, leading to a 6-under 66 and a one-shot lead in the Arnold Palmer Invitational.

It all was a lot to chew on for the 25-year-old Hoffmann, who cooks his own meals to eat on the golf course (bison steak was for lunch Thursday).

“Mentally, I’m in kind of a weird state right now,” he said. “My grandma passed away this morning, so I’m just pretty chilled out there and loving life right now. Just wish my family the best at home. My whole family texted me and said, `Nanny is playing golf with pop up there,’ which was pretty cool.”

Hoffmann hopes to attend a memorial service for Dorothy Lionetti in Ft. Lauderdale on Saturday night. It should be a short trip considering Hoffmann pilots his own plane that he recently bought from his buddy David Booth, who plays left wing for the Toronto Maple Leafs.

He was inspired to be a pilot after meeting with the tournament host during the Palmer Cup in 2009.

Hoffman, clearly, is not the garden variety PGA Tour player.

“I have a lot of stuff you guys didn’t ask,” he said with a perfect smile.

Not to be forgotten was his golf. He had a one-shot lead over five players, including Ian Poulter and Kevin Na. The group at 68 included Adam Scott, Henrik Stenson and Brandt Snedeker.

Poulter, who made an eagle from just off the 16th green, had his own distraction. His 3-year-old son was taken to the hospital Wednesday night with a low oxygen level and pneumonia. It was a long night, with a bit of a scare, but Joshua was doing better Thursday morning.

“I suppose it was a blessing, last tee time off,” said Poulter, who was in the afternoon group of starters.

Rory McIlroy hit 17 greens in regulation in his Bay Hill debut and one-putted only two greens, including a 15-foot birdie on the 18th for a 70. McIlroy two-putted from 18 feet for birdie on No. 6, and his lone bogey came with an approach into the water on the par-5 16th. He twirled the club when he saw the splash, though it stayed in his hands.

In his third American event this year, the world’s No. 1 player still hasn’t broken 70. But he’s getting there.

“Seeing signs of my game that I like,” McIlroy said. “Another three days of hopefully solid golf and try and get into contention, and that will put me in a good place going into Augusta.”

Hoffmann also is headed to Augusta National for the first time, courtesy of making the Tour Championship last year on the strength of a pair of top 10s in the FedEx Cup playoffs. He just hasn’t followed up on his finish at the start of this season, with no top 10s in nine tournaments.

But after missing the cut at Innisbrook, he spent 12 hours at home in south Florida hitting balls and trying to hit cut shots to stop the aggravating two-way miss. The work appears to be paying off. He missed only two fairways and four greens, none by a great length.

Twelve hours on the range can be exhausting, and when asked if he had at least stopped for lunch, Hoffmann shared his culinary preferences.

He cooks the night before and packs six small meals to eat during the day. The only thing missing is the cutlery, even for a bison steak. “Barehanded it,” he said. He limits his carbohydrates to brown rice and sweet potatoes, along with some vegetables. On the road, he picks hotels with a small kitchen.

“I just figure it’s better than eating candy bars or protein bars,” he said. “I have real food out there.”

Hoffman, who went to Oklahoma State, first met Palmer at the 2009 Palmer Cup at Cherry Hills. The King shared the importance of a legible autograph (he worked on that) and his affection for flying. Palmer was among the first golfers to fly his own plane and only gave up the controls four years ago.

So it felt only fitting that his first lead after any round on tour would come at the Arnold Palmer Invitational.

“It’s awesome,” he said. “Arnie has inspired me very heavily since 2009 when I played the Palmer Cup at Cherry Hills, and we talked for about an hour about flying. He’s inspired me to get my pilot’s license and fly myself to tournaments, which I’m now doing. It’s pretty cool, and he’s been a big inspiration in my life.”