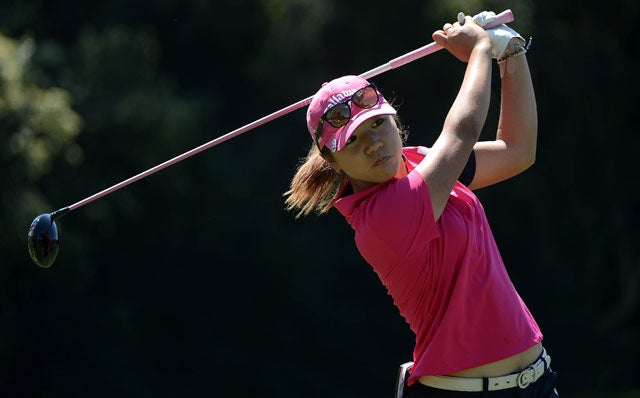 Lydia Ko of New Zealand hits an approach to the 12th green during the second day of the LPGA Australian Open at Royal Melbourne Golf Course on Friday in Melbourne, Australia.
Getty Images

MELBOURNE, Australia (AP) No.1-ranked Lydia Ko of New Zealand, helped by a chip-in eagle, took a share of the second-round lead Friday with South Korea’s Jang Ha-na and Ariya Jutanugarn of Thailand at the Women’s Australian Open at Royal Melbourne.

The 17-year-old South Korean-born Ko, playing her second tournament since becoming the youngest golfer, male or female, to earn the top ranking, shot a three-under 70 while Jang finished with a 69 and Jutanugarn had a 71, giving the leaders 36-hole totals of 6-under 140.

American Jessica Korda, the 2012 champion at Royal Melbourne, shot 71 and was in fifth place, three strokes off the lead and tied with South Korean Amy Yang, who shot 70.

Ko began the day two strokes off the lead and pulled level when she holed out with a 9-iron from 125 meters on the par-4 15th hole.

She was upset with herself on the 15th tee after only taking par on the preceding par-5 hole, which she eagled in the first round.

”That anger led me to hit an aggressive drive on the 15th,” said Ko. ”I was so upset from the hole before that I gambled. A little bit of anger is good because it lets the steam out, whereas sometimes I’ve had experiences where I’ve kept it in and it’s definitely not helped me.”

The 22-year-old Jang, in her rookie year on the LPGA tour, finished tied for second last month at the Coates Championship.

The 18-year-old Hull’s mostly good round was offset by problems on the sixth green, where she missed putts twice from less than three feet.

”I just four-putted that hole, it just didn’t go in,” Hull said. ”I had a couple of three-putts as well. It’s just a learning experience for me. Sometimes I can get a bit ahead of myself and do silly stuff like that. But then I feel I concentrate well afterwards and try and get them back.”

Last week at the Australian Ladies Masters, Hull was in a shared tied for the lead going into the final round before triple bogeying the sixth hole, including an air swing and a penalty drop. She finished tied for second, three behind Australian winner Su Oh.

Oh opened with a 79 at Royal Melbourne and had a 78 Friday to miss the cut. Defending champion Karrie Webb also had a 78 but finished right on the cut line of 5-over 151, 11 strokes behind the leaders.