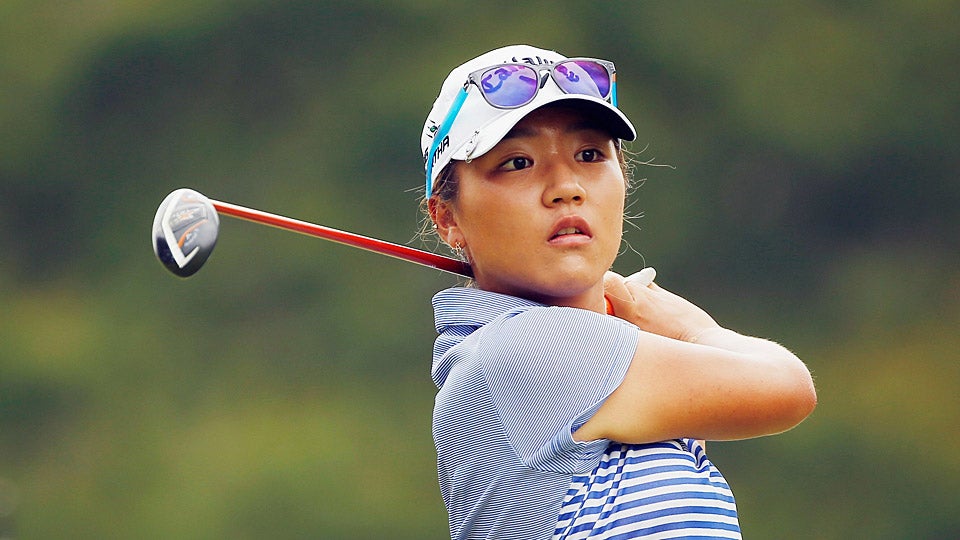 Lydia Ko is the top-ranked female golfer in the world.
Getty Images

PHOENIX (AP) — Lydia Ko was tired after a long day at the JTBC Founders Cup.

”It’s going to be an early night tonight,” Ko said.

After waking up at 4:50 a.m. and waiting out a four-delay because of rain and wet conditions, the 17-year-old New Zealander shot a 6-under 66 on Thursday at Desert Ridge for a share of the lead in the suspended first round.

”I had a little nap and then had a second breakfast,” Ko said.

She rebounded from a three-putt bogey on the seventh hole with a 12-foot birdie putt on the eighth to join Tiffany Joh, Sophia Popov and Kim Kaufman atop the leaderboard.

”Because it was soft, it was more receptive,” Ko said. ”Like hole No. 12, I hit my 3-hybrid and I was still pin-high. You might lose some distance with the drives, but then you can be a bit more aggressive to the greens.”

After the long delay at the start, only half of the 132 players finished before play was suspended because of darkness.

”Luckily, I got the update for the delay before I left,” Joh said. ”I was actually driving out of my host family’s house in Desert Mountain and right when I got the email alert.”

The top-ranked Ko has broken par in her last 21 tour rounds and 24 worldwide, a streak that started in her victory last year in the season-ending CME Group Tour Championship.

”I just try and take one shot at a time, one round at a time,” Ko said.

She didn’t dwell on the three-putt bogey from 8 feet on No. 7 or two late birdie putts that stopped just short – a 30-footer on the sixth and a 12-footer short on nine.

”I guess everything balances out,” Ko said. ”I hit the pin with my chip on 18 that could have been a much further par putt. I think 6 under is a good start and I just have got to take the positives out of it.”

She nearly won last year at Desert Ridge, squandering a three-stroke lead with 13 holes left and ending up tying for second – a stroke behind Karrie Webb.

Ko has six LPGA Tour titles and 10 worldwide victories in pro events, winning the Women’s Australian Open and the Ladies European Tour’s New Zealand Women’s Open in consecutive weeks this year. She was second two weeks ago in Singapore, her second runner-up finish of the year.

Joh birdied six of the first 10 holes and closed with eight pars.

”This course, if you hit the ball solid, then you could leave yourself a lot of birdie opportunities,” Joh said. ”I didn’t make a ton of putts. I just kind of hit it close a lot.”

Popov arrived Tuesday after spending last week in a Naples, Florida, hospital because of an infection and the flu.

”The antibiotics are kicking in,” said Popov, the 22-year-old German who helped Southern California win the 2013 NCAA title. ”They are pretty strong.”

In her only other tour start as a pro, she missed the cut in Australia in February.

”You kind of go in and just say, `Try to hit the shots you’re able to, kind of trust the game that you had before you got sick, and then just kind of see what happens,”’ Popov said.

Kaufman is in her second year on the tour. The former Texas Tech player is from Clark, South Dakota.

”Clark is about a thousand people,” Kaufman said. ”Everyone definitely knows everyone. … I’ve got to get back more often. I know they are all 100 percent behind me.”

South Korea’s In Gee Chun and Thailand’s Moriya Jutanugarn shot 67, and the Netherlands’ Dewi Claire Schreefel also was 5 under with eight holes left.

Webb, also the winner of the inaugural tournament in 2011, was 2 under with 12 holes left in her round with 2013 winner Stacy Lewis and 2012 champion Yani Tseng. Lewis was 2 under, and Tseng 1 under.

Michelle Wie had a late triple bogey in a 73 playing alongside Ko. Getting over strep throat and a sinus infection, Wie has broken 70 only once in 15 rounds this season.

“‘The first reaction was like, ‘Oh, great, hole-in-one,'” Molinaro said. ”Then it clicked that it actually was a car, so I think I screamed `car’ in Italian.”