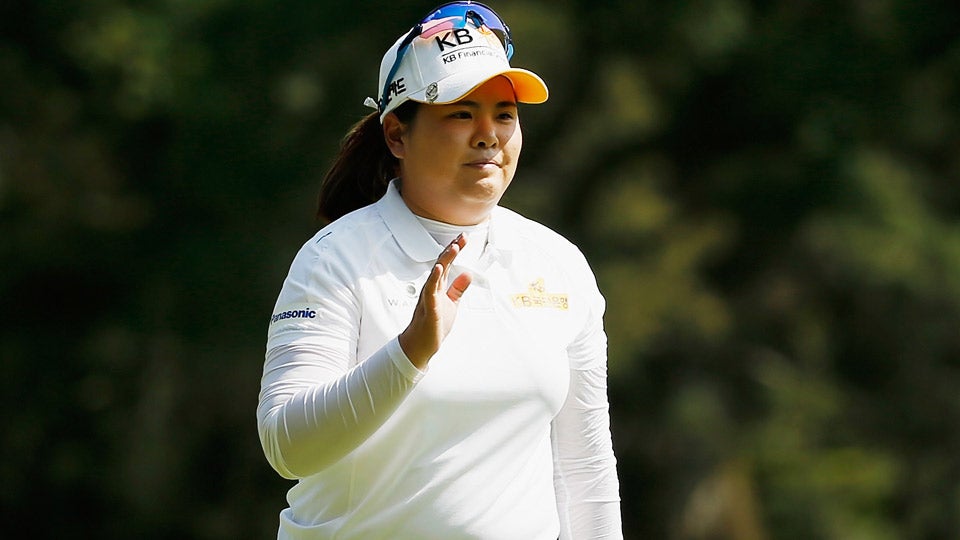 Inbee Park during the first round on Thursday.
Getty Images

MEXICO CITY (AP) — Inbee Park made a 15-foot birdie putt on the final hole for a 4-under 68 and a one-stroke lead Thursday in the LPGA Tour’s Lorena Ochoa Invitational.

The second-ranked Park had seven birdies and three bogeys at tree-lined Club de Golf Mexico. She’s making her first start since withdrawing in China two weeks ago because of a cyst on her left middle finger. The South Korean star has four victories this season, winning two of the five majors.

“I was a little bit worried about not practicing for a few days, but I had a good day today, especially the front nine,” Park said. “It was a good putting day… I felt really good about the putter. I putted really well today it was a good sign.”

Stanford is coming off playoff loss to Sun-Ju Ahn last week in the Asian Swing finale in Japan.

“Tuesday, I felt like I have been hit by a train,” Stanford said about her flight from Japan. “It’s been getting better each day.”

She won the inaugural tournament in 2008 in Guadalajara.

Pettersen was the only player in 36-woman field to have a bogey-free round. The Norwegian won in June in Canada for her 15th LPGA Tour victory. She’s coming off three straight top-eight finishes in Asia.

“It’s just nice to be back in contention and kind of be back where I should be,” Pettersen said. “I should be in contention every week when I feel my game is there. It was a good stretch there to give me some confidence and try to finish out strong.”

The 19-year-old Lee, from Australia, won at Kingsmill in May for her first LPGA Tour title. She took last week off after playing the first four events in Asia.

“I think I really needed that week off when I was in Asia,” Lee said. “I was well-rested and I came in yesterday and did my practice and I was ready to go.”

Lopez is a senior at the University of Arkansas senior. She was second this year in the NCAA tournament.

“I’m just trying to enjoy the moment,” Lopez said. “It’s amazing playing with the top 30 in the world at my home course with my family and the people around me.”

Fourth-ranked Lexi Thompson, the 20134 winner in Guadalajara, had a 73. The winner last month in South Korea for her second victory of the year, Thompson had six birdies, five bogeys and a double bogey.