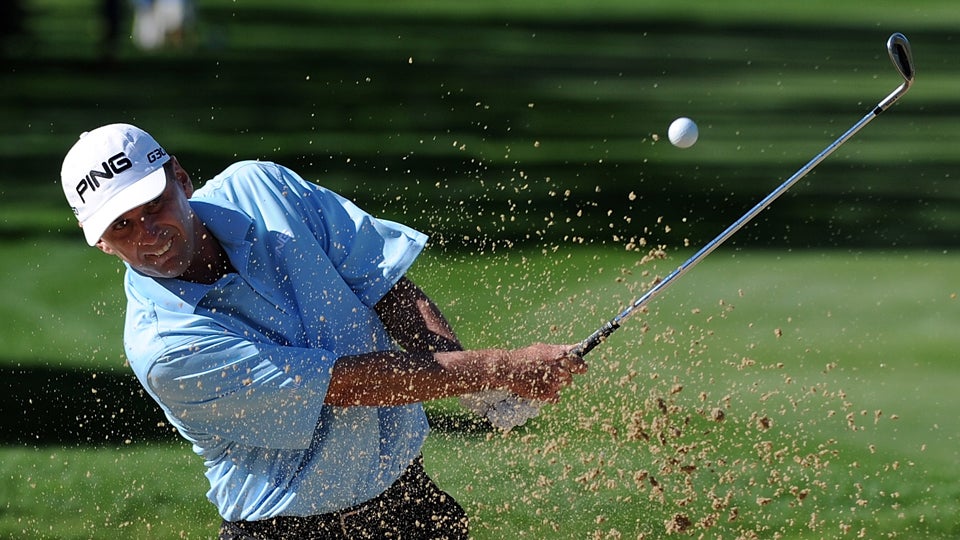 SAUCIER, Miss. (AP) Kevin Sutherland birdied three of the final six holes Saturday for a 5-under 67 and the second-round lead in the Champions Tour’s Mississippi Gulf Resort Classic.

Those birdies pushed him to the top and he protected the lead with key par saves from bunkers on the last two holes, including one from a buried lie and awkward stance on the par-3 17th.

”I didn’t have a stance and the ball’s plugged,” Sutherland said. ”If someone would have given me a 4, I would have taken it. I thought if I could just pop it out I might could run it up to the hole. I was just hoping to get a putt at it and I did and I was fortunate enough to make it. Just ended up in a bad spot but was able to make the best of it.”

Sutherland, the one-time PGA Tour winner who shot the first 59 in Champions Tour history last year in Endicott, New York, chipped in for birdie from behind the 12th green and birdied Nos. 15 and 16.

He had a two-stroke lead over 2011 MGRC champ Tom Lehman, but he doesn’t have the ”hangover” from a record round like he did the last time he took a lead into the final round.

”This is very different, a different mentality,” Sutherland said. ”When I shot the 59, it almost felt like I had won something already. There were all the congratulations, and the million texts and all that stuff and everybody wanted to talk about it, which is totally understandable. It was hard to come out the next day and be focused.

”As much as I wanted to be, I wasn’t as focused as I needed to be. I don’t think that will be a problem tomorrow. Whether I play well or not is a different subject, but I know I’ll be ready to play. At Dick Sporting Goods (Open), I was still living off a hangover from the day before.”

Lehman climbed the leaderboard with a bogey-free 66, highlighted by a 50-foot birdie putt on the par-3 eighth hole.

”You just have to get it over the ridge and then it’s all about gravity,” Lehman said. ”It’s a matter of getting up to the right on the high side in the right spot where it can just trundle on down the hill. It looked perfect from the beginning. It was one of those long putts that at worst case is going to be really close. Within 5 or 6 feet, I thought it was in.

”Those are the kinds of things that happen when momentum is on your side, and to do well in golf you have to have things like that happen. You can’t be perfect all the time. You have to get away with some imperfection and that was certainly one case of that.”

Scott Dunlap had a 65, the best round of the week, to join Colin Montgomerie, Joe Durant, Olin Browne and Woody Austin at 5 under. Montgomerie and Durant shot 72 after sharing the first-round lead. Browne had a 68, and Austin shot 71.

Miguel Angel Jimenez was 2 over after a 70. The Spaniard won the season-opening event in Hawaii in January for his second victory in three career Champions Tour starts.

”It’s a tough course so anybody within five or six shots still has a chance to win with a really hot round,” Lehman said. ”Everybody knows the golf course. It’s a matter of who goes out and enjoys it the most, is the strongest mentally and gets a break or two when then need it and makes some putts.”