‘I saw it while skydiving’: The story behind the viral Eagle Creek fire golf photo 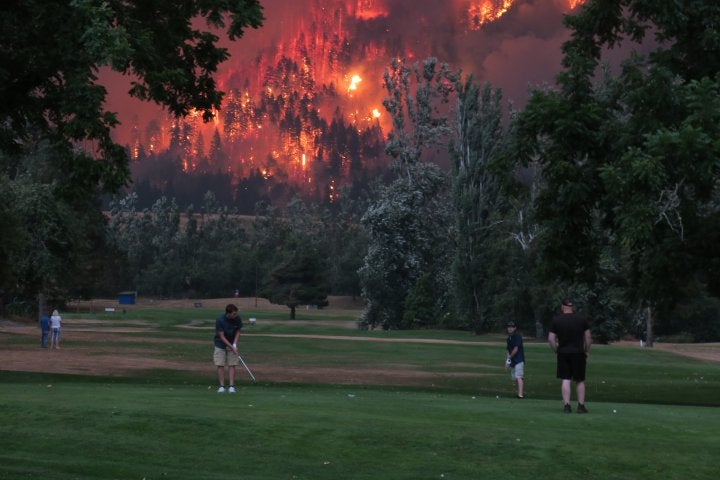 For days, a photo of three golfers putting near what appears to be the setting of Dante’s Inferno in Oregon has been making its rounds on the Internet, with commenters doubting its too-crazy-to-be-real imagery and claiming the picture had been altered. Not so, says amateur photographer and Columbia River Gorge aficionado, Kristi McCluer. And she would know—she snapped the photo of the blazing Oregon fire.

McCluer’s fire story begins before the smoke started rising from trees in Eagle Creek on Saturday, Sept. 2. “I saw it while skydiving,” says the airborne adrenaline junkie. McClure made five jumps that day, and on the third dive she saw a huge, vertical smoke plume rising to the east. By the time she made her next jump an hour later, the smoke had gone horizontal. “You could see it spreading across the sky,” she says. But visibility was still good, so she and her friends got one more skydive in, before calling it a day.

On Sunday the sky was awash with ash, so McCluer was grounded. On Monday, visibility was even worse, so instead of staying home, she grabbed her camera and drove off towards the gorge on the Washington State side, since Oregon’s I-84 was blocked by downed, burning trees. McCluer’s plan was to drive to the Bridge of the Gods, the span closest to the fire that connects Washington and Oregon, and capture images of the burning forest.

But the bridge was closed to traffic, and nearby McCluer saw what she thought was a huge parking lot, full of people watching the blaze. Only it wasn’t a parking lot—it was a road, and the Washington State Police ordered her to stop taking pictures, get in her car, and go find a safe place.
While trying to turn around and head back west, McCluer ended up in the parking lot of the Beacon Golf Course in North Bonneville, Wash., where a few golfers were still on the course. “And I got out and I started taking pictures,” McCluer says. “I thought, ‘This is a good spot, nobody else is around, it wasn’t crowded, there were only two or three other cars and some people golfing.'”

“The golfers and I were not actually in any danger,” says McCluer. “When I was done taking pictures, I walked over to them and we talked about how crazy and surreal and horrifying this event is, but I didn’t get their names or have any real interaction with them. It was just a few words exchanged.”

The Eagle Creek fire was first reported at 4 p.m. on Saturday, and quickly grew to 3,000 acres overnight as winds ripped through the gorge. Hikers were stranded and rescued, and evacuations were ordered for nearby communities over the weekend. After six days, Eagle Creek fire containment is just at 5% says the Oregonian, having burned approximately 31,000 acres, which is about one-third the size of Portland.

The entire Portland metropolitan area has been under a Red Flag Warning and Air Quality Alert since the weekend, and the National Wildfire Coordinating Group estimates the Oregon fire will not be fully contained until Saturday, Sept. 9.

This story originally appeared on Fortune.com.