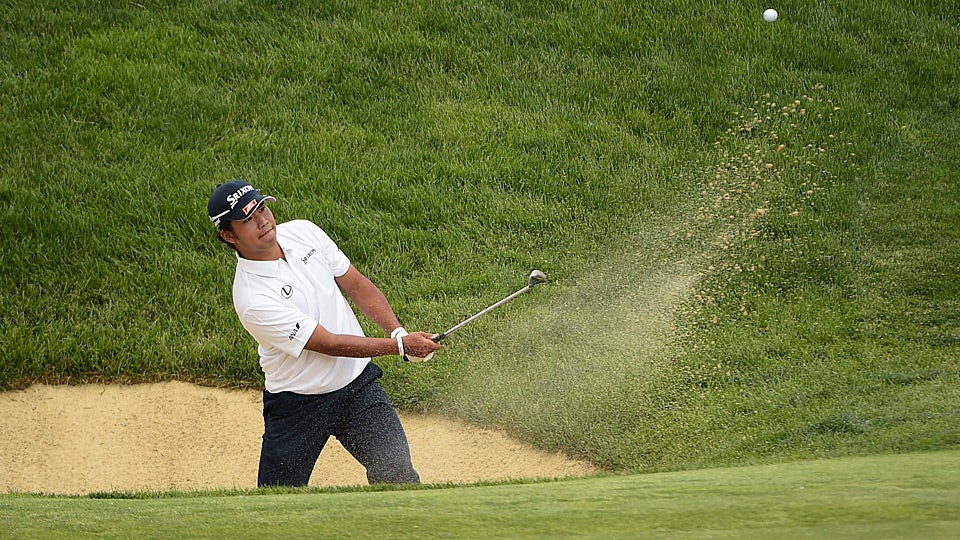 DUBLIN, Ohio (AP) — Hideki Matsuyama was bracing for a rough day at the Memorial and wound up with a share of the lead Thursday.

Matsuyama made a bold start in his bid to join Woods as the only repeat winners at Muirfield Village by running off four straight birdies on the back nine and one strong par save on his way to an 8-under 64 that tied the Japanese star with Bo Van Pelt.

It was a dream start for Van Pelt for other reasons. He grew up across the state line in Indiana and used to play hooky from school to attend the Memorial from the time he was 10 until he got out of high school. Muirfield Village is where he first dreamed about playing the PGA Tour. In calm conditions under an overcast sky, Van Pelt made a career-best 10 birdies for his best score in 41 rounds at the course Jack Nicklaus built.

“Other than the Masters, this tournament means more to me than any one I’ve ever played,” Van Pelt said. “So it’s always good to play well around a place that means a lot to you.”

Woods, a five-time winner of the Memorial, wasn’t sure what he was going to get. He hooked his tee shot and started with a bogey for the eighth time in his last nine starts on the PGA Tour. He went so far right off the tee at the 18th that it went out-of-bounds (the next tee shot wasn’t much better) and made double bogey to go out in 40. He hooked his 3-wood on the first hole. It was looking like another big number.

Instead, Woods battled to save pars and convert birdies, and he salvaged a 73 that left him nine shots behind.

“Physically, I feel good. Mentally, I feel beat up,” Woods said. “To turn that round around like I did today … that was hard.”

He was determined to stick with the changes he is making to his swing under a fourth coach as a pro, no matter how long it takes. Considering he hasn’t had a top 10 in his last 13 events dating to the end of 2013, this could take time.

“I was just trying to stay committed to what we’re working on, to what we’re doing,” he said. “I hit it awful, yeah. So what? I was going to go through this phase and stick with it, keep sticking with it. And some of the shots I hit were really, really good. But then I also had some really bad shots, too. And we need to work on that.”

Matsuyama won the Memorial last year in a playoff. It was his first win in America and validated him as one of the many rising stars in golf.

He said every course on the PGA Tour feels difficult to him, and even when he made a pair of 15-foot birdie putts on his way to a 32 on the front nine while playing with Phil Mickelson (72) and Rickie Fowler (72), he wasn’t comfortable.

“I was just trying to hang on,” he said.

So was Jason Dufner, the former PGA champion, whose tied for eighth last week at the AT&T Byron Nelson ended a stretch of 17 events on American soil without a top 10. He was tied for the lead after making a 60-foot eagle putt on the 15th hole and was still poised to join Matsuyama and Van Pelt at 64 until he pulled his tee shot into the water on the 18th and closed with a double bogey.

That put him at 66, along with Russell Knox, who fed his putts off the ridges beautifully in making seven birdies. 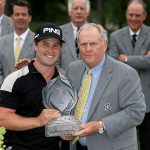 You may also like 2015 Memorial Tournament at Muirfield Village

Harris English and Kevin Kisner were among those at 67. Masters champion Jordan Spieth, who saved the start of his round with a world-class short game, was cruising along until one mistake turned a birdie into a bogey on the par-5 seventh late in his round. He had to settle for a 68.

English (No. 70 in the world) and Kisner (No. 61) each have a chance to do well enough at the Memorial to avoid U.S. Open qualifying next week. Another important start belonged to Patrick Rodgers, who has his last chance to gain special temporary membership on the PGA Tour.

Woods grabbed the most attention for two reasons. He’s Tiger Woods, still enough to attract the biggest gallery. And there remains a mystery about the game of a 79-time PGA Tour winner who has plunged to No. 172 in the world.

Most intriguing about his assessment of Thursday’s round was a stubbornness to see the changes to a conclusion, no matter how long that takes. Previous changes have taken as long as 18 months for Woods to figure it out. Time is no longer on his side, however, not at his age and with five surgeries behind him.

“I’ve gone through phases like this, rounds like this, where yeah, it’s easy to revert back and go ahead and hit some old pattern,” he said. “But it doesn’t do you any good going forward. And I’ve done it. Sometimes it’s taken me about a year and then it kicked in and I did pretty good after that. … If you believe in it, do it. And eventually it will start turning.

“And when it turns, I’ve had periods where I’ve played good for four or five years, where I’ve won close to 20 tournaments in that stretch.”