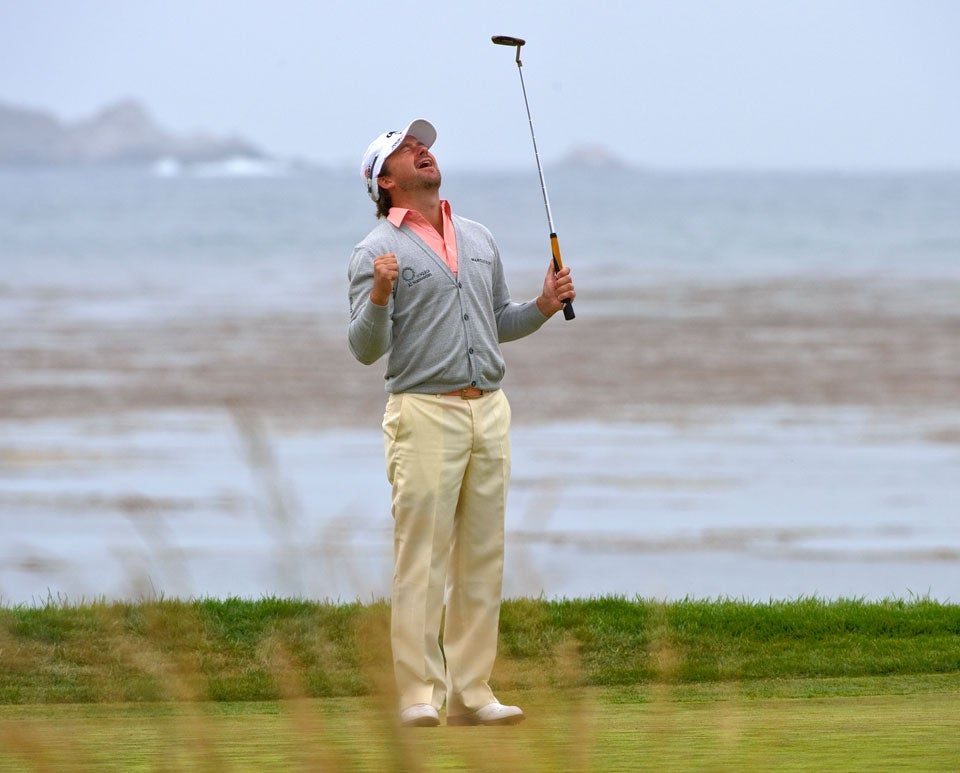 Graeme McDowell is two shots back after a four-under 67.
Streeter Lecka/Getty Images

PLAYA DEL CARMEN, Mexico (AP) — Russell Knox and Graeme McDowell each had six birdies and were tied for the lead before the final round was stopped Sunday in the rain-delayed OHL Classic at Mayakoba, setting up a sprint to the finish Monday in Mexico.

The fourth round was delayed 3 1/2 hours by thunderstorms that left pools of water across El Camaleon Golf Club.

McDowell elected to finish the par-5 13th when the horn sounded to suspend play because of darkness. He made birdie to join Knox at 19-under par.

Knox was still on the 13th hole.

Jason Bohn, who chipped in for eagle on the fifth hole for an early lead, dropped two shots and was at 17 under through 12 holes. Bohn won his first PGA Tour event in 2005 and his next one in 2010. This is his final event of 2015.

The final round was to resume at 8 a.m. Monday.

This will be the first time in 10 years that back-to-back PGA Tour events finished on Monday because of rain. The Sanderson Farms Championship in Mississippi had a marathon finish last Monday because of the weather.

With soft conditions, there figures to be little room for error when Mayakoba ends on Monday.

Scott Brown (through 14 holes) and Derek Fathauer (12 holes) were four shots behind. Fathauer, trying to make it six straight PGA Tour events with a first-time winner, had a one-shot lead starting the final round but had only one birdie against two bogeys to fall back.

Knox is coming off his first win last week in Shanghai at the HSBC Champions, and he was so exhausted that he considered pulling out this week. Instead, he continued his around-the world journey to Mexico. He can become the first player since Camilo Villegas in 2008 to win his first two PGA Tour titles in successive weeks.

The 30-year-old from Scotland ran off four straight birdies starting at No. 3, and then stuffed his approach just short of the pin on the par-3 eighth and went out in 31. He picked up his sixth birdie on the 11th hole.

McDowell has not had a top 10 since the Dubai Desert Classic in February. He chose to end his European Tour season earlier than usual because of a mediocre season, and because he has never fared well on the course for the DP World Tour Championship in Dubai next week.

Along with his three straight birdies on the front nine was a par on the opening hole at El Camaleon. McDowell had played that hole in 5 over through three rounds – two double bogeys and a bogey. This time, he hit 3-wood off the tee.