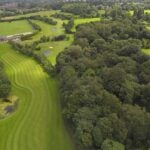 While golf is sometimes associated with tradition and exclusivity, England's Hartford Golf Club is trying to shed that reputation.

When Tyrrell Hatton won the European Tour’s BMW Championship last year, his wardrobe generated more buzz than his play. A hoodie?! On a Tour professional?! How radical!

The “hoodie on the golf course” debate was a hot one, and the discourse continued for weeks. Since then, hoodies have become more common on the course, but there have been some private clubs that have dug their spikes in the ground, taking a stand against the progressive hood wearers.

Take England’s Wearside Golf Club. In the wake of Hatton’s win, the club took the opportunity to issue a reminder to its membership.

“In light of Tyrell Hatton’s recent success and fashion statement and following discussions on this, can I draw your attention to the Clubs dress code and re-emphasize that ‘hoodies’ are not acceptable golf attire for Wearside Golf Club, no more so in fact than designer ripped jeans,” the statement read. “I hope this avoids any unnecessary misunderstandings on this subject.”

Golf-club rules and customs are nearly as old as the game itself, but today there are a growing number of clubs that instead are working to shed the elitist reputation the game has garnered.

Just a couple hours to the southwest of Wearside Golf Club resides its antithesis — Hartford Golf Club. Located in Cheshire, near the Liverpool-Manchester metropolitan area, Hartford GC is a nine-hole semi-private club looking to push boundaries.

“We’re just trying to be quite progressive,” said Paul Cunningham, who serves as the club’s retail manager and runs their social media accounts. “We want to push the game forward.”

Hartford GC first came on GOLF.com’s radar thanks to a viral tweet that has been making the rounds in recent days featuring a sign encouraging golfers to choose tee boxes based on scoring averages rather than gender or age. Intrigued by the forward-thinking proposition, we dug deeper on the club.

Turns out, progressive attitudes toward tee boxes aren’t the only way Hartford has pushed away from golf’s mainstream. The club also abandoned its dress code and now encourages players to come as they please.

Jeans and hoodies are the new norm. No golf shoes? No problem. The folks running Hartford won’t bat an eye.

“Golf is changing, and I think for the better,” Cunningham said. “We’re trying to get rid of a lot of those traditional, outdated rules.”

The club is also beginner-friendly. With skill-adjusted tee boxes, the forward tees on the par-5s top out around 200 yards, making pars and birdies much more attainable for newbies. Better yet, the club encourages novices to play truncated rounds — three, six or nine holes — as they hone their games.

Cunningham likened the process to swimming badges, where progress can easily be tracked with measurable progress.

“We just think that’s the future of golf,” he said. “Why does everyone have to play 18 holes?”

Even if you’ve never played golf before, Hartford is a welcoming place. Anyone can walk into the pro shop and request a set of rental clubs to try out on the range — free of charge.

“Anyone can have a go at golf,” Cunningham said. “We want to get the idea to people that everyone can go on the range — even without any equipment. Wear a hoodie. Wear a pair of trainers. Wear a pair of jeans. We’ll lend you clubs … Everyone started somewhere.”

The reception of this progressive attitude has been largely positive. Hartford had a membership hovering around 300 just a few years ago, but since then, that number has shot up to nearly 500. While some of this can be attributed to the pandemic-related boom the golf industry has enjoyed, the welcoming atmosphere of the club has also been a boon to its success.

“The vibe is much better,” Cunningham said. “We’re trying to grow the game.”