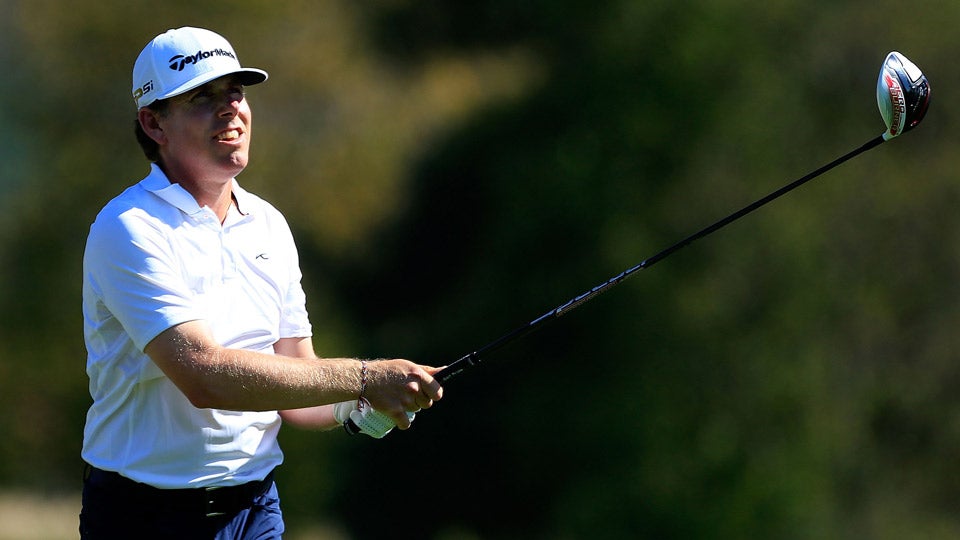 Justin Leonard is one of four players tied at six under at the OHL Classic.
Getty Images

PLAYA DEL CARMEN, Mexico (AP) — Justin Leonard got off to a quick start in what he expects to be his shortest season, opening with a 6-under 65 on Thursday in the OHL Classic at Mayakoba to share the lead with Aaron Baddeley, Shawn Stefani and Derek Fathauer.

Leonard, who moved from Dallas to Colorado during the summer, said he plans to play only 12 events this season to spend more time with his wife and four children. The former British Open champion is using his one-time exemption for being top 50 on the PGA Tour’s career money list.

The 43-year-old Leonard played bogey-free at El Camaleon before the wind and rain arrived and stopped play for 1 hour, 14 minutes. The first round was suspended because of darkness, and 21 players did not finish.

Stefani was a runner-up last year at Mayakoba to Charley Hoffman.

Baddeley, a three-time winner, lost his card last season and failed to get it back through the Web.com Tour Finals. He is playing as a past champion, and got into the Mexico event through a top-10 finish last week. He tied for fourth in the rain-plagued Sanderson Farms Championship in Mississippi.

D.J. Trahan, another past champion, also got into Mayakoba through a top 10 in Mississippi. He was in a large group at 66 that included Charles Howell III and Patton Kizzire, who won the Web.com Tour money title last season.

Leonard is approaching two years since his last top 10 on the PGA Tour. He was born and raised in Dallas, so it was a big move to take the family to Aspen. But it’s part of a bigger plan to make the transition to full-time golf to being with his four children, ages 5 through 12.

“I’ve just been out here 21 or 22 years and my kids are growing up,” Leonard said. “And I get to do a lot of things, but I miss a lot of things, too. We just moved to Colorado in August, and I want to just play the tournaments that I’m excited to go play and see what I can do.”

He referenced Steve Stricker, who in 2013 decided to trim his schedule to be at home more often.

“So many decisions I’ve made over the last 25 years have been about golf,” Leonard said. “So when we started talking about moving, I said, ‘Let’s just take golf out of it. Where are going to be the happiest and most excited when we get on an airplane to go home?’ And we’re there.”

Matt Kuchar, at No. 16 in the world the highest-ranked player at Mayakoba, opened with a 72. He was in the same group as Mississippi winner Peter Malnati, who shot a 68, and HSBC Champions winner Russell Knox, who had a 70.

Knox is playing his fifth straight week, going from Napa, California, to Las Vegas to Malaysia to Shanghai and now Mexico.

Former PGA champions Keegan Bradley, whose world ranking has plunged to No. 65, was in the group at 67 that included Erik Compton, Patrick Rodgers and Graeme McDowell, who overcame a double bogey on his opening hole by making five straight birdies.

The best start belonged to Thomas Aiken of South Africa. Starting on the par-3 10th, he made a hole-in-one and then followed that with two straight birdies. But his round fell apart at the end with a quadruple-bogey 9 on the seventh hole that led to a 74.

Carlos Ortiz of Mexico opened with a 68.