New European Tour chief Keith Pelley has only been on the job for a few months, but we already know one of his main goals for his tenure: ridding slow play from all levels of the game.

“Slow play drives me mad,” Pelley said at the DP World Championship last week. “I have had the chance to talk to a number of players at all levels — the elite, the medium and low-ranked players — and one of the things that keeps coming up, and which we are going to address, is slow play.”

How will the issue be addressed? There’s no official plan of attack yet, but there is a conference call scheduled between the R&A and the European Tour, and Pelley says the issue is high on the agenda.

“I cannot tell you what that means from a concrete perspective right now, but I have had significant dialogue with Martin Slumbers from the R&A, and they are in violent agreement that it is something we need to deal with,” Pelley said. 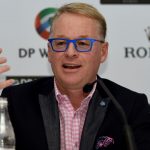 You may also like European Tour Changes Rules to Help Its U.S. PGA Players

Slow play is one of the few ailments that plagues both the professional player and weekend hacker. In a recent study, the USGA found the average round in America takes 4 hours and 17 minutes. Factors that determine the duration of any one round include tee placement, number of golfers in the group ahead and course design. Pro golfers have rules officials following them and can be hit with penalties if they begin to bog down a round, but recreational amateurs face no such penalty. Even with the divide, Pelley is confident change will come in 2016 for both Rory McIlroy and that guy at your club that dresses like him.

“I can tell you that when we sit here next year we will have a completely different philosophy on slow play,” Pelley said. “Slow play is a critical part of our game and we will address it. We are going to be the leaders in dealing with slow play.”