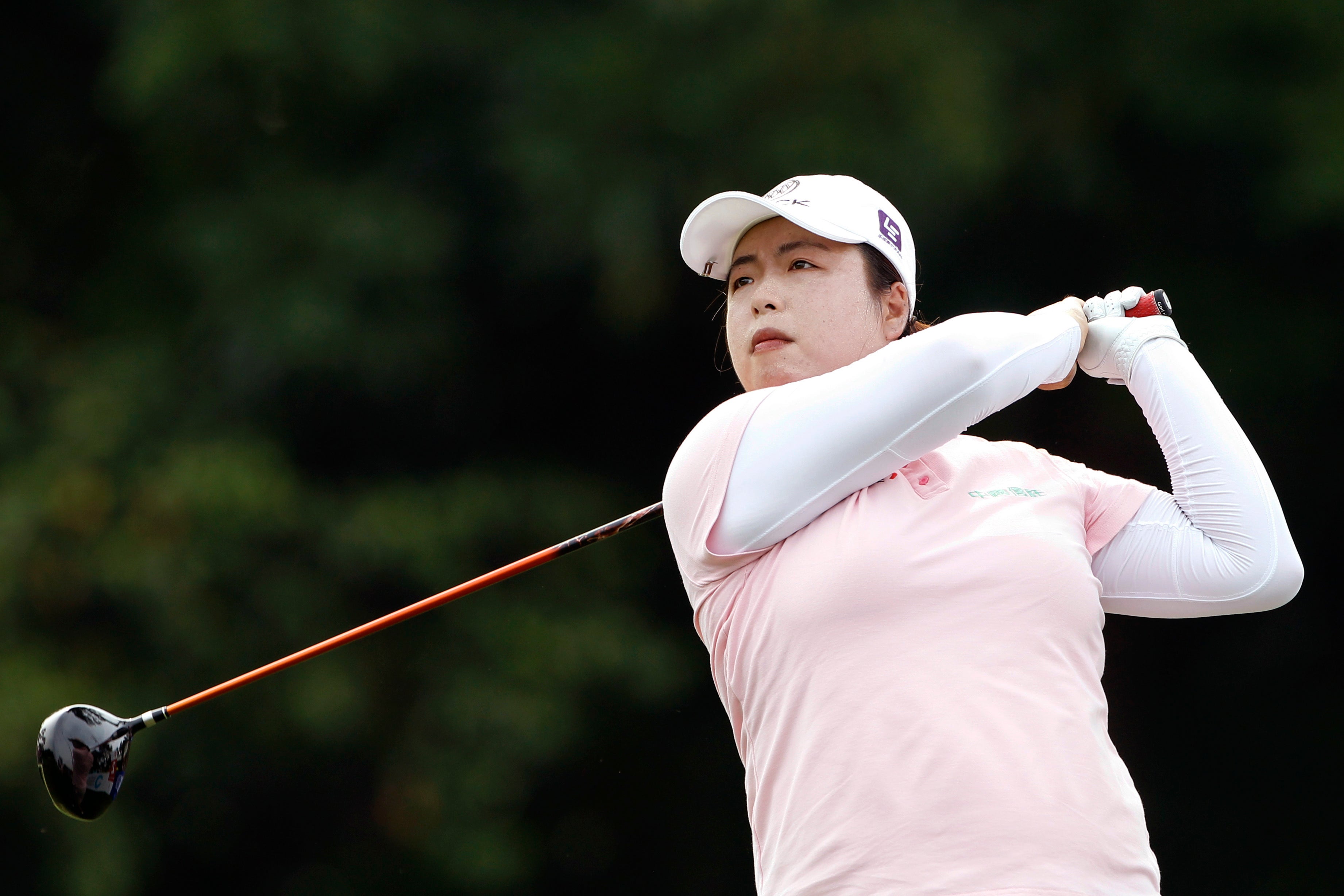 Shanshan Feng of China follows her shot during the third round of the Sime Darby LPGA.
AP Photo/Joshua Paul

The 27-year-old Chinese player had a one-stroke lead over fellow major champion Anna Nordqvist of Sweden. Feng was 7 under for the day and 13 under overall on the 18th tee when play was stopped at TPC Kuala Lumpur. Nordqvist was on the par-5 16th.

”The 18th hole is a tough hole, but it’s good that the pin location is not the toughest today,” Feng said. ”I think maybe I’ll have a full warmup in the morning. Hopefully, then, after I finish the 18th hole, I can go directly to No. 1 and start my fourth round.” Play was delayed for 4 hours, 39 minutes by the lightning and periods of heavy rain, leaving only 90 minutes of light left when the action resumed.

”I just kept eating,” Feng said. ”They kept updating like every 30 minutes, and like after every update, I’m like, `Maybe I’m going out so I should eat more.’ I ate like three or four times before I went out. So made sure that I’m full of energy.”

Feng won the 2014 tournament for the last of her four LPGA Tour titles.

”Coming back here, I’ve had so many good memories that I’m really relaxed and really enjoying the week,” Feng said. ”Of course, I think that really helps me to bring out my `A’ game.”

Feng was third in the Olympics in August, the start of a string of five top-four finishes – the best a second behind Ha Na Jang three weeks ago in Taiwan.

Nordqvist was 5 under for the round. She has six LPGA Tour victories, successfully defending her ShopRite LPGA Classic title in June in New Jersey. The former Arizona State player lost a playoff to Brittany Lang in the U.S. Women’s Open in July at CordeValle.

Amy Yang was third at 11 under with three holes left.

Playing her first tournament since firing caddie Jason Hamilton, Ko rebounded from a bogey-double bogey finish Friday that left her eight strokes back.

”I’ve just got to focus on my game,” Ko said. ”That’s what I tried to do yesterday and today, and that’s how I got to this position, so I think I have to do the same thing for tomorrow.”

Pettersen birdied six of the first eight and made another on 12, then returned from the break to hit into the water and make a double bogey on the par-3 15th. She birdied the 18th.

Michelle Wie was 7 under with three holes left.

Paula Creamer shot a 64 before the storm hit to get to 6 under. The American played the first eight holes in 5 under. She opened with a birdie on 10, bogeyed 11, made four straight birdies, parred the par-5 seventh and birdied the eighth.

”I started on the back nine, second off today, you get really good greens,” Creamer said. ”But I played great. I hit a lot of really good iron shots. Made a lot of good putts. Just tried to keep the momentum going. I could have shot a lot more under par, but I’ll definitely take my 7 under.”

She closed with a triple bogey Thursday in a 72, and had a double bogey Friday in a 71.

”If you take those two things away, I’d be pretty much right in the mix of things and I know that,” Creamer said. ”I’ve been playing well and putting well and my short game is on point. It’s just putting them all together and hopefully I can do it tomorrow.”

Stacy Lewis was 1 under after a 70 in her first event since mid-September.

Second-ranked Ariya Jutanugarn also shot 70, leaving her even par. She has a tour-high five victories – one more than Ko – and leads the money list and the Race to CME Globe and player of the year standings.