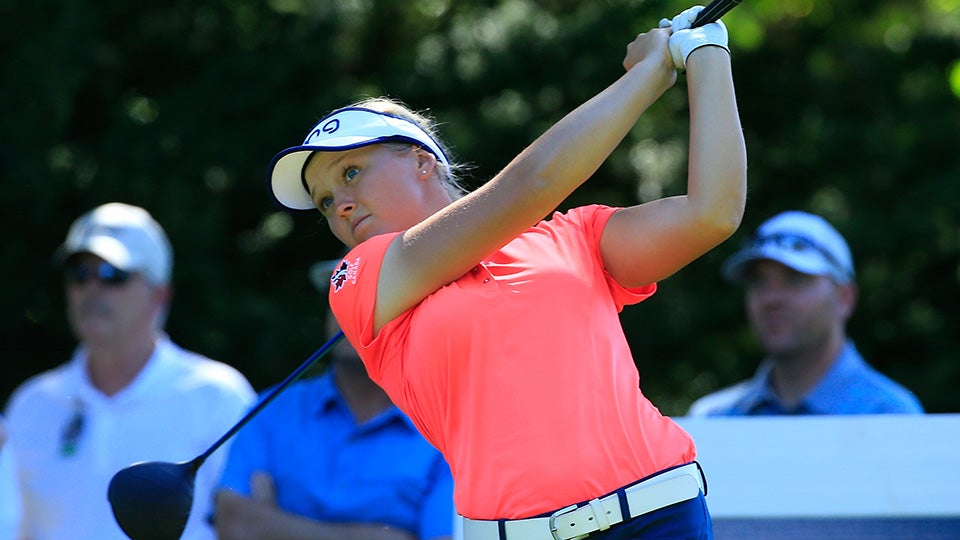 Brooke Henderson of Canada hits a tee shot on the eighth hole during the North Texas Shootout Friday in Irving, Texas.
Getty Images

Henderson shot a 6-under 65 on Friday in the North Texas Shootout, giving the 17-year-old Canadian the lead going into the weekend for the second straight week on the LPGA Tour.

Henderson had a bogey-free round to reach 8-under 134 total at Las Colinas, a stroke ahead of 2013 winner Inbee Park and 54-year-old Juli Inkster.

Denied a waiver to the LPGA Tour’s minimum-age requirement of 18 last year, Henderson earned the last spot in the field Tuesday in a playoff in the qualifier. Last week in California in the Swinging Skirts, she led after the second and third rounds, but fell a stroke short of a playoff that Lydia Ko won over Morgan Pressel.

”Last week, definitely helped out a lot,” Henderson said. ”Finishing third and having a chance to win on Sunday was a lot of fun. I’m excited to be in the same position. Hopefully, it will just turn out a little better.”

RELATED: Check out the Leaderboard Here

On her final hole, Henderson chipped from the rough behind the green toward the pin 20 yards away and sank a 6-foot putt to maintain the lead.

The top-ranked Ko rallied Friday to push her career-long cuts streak to 51, following her opening 75 with a 68 to make it on the number at 1-over 143. The 18-year-old New Zealander was tied for 62nd.

Ko said she was emotional about making the cut heading into the back nine, still at 4 over, because she pledged to donate her earnings this week to the earthquake relief in Nepal.

”All day, I was thinking, you know, make some birdies for the kids in Nepal,” she said. ”I was going to cry after my putt.”

Park wasn’t happy with her putting last week in California and changed clubs. The result: 27 putts on Thursday, 26 on Friday.

”If the putter doesn’t work, you’re just going to walk away with the pars,” she said. ”Hopefully, this putter can stay in the bag a long time.”

After Inkster opened with a 66 to share the first-round lead, she stated she really wasn’t ”looking forward to winning.” Sitting one shot out of the lead going into Saturday, she amended her position slightly.

”I’m just not counting my chickens before they hatch,” said the Solheim Cup captain and 31-time tour winner, most recently in 2006. ”I mean, I’ve got a lot of golf left.”

Michelle Wie was four strokes back at 4 under after a 70. She was 7 under through 12 holes, but bogeyed three of the last four holes.

The field will be cut a second time after Saturday’s play, to the top 50 and ties.