“I want to plan an anniversary trip for my husband. What do you recommend for a romantic golf getaway?” —​Beth, via Facebook

Hmmm…For him, Top 100 golf, preferably 36 a day and a working TV with sports cable channels should suffice…But I like the way you’re thinking. Good golf that you both can enjoy is a must, and a little atmosphere—ocean, mountains, fireplace, culture—wouldn’t be bad either. In the southwest, 10 minutes from my house, I’m partial to the Boulders. Situated in the aptly named town of Carefree, the Boulders rocks with Adobe-style casitas that melt into the desert landscape, highlighted by giant saguaro cacti and prehistoric rocks that give the resort its name. Its twenty-minutes-north-of-Scottsdale location makes it a getaway from the hubbub, bit close enough for attractions and shopping. With its superb spa, memorable golf and practically guaranteed sunshine, your hoped-for good time with your significant other is bound to come off without a hitch.

Further west, the Four Seasons Lanai and its Manele Bay golf course in Hawaii is worth the effort. The ferry ride alone from Maui sets the mood, and the privacy, dazzling Nicklaus design on the ocean and world class service hits all the right notes. Bill and Melinda Gates chose Manele as their wedding spot—that ought to tell you something.

If this is a really special occasion, shoot for the Grand Hotel Villa d’Este, in Cernobbio (Como) Italy. With mountain and Lake Como backdrops, this four-and-a-half-century-old monument to elegance in northern Italy is likely to rekindle the spark. Highlights include frescoed ceilings, graceful gardens, area cooking classes and wine tastings and the nearby 91-year-old golf course, site of 12 Italian Opens. Plus, you’re likely to run into part-time residents Mr. and Mrs. George Clooney, if that sort of thing appeals.

Sure, there are less expensive Couples/Anniversary options—and let me know if you want some—and plenty of worthy East Coast destinations, but since you asked, I’d start with these three sweet properties. “What are the must-play courses in Vegas?” —​Lou Lucatelli, via Twitter

“Must-play” and “should-play” are two very different animals. Must-play indicates that you absolutely cannot miss this course if you’re anywhere near it, even if you have to re-mortgage your house to afford the green fees. In Las Vegas, that’s Shadow Creek ($500), where it still helps to be a sky-high roller at MGM’s properties to get aboard; Cascata ($295-$425), the Rees Jones beauty out near Boulder City and Wynn Las Vegas ($300-$500), right on the Strip. Alas, Wynn is folding up its tent on December 17, to be redeveloped as a lagoon theme park, so in three weeks, it becomes a “must-have-been-played-in-the-past” course. 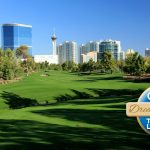 You may also like Dream Weekend: A golf trip to Las Vegas


Stepping up to the top tier of public plays is Rio Secco ($129-$239), recently refurbished by original architect Rees Jones, with guidance from legendary instructor Butch Harmon, who has his school of golf here.

“Thinking about a trip to Pinehurst in January. What kind of shape should I expect the course to be in that time of year and how will the weather be?” ​—​Florian Pichler, via Facebook

Brrr…! I love the warm welcome that the Pinehurst area always delivers, but it will likely be chilly in January. The average monthly daytime high is 50 degrees, with an average monthly daytime low of 30 degrees. So play late in the month and late-morning or midday. Fairways and greens won’t be ideal, in that there isn’t enough sunshine and warmth to promote optimum grass growing, but they’ll be OK. The good news is that many of the region’s top courses are draped atop sandy soil, so it won’t be like playing on concrete—and for those days it rains (the month averages 3.88 inches), the courses will drain well. Bundle up, and enjoy!  [gallery:13667426]

“If I were to plan a golf trip to the Dominican, what would you recommend?” ​—​@BioWino, via Twitter

One of golf’s truly underrated destinations, in terms of quality at the top end, the Dominican sizzles with sunshine and seaside golf. Consider Casa de Campo first, with its “Teeth of the Dog” course. Pete Dye’s favorite of all his designs is also one of his best, with seven holes strung along the Caribbean Sea. Yet, the resort shines throughout, making it the unusual property that’s ideal for both buddies and families. With 81 holes of golf, including Dye Fore, with its bluff-top holes perched above the Chavon River, accommodations that include large hotel rooms and private homes, superb restaurants and a reconstructed 16th century village called Altos de Chavron, complete with cobblestone streets, shops, restaurants and courtyards, Casa de Campo is the complete package. 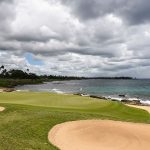 If for whatever reason Casa de Campo doesn’t work out in your plans, Puntacana Resort & Club is equally compelling. The International winner two years ago of a Golf.com reader survey for Best Value and Best for Families, Puntacana rolls out 45 holes of seaside golf from Tom Fazio (Corales) and P.B. Dye (La Cana), a variety of lodging options, from the Westin Puntacana to the more intimate Tortuga Bay and more, and beachside dining. In March 2018, Corales will host the first official PGA Tour event ever to be held in the Dominican Republic.

To be fair, the PGA Tour Champions have visited the Dominican on several occasions, competing at Cap Cana Resort, a slightly more upscale destination that houses a breathtakingly scenic Jack Nicklaus Signature creation called Punta Espada. The 11-year-old layout incorporates bluffs, beach and jungle and wildlife abounds, from an iguana-filled cave to the left of the first fairway to native roosters that strut around like they own the place. What most crow about, however, is the par-3 13th, a 250-yard test that plays directly over the Caribbean Sea.

Finally, the most upscale, perfect-for-couples getaway of all is Playa Grande on the DR’s north shore. Home to the 29-room, cliff-side Amanera Hotel, a romantic, luxe retreat is there ever was one, with sublime service and a secluded location right on a gorgeous white-sand beach, Playa Grande also serves up villas, superior dining and a spectacular, very playable Robert Trent Sr. design that was completely made over by Trent’s son Rees two years ago. Jones the younger has been engaged to make further modifications, moving even more tees and greens closer to the sea and the course will reopen in Spring 2018. 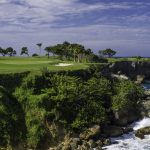 You may also like Dominican Republic’s Playa Grande, the Perfect Golf Resort Experience

February through April are the best months to visit, as that’s when the mix of temperatures, humidity and rainfall are just right, but it’s also the priciest time. May is typically a great compromise, when the crowds begin to disperse, but conditions are still exceptional. Fall is rainiest, December through February is driest and the North Shore gets more rain than the South Shore. Summer, while hot, is tempered by sea breezes. No matter when you go, slather on the sunscreen.

“I’m told Arizona is the place to go in the winter for a golf trip. How does it compare price wise to Florida or Myrtle Beach?” —​Gordon Michaels, via Twitter

By winter, if you mean December 22 through March 21 or so, I’d say Arizona is an outstanding place for a golf trip. In terms of value, however, you’ve asked a loaded question because the spectrum is so broad. Myrtle Beach will be the cheapest alternative, not only because it’s one of the great bargains anywhere, anytime, but because this happens to be shoulder season there, and so is significantly chillier than Arizona or Florida. January daytime highs range from 51-59, whereas Phoenix clocks in at 67 for the month. Orlando, in the center of Florida, runs about 71 for an average high in January. Obviously things warm up a touch in February and then more so in March in all three spots.

So if this trip is all about the bottom line, Myrtle Beach is no contest. If you want to play in shirtsleeves, however, in January/February, Florida is less expensive overall, because there are more courses and more golf destinations throughout the state. Still, if you’re seeking Top 100 trophy courses, the Phoenix/Scottsdale area shines, because so many of the best layouts are public-access. In Florida, most of the top tracks are private, with a few glorious exceptions.

Another plus in Arizona is that the new breed of desert target courses are so distinctive, green ribbons of grass winding through the unique, thorny desert, with mountains in the backdrop. A Grand Canyon State drawback—occasional morning frost delays due to the substantial nighttime temperature drops in the desert. Oh, and don’t neglect Tucson as a legitimate golf mecca. There are far fewer courses and resorts, but they’re all of high quality, very scenic and the munis are priced to where you can play them all winter and still wind up with spare change for your return trip home.

“I have a group of 8 guys from Philly trying to plan a trip in April. We’re debating between Charleston and Tampa. What do you think is the way to go?” —​Frank Cimato, via Instagram

Tough one here. Charleston is one of my favorite cities anywhere, with culture, outstanding history, restaurants and scenic settings, from Lowcountry to the Atlantic. You’ve got one of the 10 greatest resorts in the U.S. in Kiawah Island, with so much PGA Championship and Ryder Cup history, holes on the ocean, superb instruction and restaurants—just ideal. And there’s more oceanside golf further up the coast at Wild Dunes, which recently refurbished their Tom Fazio-designed Links course with holes that finish along the Atlantic. Plus, Charleston also sports modestly priced daily-fee options that are worth your while. And yet…Tampa is home to one of my favorite buddies resorts anywhere, Innisbrook. Its lodging component is perfect for the boys, it boasts top-ranked instruction and 72 holes of golf, including Copperhead, a much-admired annual PGA Tour venue, Island, where Phil Mickelson captured the 1990 individual portion of the NCAA Championships and the recently renovated North course. Plus, Tampa offers big-city enticements, from restaurants such as Bern’s Steakhouse, to major league baseball to nightlife.

Charleston weather is ideal in April, with average daytime highs at 71 early in the month, to 77 later in the month. There’s a 25 to 29 percent chance of rain on any given day, with anywhere from 2.5 to 3 inches total for the month, on average. Tampa is a little warmer, with 79 to 83 the high from early until later in April. Rain can range from 1 to 3 inches and on average, it will rain five days in the month. It’s a great month to be in either destination.

If I’m being frank with you, Frank, this one’s a coin flip.