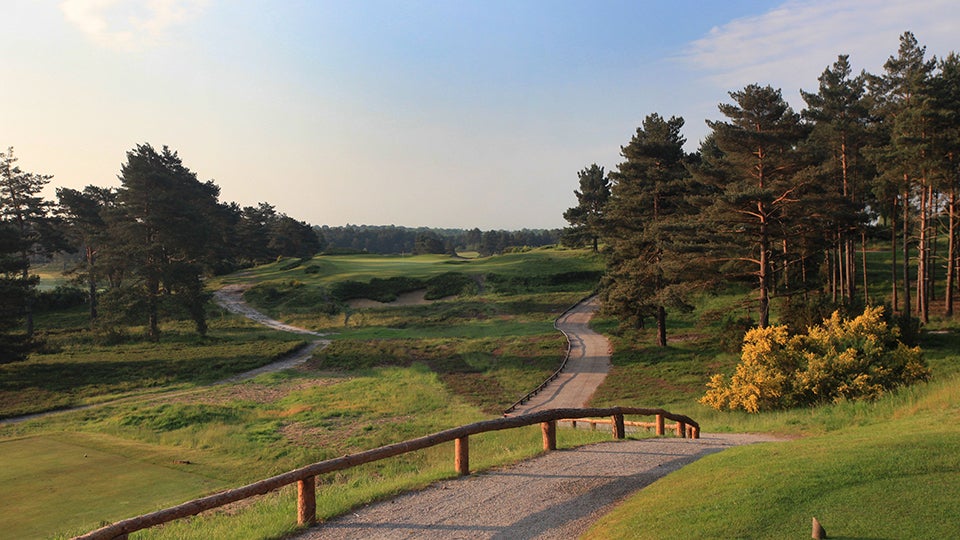 Tom Doak. Coore/Crenshaw. And, yes, The Donald, too. Some big names helped create the 12 new, and newly discovered, courses that join our biennial GOLF Magazine Top 100 Courses rankings. Below you will find the with six new additions to the Top 100 in the World list. Has your favorite made the cut? How exclusive is this club? On average, just three foursomes tee it up. Not per day. Per week. It was created in 2001 at the behest of Australia’s richest man, the late media tycoon Kerry Packer. Set in the rugged bush country of the Upper Hunter Valley, a four-hour drive northwest of Sydney, the muscular, drama-filled Greg Norman/Bob Harrison design features plentiful forced carries over deep gullies and ravines. Most of the course is set in a valley, with Pages Creek influencing play on half the holes. Other holes traverse higher ground; from the 10th green to the 13th tee, the course climbs 300 feet. Standouts are the holes edged by streams, such as the par-3 sixth, the par-5 10th and especially the par-4 16th, which is bordered by a majestic cliff face. Immaculate conditioning pairs with Norman’s Sandbelt-style bunkers and chipping areas, tangles of buffalo grass and a collection of ridge-top targets, to form a beautiful if brutal test of any player’s golf skills. Thailand’s first-ever entry into the Top 100 might be misnamed — this “Links” is nowhere near the sea. Question the moniker, not the quality. The highly private domain of well-connected Thais sits an hour northeast of Bangkok. Ayodhya achieves Top 100 status not with natural attributes such as cliffs, oceans or major elevation changes — it has none of those — but with an inspired design. Aussie legend Peter Thomson and his partners Ross Perrett and Mike Lobb conceived and routed the course, and co-founder and chairman Pitak Intrawityanunt completed the job in 2007. Forced to rebuild after a 2011 flood, Ayodhya emerged better than ever. The conditioning is superior and there’s a remarkable variety of holes. Ayodhya poses a supreme challenge, thanks to its 7,626 yards, cunningly placed bunkers and ingenious greens. The putting surfaces are large, firm, fast and varied. Between the size, configuration and contours, no two greens are alike. This roomy oasis amid the chaos of Bangkok and its surroundings succeeds on every level. Long overshadowed for rankings glory by neighbors San Francisco Golf Club and the Olympic Club, the “Cal Club” finally cracked our U.S. Top 100 in 2011. Additional positive reviews from course-ranking panelists have boosted it into the World Top 100. Dating to 1926, the course hit its stride following an Alister MacKenzie makeover in 1928. Not until Kyle Phillips reworked the layout in 2007, however, did the Cal Club reach its peak. Massive cypress trees, rolling terrain and gorgeously crafted bunkers define this northern California treasure.

TOP 100 SCORE PREDICTOR: Ever Wonder What You Might Shoot on the Top 100 Courses in the World? Now Is Your Chance! It’s baaaaack, and with a vengeance. A Top 100 in the World stalwart since 1991, Winged Foot East, in Westchester County, N.Y., stumbled and missed our rankings list in 2013. A marvelous, recent restoration by Gil Hanse has ensured the course’s comeback. Much shorter yet nearly as challenging as its celebrated sibling, the West, the charming East offers improved pacing, more variety, and additional water hazards. Roberto De Vicenzo claimed the first U.S. Senior Open here in 1980, and the course has hosted two U.S. Women’s Opens (1957 and 1972). Selective tree removal and bunker work have also enhanced the East, yet it’s Hanse’s precision in re-creating the intricate A.W. Tillinghast green contours — notably, the back of the green at the par-5 12th and the fiendish false front at the par-4 14th — that has truly elevated this 92-year-old track. Known as “Royal Hague” to most, the Netherlands’ first Top 100 contribution belongs to the nation’s oldest golf club, which dates to 1893. This 1938 H.S. Colt/C.H. Alison/J.S.F. Morrison creation replaced the club’s original course, which was destroyed in World War II. Heaving fairways amid dunes and inland forests set the tone for a remarkable lay-of-the-land journey. Located a few miles from the North Sea, the course — with steady breezes and puzzling, tree-framed, wildly rolling terrain — is a spiritual cousin to Britain’s partly wooded seaside layouts. Gene Sarazen called it “the toughest course I’ve seen in Europe.” After Dutch architect Frank Pont’s recent, sensitive restoration of greens and bunkers, plus the addition of new tees, “the Hague” again lives up to Sarazen’s accolade. Like a sibling in the shadow of the family’s older favorite son (the Old), this 92-year-old H.S. Colt design, 30 miles west-southwest of London, now shines on its own merits. Supporters have long praised it as the superior modern test. At 6,729 yards, the New is some 300 yards longer than the Old and traverses higher ground. It’s also stronger, with long carries over heather and sharper drop-offs around the elevated greens. Moreover, it’s truer to its heathland setting, with fewer trees and deeper bunkers. Colt’s fifth hole — an uphill thrust through trees and over a heathery, sandy gully to a green framed by bunkers — is the best par 3 on the property. And the dogleg par-5 sixth, a 1930s replacement hole from Colt’s original design, offers superb risk/reward on the second shot and a perched green that rejects all but the surest strikes.