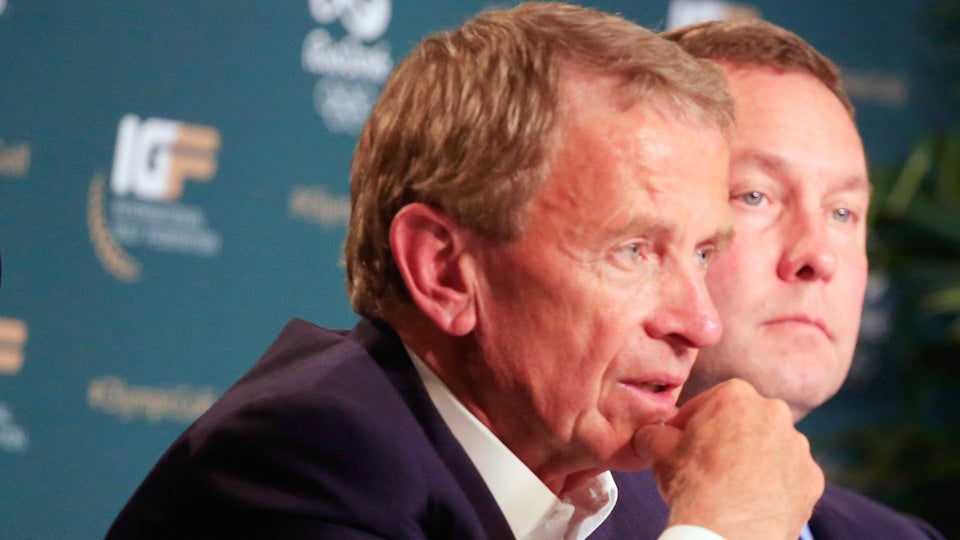 PONTE VEDRA BEACH, Fla. – The headlines about golf’s return to the Olympics in Rio this summer after a 112-year absence have been largely negative.

Australia’s Adam Scott and Marc Leishman bowed out. So did South Africa’s Charl Schwartzel and Louis Oosthuizen. Fiji’s Vijay Singh did the same. Meanwhile, an article in the Harvard Public Health Review, co-published by TIME, urges: “Zika Virus Means Brazil’s 2016 Olympics Must Not Proceed.” Keep in mind the golfers unlike, say, the swimmers and divers, will be spending some 25-30 hours outdoors in Rio.

This is the climate in which two likely Olympians (Graham DeLaet of Canada and Caroline Masson of Germany) and PGA and LPGA Tour commissioners Tim Finchem and Mike Whan, respectively, professed their enthusiasm and excitement for Olympic golf at a press conference at the Players Championship at TPC Sawgrass on Tuesday.

“I’ve been lucky enough to represent Canada a few times in different international events, World Cups and Presidents Cups,” DeLaet said, “and there’s something just really, really special about just putting your flag on your back and going to play for 35 million people, and it’s something that I hope I have the opportunity to do.”

In a humorous nod to 1904 Olympic golf gold medalist George Lyon of Canada, DeLaet even called his country “the defending champions.”

But should anyone be traveling to Rio to play golf at all?

Finchem says he can see how Zika might dissuade players with young families from making the trip. “The easy thing to do,” he said, “would be to say, ‘Well, let’s just pass this year.'”

Whan said his players were advised of the risks when they played an Olympic test event in Rio in March, but instead of playing in beekeeper suits—or even long pants and long-sleeved shirts with the collars up—they did so in skirts and short sleeves. What’s more, he added, the Games will be played on the coast in Rio’s winter months. Both circumstances, he said, should help clear the air of potentially virus-carrying mosquitoes.

“I would say five or six players have asked me questions about Zika,” Whan said. “I’ve yet to have a player say to me they’re not planning to go because of Zika.”

(RELATED: Zika Be Dammed! The Women Are Ready for Rio)

Masson, for example, is on board.

“Obviously players talk about Zika,” Masson said. “‘Do you have information? What do you think?’ It’s very hard for us to say. I mean we just trust in what the [LPGA] Tour gives us, what the WHO gives us, information, and take all the precautions we can, but I think that most of all, everybody’s really excited and we feel safe.”

Whether or not that feeling is justified is up for debate.

“Brazil’s Zika problem is inconveniently not ending,” wrote Amir Attaran, a professor at the School of Epidemiology, Public Health and Preventive Medicine at the University of Ottawa, in TIME. “The outbreak that began in the country’s northeast has reached Rio de Janeiro, where it is flourishing. Clinical studies are also mounting that Zika infection is associated not just with pediatric microcephaly and brain damage, but also adult conditions such as Guillain-Barre syndrome and acute disseminated encephalomyelitis, which are debilitating and sometimes fatal. Simply put, Zika infection is more dangerous, and Brazil’s outbreak more extensive, than scientists reckoned a short time ago.”

The article questions the wisdom of enabling a mass migration of some 500,000 foreign tourists into the heart of an epidemic in Rio. And some would-be travelers are taking pains to avoid even outlying areas. Citing Zika concerns, the Pittsburgh Pirates and Miami Marlins voted last week not to play two games on May 30, 31 in San Juan, Puerto Rico, relocating them to Miami.

The Olympics are still three months away, but as they draw near, more golfers, tempted by medals but mindful of mosquitoes, will be forced to make a choice: Go for the gold or let discretion be the better part of valor.

With the precedent already set and the crisis continuing, the epidemic of golfers sitting this one out may have only just begun.