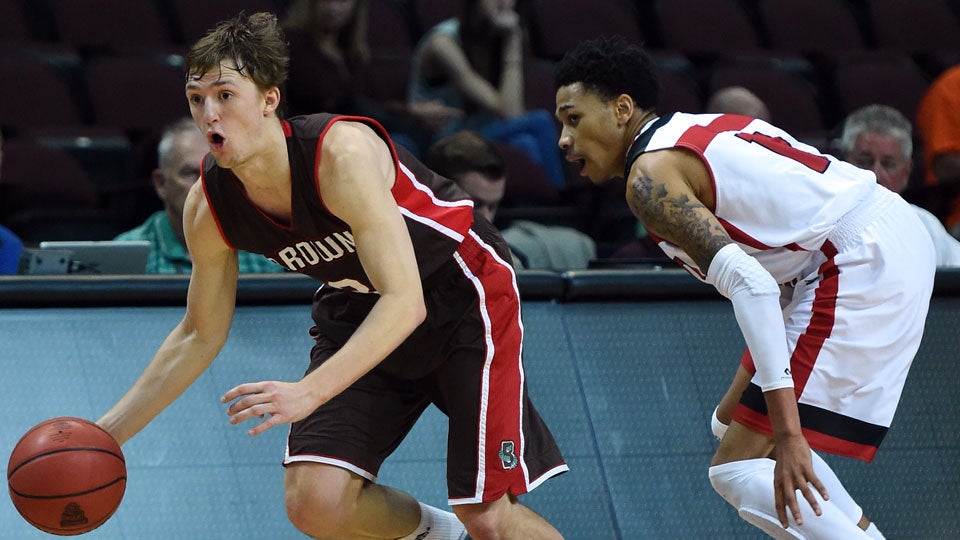 DALLAS, Texas — Dallas sports fans are used to coming out by the thousands to cheer on native son and World No. 1 golfer Jordan Spieth, but they were also there in smaller but still loud numbers Sunday to see his similarly talented brother, Brown University guard Steven Spieth.

The younger Spieth started and played for the majority of the NCAA non-conference game against the SMU Mustangs, his first-ever hometown college appearance, thrilling his parents and hundreds of family and friends who attended the game, a 77-69 SMU victory.

“We’ve known about this game for a year and it’s great to see him play at home again. I bought 50 tickets myself and I didn’t get enough. We have friends here we never to get to see anymore,” said Chris Spieth, Steven and Jordan’s mom, whose older golfing son was coming back from the Australian Open. “We have two kids who excel in their own ways.”

Spieth, who has started the majority of games in his three-year Brown University career, played a team high 36 minutes and contributed 14 points with four three pointers and six rebounds in the loss.

“It was good to show what I can do, especially in front of a home crowd,” Steven Spieth said. “I think everybody who saw me at high school (nearby Jesuit Preparatory School) was here today.”

Among the crowd at SMU’s Moody Coliseum was former U.S. President and one-time Jordan Spieth golf partner, George W. Bush, whose namesake library was across the street from the game site.

Perhaps splitting his loyalties, the 43rd president was wearing a brown sweater on top of a red SMU shirt. At halftime the Spieth parents, along with their younger daughter Ellie, held an animated conversation with Bush at mid-court, perhaps recalling their golf encounter at nearby Brook Hollow Country Club when Jordan Spieth was 16 years old.

“It’s just thrilling to all be here together,” Shawn Spieth said. “I hope we can just keep this up.”

The most recognizable member of the family, Jordan, was hoping to be at his brother’s college game near his home, but was finishing up a second-place performance at the Australian Open where he was the defending champion.

“I’m sure we’ll get to Australia one day, but this is more important to have everybody here together,” Shawn Spieth said.

Flying commercial from 8,500 miles away, Spieth was unable to make the game, landing back in Dallas Monday morning after the Brown University team returned to their Providence, Rhode Island campus late Sunday.

“Jordan really wanted to be here, but he couldn’t make it happen. He will be watching,” Chris Spieth said.

As has become their routine in the two sports star household, the Spieths stayed up late Saturday night in Dallas to see their older son finish his final round in Sydney before turning their attention back to the basketball court.

“Sure, I watched it,” Steven Spieth said. “It was a tough second place performance.”

“Just for the record, I would be OK with a second place in the Australian Open,” a smiling Brown coach Mike Martin interjected.

The younger Spieth also couldn’t resist a brotherly zinger after his game.

“I’m just glad it didn’t go to extra holes, so I could get a good night’s sleep.”

“We didn’t raise our kids to be superstars,” Shawn Spieth said. “Family first and good people are the most important.”

To make sure the Brown basketball team got a taste of Texas hospitality, they ate local BBQ for lunch on Saturday, the Spieths catered Mexican food on Saturday night, and they dined on McAllister Deli Sandwiches and sweet tea after the game.

“I’ve got a few of the guys to watch Jordan play golf on TV, but not many,” Steven Spieth added. “It’s fun to be at home and get to see everybody. I got to spend a lot of time at home and that’s rare for me.”

Other than the holidays, the next full Spieth gathering may be at the 2016 Masters Tournament where Jordan Spieth will be defending his first major championship of the new season. But until then, the two-sport Spieth caravan will roll on in different arenas and parts of the world, much to the delight of their family, friends and fans.