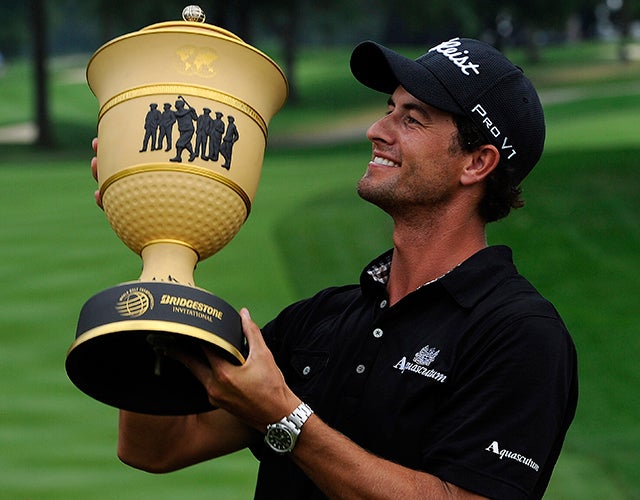 All those moving parts working beautifully together, giving rise to impeccable performance. Tour pros’ swings? Nope, try their five-figure timepieces. Here, with a tip of the visor to the PGA Tour’s Style Insider, is a look at which Tour pros wear which luxury watches.

For his second Masters victory, in 2014, Bubba Watson hauled in $1.62 million, more than enough to cover the cost of his $650,000 limited edition Richard Mille RM038 Bubba Watson Victory Watch, which, we presume, he didn’t have to pay for anyway. Golf tournaments aren’t scripted, but trophy presentations are. After his final putt dropped at the 2014 British Open, Rory McIlroy found time to don an Omega Seamster Planet Ocean 600, a timepiece that pays homage to Omega’s dive-watch heritage (and retails for around $6,000). With his winning total of 17-under, Rory went pretty deep himself.

Few Tour pros bring the bling like Poulter, who wasn’t his usual assassin self at the 2014 Ryder Cup at Gleneagles but was a big part of show of the celebration. So was his Audemars Piquet Royal Oak. With a retail price of $27,900, the watch is water-resistant. Champagne resistant, too. Asked on Instagram which watch she prefers, the Big Wiesy gave a shout out to her sponsor, Omega. “The butterfly Constellation is my fave,” she wrote, adding smiley faced emojis to emphasize her point. We’re thinking she likely meant the $25,000 Omega De Ville Prestige Butterfly, which features white gold, dozens of sparkly diamond and an artful butterfly pattern on its face.

Why is this man smiling? For one, he just won the 2013 British Open. For another, that’s a Rolex Cellini Danaos on his wrist, a watch that retails in the neighborhood of $7,000. Then again, with his earnings from his winning week at Muirfield, Lefty could have bought about 200 of them.

In better days, Tiger Woods’ swing was like a high-end timepiece, with many tiny moving parts working beautifully in sync. Somewhere along the line, he lost it. Let’s hope he still has the $12,000 Rolex Deepsea Sea-Dweller that he showed off while collecting his trophy at the 2013 Players Championship. Look familiar? You might have spotted the same watch on…

That broomstick putter at the 2013 Masters sure was ugly. But Scott made up for that stylistic faux pas by slipping on a fashionable Rolex Deepsea Sea-Dweller. Looks good with green, right? Most twentysomethings these days keep time with their cell phones. Korda’s got something classier to lean on: a tasteful TagHeuer Aquaracer Lady, which retails for around $7,000.

The Rolex Daytona, which retails for around $12,000, is the product of sophisticated Swiss engineering. And judging from his Iron Byron ball-striking at the 2014 U.S. Open at Pinehurst, you’d have thought that Kaymer himself was made of nuts and bolts. Que hora es? It’s about the hora for Sergio to finally win a major. For now, though, he’ll settle for first place at the 2014 Qatar Masters. Nice trophy. And that $22,000 Omega Seamster Planet Ocean Ceragold is pretty snazzy, too.