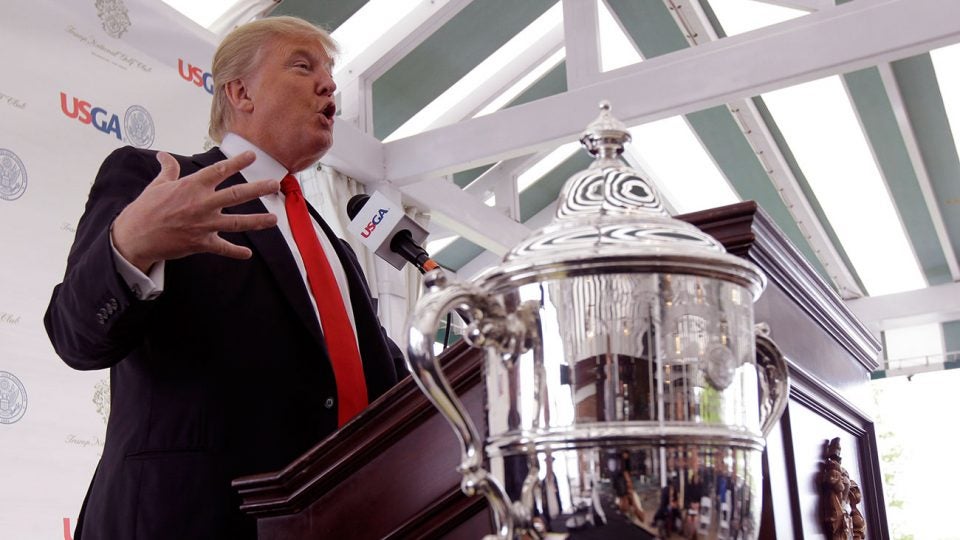 Donald Trump during a news conference at Trump National in Bedminster, N.J., announcing the club as host of the 2017 U.S. Women's Open.
AP Photo

The women’s group UltraViolet will hold a protest at the LPGA’s Bank of Hope Founders Cup on Saturday, urging the organization and its players not to participate in the 2017 U.S. Women’s Open at President Donald Trump’s club in Bedminster, N.J. in July, GOLF.com has learned.

According to a spokesperson for the group, UltraViolet has commissioned a plane to fly over Wildfire Golf Club in Phoenix, Ariz., carrying a banner reading “LPGA: Take a mulligan. Dump sexist Trump.” UltraViolet members will also be stationed at the gates to the grounds handing out golf balls and golf ball-patterned beach balls with the message, “LPGA: Dump Trump.”

“The LPGA should not be rewarding Trump’s bigoted brand and normalize his platform and policies that degrade women and divide our country,” Shaunna Thomas, a co-founder of UltraViolet, said in a press release. “The USGA and LPGA need to send a clear signal to young golfers, including women, people of color, and people with disabilities that it stands against Trump’s brand of hate, and for an inclusive strong future by moving the upcoming U.S. Women’s Open from Trump National Golf Course.”

On Friday, the LPGA released a statement regarding the group’s planned action: “Regarding the U.S. Women’s Open, the USGA – not the LPGA — owns and operates the event and we are delighted to have so many of our LPGA members qualify to participate each year. When it comes to decisions regarding venue, purse, TV, etc., those are solely made by the USGA. We respect and support the decisions made by the USGA on this matter.”

UltraViolet, one of the official partners of the Women’s March on Washington, has collected more than 100,000 signatures on a petition urging the USGA to move the 2017 U.S. Women’s Open from Trump Bedminster in Bedminster, N.J.

In its most recent statement on the issue, the USGA indicated that it will move forward with plans to stage the event at its current venue, and in October, LPGA commissioner Michael Whan said that the final decision rests with the USGA.

“All I’ve said to the USGA is this,” Whan said. “‘You have long since proven you support women’s golf so if you tell us this is the right place to play then we’re right there with you.'”

As for the players, 67% of LPGA players surveyed told the 2016 Sports Illustrated anonymous poll that they took no issue with LPGA events being held on courses owned and operated by Donald Trump.