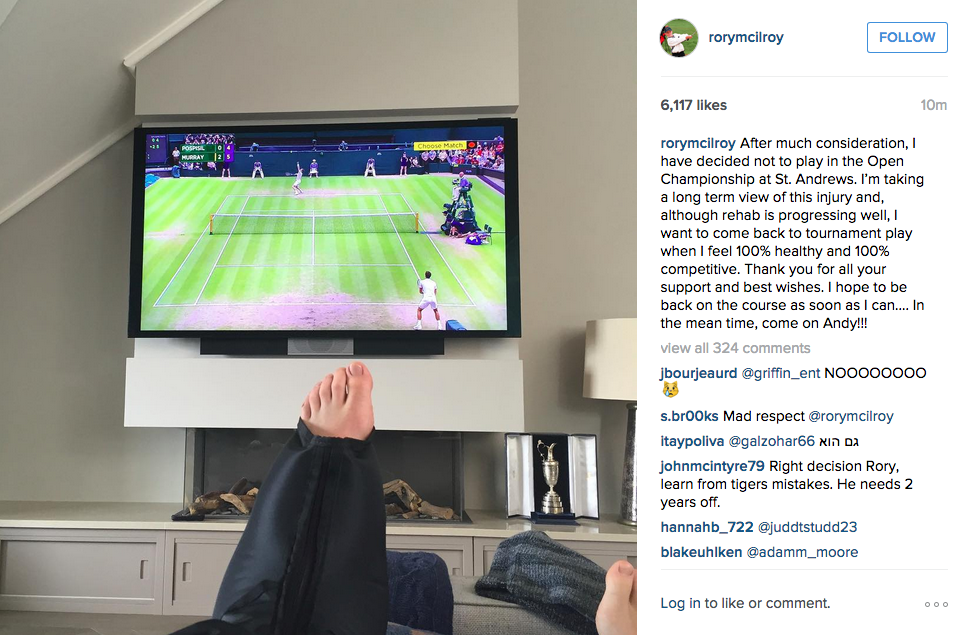 McIlroy posted an Instagram photo letting the world know he would not be at this year's British Open.
Rory McIlroy

The Open Championship waits for no man, even the defending champion and world number one.

The 144th edition of golf’s oldest major tees off on July 16 without Rory McIlroy, who withdrew after severely injuring his ankle in a July 4 soccer game with friends. Fans of the Northern Irishman now turn their eyes to Aug. 13 and the opening round of the PGA Championship, where McIlroy is again the defending champion. But will he be fit to make the trip to defend at Whistling Straits in Wisconsin?

McIlroy himself was non-commital on his immediate plans when he announced his Open withdraw. “I’m taking a long term view of this injury and, although rehab is progressing well, I want to come back to tournament play when I feel 100% healthy and 100% competitive,” he wrote in an Instagram post. “Thank you for all your support and best wishes. I hope to be back on the course as soon as I can.”

The 26-year-old said he suffered a “total rupture” of his left anterior talofibular ligament (ATFL), located in the outer section of ankle. 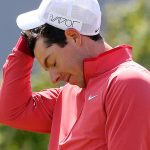 “A complete rupture could mean a lot of things,” said Dr. Adam Cohen, a orthopedic surgeon and sports medicine specialist at St. Luke’s-Roosevelt in New York City. “If it was a complete rupture, it could also affect the surrounding areas. On a grade one ankle injury, the ATFL is also injured. There’s a theoretic chance with a grade one the recovery time could take three to six weeks. If there’s serious rehab, they could [play] sooner. If it’s a high ankle sprain, it could be longer.”

Cohen said that only an MRI would show the extent of the injury. McIlroy was scheduled to have more scans earlier this week. He is rehabbing under the care of English sports scientist Dr. Steven McGregor.

McIlroy’s camp did not respond to inquiries regarding his progress at the time this was published.

Dr. Cohen, who was an assistant team physician for the New York Yankees from 2004-08, said athletes at the highest level routinely come back too soon. In McIlroy’s case, the temptation to come back too soon might be heightened since his injury comes at the worst possible time in his season.

He is the defending champion at the WGC-Bridgestone in Akron, Ohio, Aug. 6-9, a week before the PGA Championship. Two weeks after the season’s final major, the FedEx Cup playoffs begin, with four tournaments in a five-week stretch beginning Aug. 27. That line-up would have seen McIlroy play six tournaments in eight weeks, a heavy schedule even if he were fully fit.

But at least one golfer offers McIlroy a cautionary tale.

Richie Ramsay, a European Tour player and former U.S. Amateur champion, suffered the same ankle injury two years ago while running. He told Sky Sports this week that it took him three months to return to the golf course, and almost five months total to return to full health. “Still these days I’ve got to watch what I’m doing with regards to walking on sides of hills and going over it because once you do it once, you’re susceptible to doing it again and that’s the most dangerous thing,” Ramsey said. “You’ve just got to be really careful what you do after you do it one time. It’s just tricky. It’s a really tricky thing to deal with.” If McIlroy is unable to defend his titles at the WGC and PGA Championship next month, he may be wary of returning to face an intense playoff schedule, meaning we may have seen the last of him for this PGA Tour season.

In his message to fans, McIlroy said only that he hopes to be back as soon as he can. That could be later, rather than sooner.