Why Jason Day Doesn’t Need to Be Like Tiger Woods 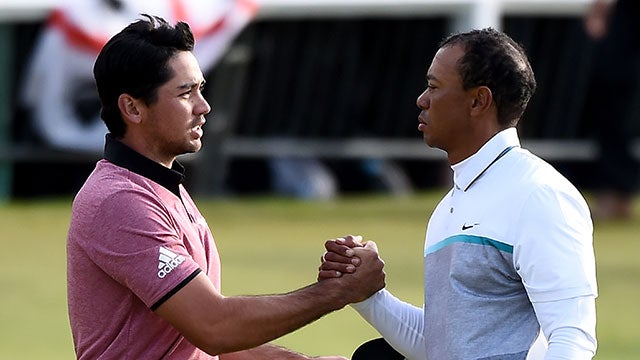 Jason Day and Tiger Woods shake hands on the 18th green during the second round of the 144th Open Championship.
Getty Images

Can a golfer dominate like Tiger Woods and still be a genuinely nice guy like Jason Day amid the cutthroat competition on the PGA Tour?

The question comes up because Day revealed at last week’s WGC-Cadillac Championship at Trump National Doral that he had picked Woods’ brain for mental-game tips during a 50-minute phone call.

To be sure, Day and Woods have some things in common. Each grew up mindful of his tough-as-nails Asian Tiger Mother, Day under the Filipina Dening and Woods under the deceptively steely Thai Kultida. Each player has risen to No. 1 in the world. They’re roughly the same height and build.

In terms of people skills, though, they are nothing alike.

There was a funny moment in Day’s pre-tournament presser at Doral. A late-arriving reporter asked Day what had happened to the aura of invincibility he displayed in late 2015. It was a fine question, but one that Day had already answered, so Day let the guy have it—or pretended to, really: “If you were here early enough, Ben,” he said, “you would hear my first answer. I had the three-month span off and it’s just kind of difficult to play great golf and then have three months off and then try and pick it up again.”

Everyone in the room broke up laughing at Day’s dig at Ben Everill of the Australian Associated Press, whom Day knows about as well as he knows any working member of the Fourth Estate. It was good fun.

When Woods stared down reporters, anyone who laughed most likely did so out of nervousness. His abrupt mood swings could halt people in their tracks in the manner of Joe Pesci’s wise guy character in Goodfellas. (“I amuse you? I make you laugh?”) The temperature in the room plunged.

Day is just not that type of guy. At Doral he struggled to articulate his biggest takeaway from his chat with Woods.

“I’ve always said it: Once I improve the mental game for myself, this is the last piece of the puzzle for me, I believe,” he said. “And I think I will be able to go out there and just kind of—” Day paused. There was no nice way to say this. “Kill it,” he finally finished, shooting a glance at the floor. Woods, of course, wouldn’t have hesitated. He would have asked, “Did you get that? I said kill it. K-I-L-L. Write it in ink.” Ruthlessness, intimidation, collateral damage—that was Tiger.

Day isn’t that at all, and yet he can still “kill it.”

Consider that after the young Aussie birdied the last three holes to win the Canadian Open in July, just a week after falling one agonizing shot short of a playoff at the British Open at St. Andrews, he met his lengthy media obligations, only to walk outside and see a throng of 200 people waiting for autographs. It would be another 45 minutes, at least, before Day could shove off for the hotel, for dinner, for down time with his team.

Still, he signed. He smiled. Terry Reilly, a colleague of Day’s agent, Bud Martin, at Wasserman Media Group, recalls introducing Day to his mentally handicapped brother, Jimmy, at a tournament. Day crossed the fairway to say hello. Hours later he spotted Jimmy and his 82-year-old mother walking by the practice green.

Jimmy turned and beamed, and Reilly would later listen to his mom gush about that nice young man Jason Day.

Martin, a father of two who recruited Day as a teen-ager and has been at his side ever since, has told everyone as much for years—that along with his belief that Day is on his way to being one of the all-time greats.

“The way he treats people—there’s a certain majesty about people that everyone puts on a pedestal, they have the ability to make other people feel important,” Martin says. “He has the ability to make everyone feel better about their day. When I talk about it I choke up.”

In that respect Day is like Arnold Palmer, less likely to complain about the way his burger is cooked than he is to turn up behind the counter, laughing with the kitchen staff. Close your eyes for a second and imagine Day. He’s smiling, right? Now try it with Tiger in his prime. Not happening.

“There’s a survivor element there,” Chuck Presto, senior VP of global sports marketing for TaylorMade, says of Day. “There’s a strength and a resolve that people maybe didn’t see until Jason won the PGA. You combine those survival skills and that toughness with his people skills, all that smiling and sweetness, and it’s a unique combination.”

Can nice guys finish first? Going by his results in both the trophy and the media room, Jason Day has already answered that one in the affirmative.