Which Member of the Big Three Has the Best ‘A’ Game? 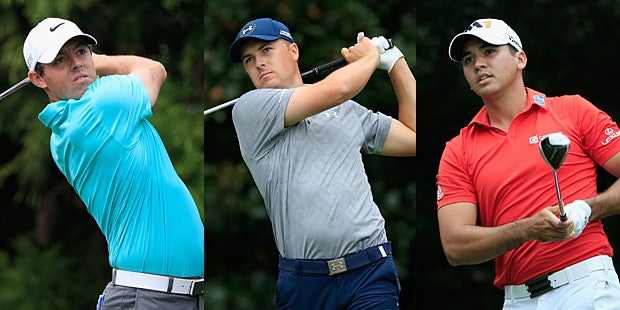 In the six months since Jason Day captured the PGA Championship and ushered in talk of a new “Big Three,” fans have asked us a difficult question. Who would you take at his best: Jordan Spieth, Jason Day or Rory McIlroy? In other words, who has the best “A” game?

There are two ways to arrive at an answer using performance data. We can take a macro view and look at who was able to sustain a superior level of play over a short period of time. Or we can take a micro view and look at moments when each component of each golfer’s game hit its peak and sum up those individual peaks into a composite personal best round.

Using the first method, I collected every five-week stretch from the last five seasons (2011 to 2015) where a golfer played at least three events during that span and averaged their scoring average relative to the field in each round. If they shot 277 for an event when the field averaged 292, they beat the field by 15 strokes or 3.75 strokes per round. The table below shows the 10 best stretches of play with the date and tournament that marked the end of that five-week period.

Day’s five-week stretch that included his T12 at the WGC-Bridgestone, breakthrough PGA Championship victory and dominant win at The Barclays was the top stretch of the last five seasons at 4.7 strokes per round better than the field — a full quarter of a stroke better than the next best streak. Day posted the third best streak a few weeks later after another win at the BMW Championship – which combined with The Barclays victory and another T12 at the Deutsche Bank was 4.3 strokes better than the field per round.

Unsurprisingly, Day’s six best streaks all came in that July to September stretch where he won four times in eight events. Day’s next best streak from the fall of 2010 (T10-T5-T2) paled in comparison at only 2.9 strokes per round beyond the field. It’s clear that Day reached a level of play at the end of last summer that no one else has been able to reach in recent years. Even Tiger Woods didn’t hit those heights during his dominant 2009 season where he finished the PGA Tour season with three wins and three runner-ups in a nine-week stretch. You have to look back to the end of 2007 for a comparable streak from Woods.

Sandwiched between Day’s first- and third-ranked streaks is McIlroy’s late-summer stretch in 2012 where he won the PGA Championship, Deutsche Bank Championship and BMW Championship in a five-week stretch. McIlroy’s 2014 summer streak when he won three straight – including two majors – pops up at No. 6. Spieth makes an appearance at No. 7 for his early-season streak in 2015 that included a win at the Valspar Championship, back-to-back runner-up finishes and a dominant victory at the Masters.

In terms of who has hit the absolute highest sustained peak, Day is the clear winner, but both McIlroy and Spieth have shown the ability to put together streaks of their own.

Using the second method, I calculated Strokes Gained numbers for every PGA Tour player for Driving, Approach Play, Short Game, and Putting for each round in 2014 and 2015. I then looked at the best round for each component and the average of the best three rounds for each component. Adding them together shows what a theoretical “perfect” composite round would look like if each part of a golfer’s game was firing on all cylinders. I’ve shown a table of the top 10 by both methods below.

Consider that the absolute best rounds we see on Tour – the 59s and the low scores on difficult courses – typically come in at around 12 strokes better than the field. Looking at the top 3 rounds method, J.B. Holmes finishes best at about 15.1 Strokes Gained in his theoretical perfect round. That’s not that much better than his first round at the WGC-Cadillac in March when he shot 62 versus a field average of 73.4. The average “perfect” round for qualifying PGA Tour players is besting the field by about 12 Strokes Gained in total.

Despite hitting the highest highs for a sustained stretch of play, Day’s individual skills haven’t quite hit the highs of McIlroy or Spieth. For me, the best of the “Big Three” when he brings his best game is McIlroy. He has shown the ability to get as hot as anyone with the putter for a few rounds, and Spieth can’t match his distance.