What if… Tiger Woods in 2005 had pursued his dream of becoming a Navy SEAL?

What if. Those two little words cut to the heart of what we love about sports. They keep us riveted even after a losing season (or nine of ’em in a row, bless you, Browns fans.) They’re about hope and vindication; they allow us to dream up dynasties and wipe away mistakes. What if… In the April 17-24 issue of Sports Illustrated, we explore the most compelling (realistic) conjectures and the coulda-woulda-shoulda-been turning points with the most expansive ripple effects. Brace yourself. You have just crossed over into the imaginary zone. Next up, What if Tiger Woods had chased his Navy SEALs dream?

Woods had an exceptionally prolific—albeit brief—career in professional golf, winning eight majors in eight full seasons on the PGA Tour before abruptly walking away from the game. His last event was the season finale in 2004, after which he shocked sports fans by enlisting in the U.S. Navy. He subsequently fulfilled his dream of becoming a Navy SEAL. Woods is now a Navy admiral and decorated combat veteran who oversees SEAL training. He said in a recent interview that he’d not hit a golf ball in more than 22 years—”except when messing around with my kids.”

The final major of Woods’s career, the 2004 PGA Championship at Whistling Straits, was the first at which DiMarco contended. While Woods finished 24th, DiMarco was part of a three-way playoff for the title, along with Justin Leonard and Vijay Singh, who won the event.

Eight months later DiMarco was the wire-to-wire winner at the 2005 Masters, claiming the first of his two green jackets. DiMarco’s Sunday 68, which put him seven shots clear of Luke Donald and Retief Goosen, was clinical in its excellence—it was the largest margin of victory at Augusta National since Woods’s historic victory in 1997, when he won by a dozen.

In the 2006 British Open at Royal Liverpool, DiMarco was in a three-way tie through 54 holes with Ernie Els and Sergio García. But DiMarco again closed with an airtight 68 and won by three over Els. “Who does this guy think he is—Tiger Woods?” Els asked reporters that day. “I wish he’d go off and join the Marines.” That week’s cover of Sports Illustrated featured a fist-pumping DiMarco with the headline THE CLOSER!

With those two major titles, Els and others wondered whether DiMarco would become golf’s dominant figure, as Woods had been from 1997 to 2004. But that didn’t happen. In fact, without DiMarco’s surprising victory at the 2025 Masters, when at age 56 he became the oldest player to win a major, it is unlikely that he would have been voted into the hall (at least not in the competitor category).

“It’s an extraordinary two-person class,” Annika Sorenstam, chairperson of the WGHOF selection committee, said in a statement. “Tiger Woods would have been a first-ballot Hall of Famer on the basis of what he did as an amateur golfer. As for Chris DiMarco, his Hall of Fame credentials were defined by what he did in those three majors that we all remember so fondly.”

Reached at an undisclosed location in the South China Sea, Woods said, “My seven-year-old saw the news on ESPN. He’s like: ‘Daddy, you were really good at golf!’ One of the neatest things, though, will be sharing the stage with Chris. I’ve gotten to know him at the [Masters] champions dinners over these past, what, 20 years now. Marko—Mark O’Meara will always be the original Marko—didn’t hit it long, didn’t hit it high … but, man alive, did he hit it with heart.”

In that wide-ranging phone interview in which he seemed to enjoy reliving his long-ago golf exploits, Woods was asked whether DiMarco could have made it as a Navy SEAL. “Tell you what,” Woods answered, considering the question, “I see this guy as more on-the-ground. Green Beret or something like that. He would have been all-world.”

DiMarco, who won only three nonmajor Tour events, returned the compliment. “I was plugging along in my career,” he said. “I was playing some good golf in ’04 when Tiger decided to hang it up. Everybody was crying, Oh, golf is going to miss Tiger so much. I was like, One less guy for me to beat! I told Tiger that and he laughed his ass off. But, really, he was so devoted to getting better, and I took a s— load of inspiration from that.”

DiMarco turned pro in 1990 with a reputation of being a tough, gritty and inspiring teammate at Florida, where he was a three-time All-America. He played in the 2003 and ’05 Presidents Cup and the ’04 and ’06 Ryder Cup. The U.S. had a lone win in those four events.

“At the champions dinner at Augusta one year, probably 2009, I was sitting with Tiger and Arnold [Palmer], and I said to Tiger, ‘I’ve got those two majors, and that was great—it’s a thrill and all. But nothing meant more to me than playing on those four teams, and nothing made me sicker than not winning three of ’em,'” DiMarco recalled. “And Tiger said, ‘Raise your hand. Tell them you’ll do anything to help the team.'” 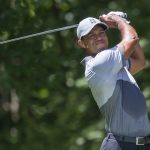 That led to a stretch from 2010 through ’20 when every year DiMarco served as either a captain or assistant captain of the Ryder Cup team—a stretch in which the U.S. was 5-0-1.

Coupled with his celebrated work as a developer of nonprofit six-hole inner-city courses and his commentary as an analyst for Golf Channel and NBC Sports, some observers believed DiMarco would eventually be elected to the World Golf Hall of Fame in the lifetime achievement category. When he turned 50, in 2018, he played some senior golf, but only sporadically and with mixed results.

Then came the historic 2025 Masters.

“Again, I was with Tiger,” DiMarco said. “We were talking to [Augusta National chairperson] Condoleezza Rice about playing the Masters with a tournament ball, and that ball is what made that win possible.”

Last year, the Masters became the first event to issue such a ball; it was balata-covered, and no one hit it farther than 270 yards. The course, meanwhile, was reduced from 7,989 to 6,925 yards; hundreds of trees were removed, as was the rough; and DiMarco won in a three-hole playoff over Jordan Spieth, who was bidding to join Jack Nicklaus as a six-time Masters champion.

Afterward, in his Butler Cabin interview, DiMarco famously told CBS’s Jim Nantz, “If I had any brains, I’d do like Tiger and quit for good right now. But I ain’t that smart.”