Tiger Woods has gotten plenty of well-wishes from fans during his return to competition this week, but there are a couple supporters who no doubt matter a little extra.

On his way to the first tee Saturday, Woods got some good luck hugs from his daughter Sam and his son Charlie, who were accompanied by Woods’s girlfriend Erica Herman.

No matter how Saturday’s round goes, Woods has a good team with him in the Bahamas this week. 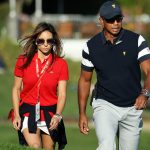