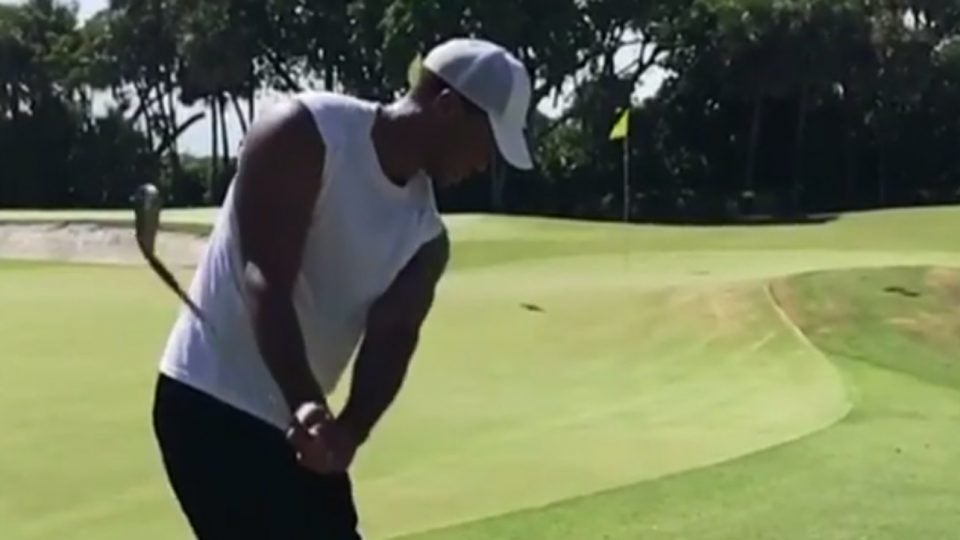 Tiger Woods is back!

Woods posted a video of himself Thursday hitting a mid-length pitch on both his Instagram and Twitter pages with the caption, “Dr. gave me the ok to start pitching.”

While Tiger has been busy documenting his off-course life (recent posts include his new Raiders-themed pool table, a shirtless portrait with a giant lobster he caught while free diving in the Bahamas, and a sneak peek at the work being done on his new public course design at Missouri’s Big Cedar Lodge), it’s been months since we’ve seen Tiger back in his element on the course.

Continuing back problems, surgery recovery and a recent stint in rehab after a Memorial Day DUI arrest have kept him from working on his game for the past several months.

For Thursday’s practice session, he was dressed casually in shorts and a sleeveless workout shirt, with his Bridgestone ball tote in plain view. He appeared to be pain-free (and yip-free!) as he showed off his pitching technique in slow motion.

Check out the video of his swing below, plus some of the predictably giddy reactions it drew:

Dr. gave me the ok to start pitching pic.twitter.com/tboq1L3Xdn