On Wednesday evening the Jupiter Police Department released the dashcam video of Tiger Woods’s arrest in the early hours of Monday, May 29.

The footage shows Woods struggling with a series of sobriety tests, including following the path of a police officer’s flashlight and walking a straight line.

According to the police report, officers found Woods’s vehicle around 3:00 a.m. ET Monday morning parked on the road with the engine running. Woods was asleep in the driver’s seat, and the car had minor damage, including two flat tires and damage to both the front and back bumpers.

Woods was cooperative, but his speech was “extremely slow and slurred, mumbled and confused,” police said. The report also said that he failed multiple sobriety tests at the scene. 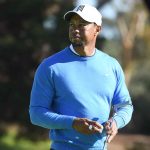 In a statement released Monday night, Woods apologized to his family, friends and fans and said, “I want the public to know that alcohol was not involved. What happened was an unexpected reaction to prescribed medications. I didn’t realize the mix of medications had affected me so strongly.” 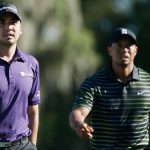 You may also like ‘Not the news you want to see’: Jason Day, other pros react to Woods arrest
You can watch the 15-minute video here: