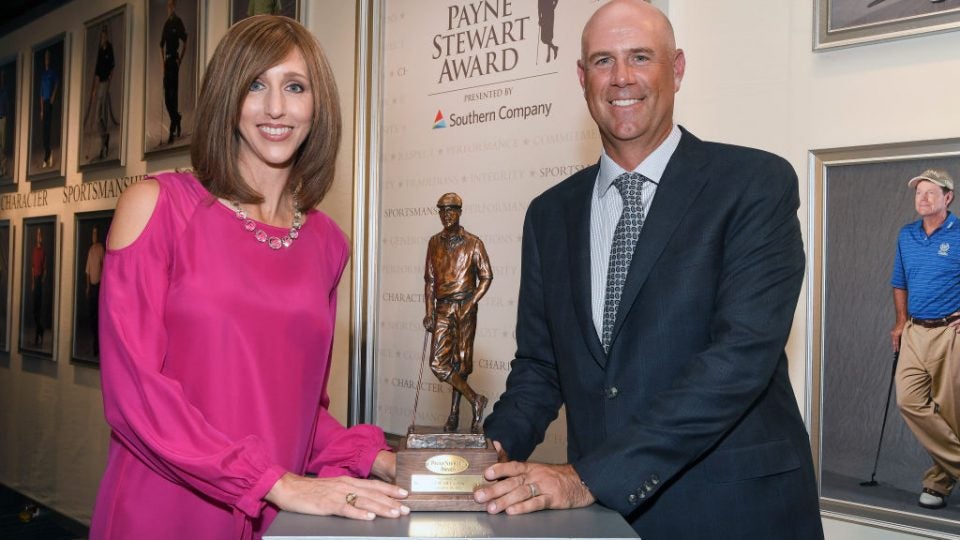 ATLANTA, GA - SEPTEMBER 19: Stewart Cink is recipient of the 2017 Payne Stewart Award poses with his wife Lisa for a photo during the Payne Stewart Award ceremony at the TOUR Championship, the final event of the FedExCup Playoffs, at East Lake Golf Club on September 19, 2017 in Atlanta, Georgia. (Photo by Stan Badz/PGA TOUR)

In a heartfelt speech while accepting the 2017 Payne Stewart Award, Stewart Cink spoke about his relationship with Payne, his wife, Lisa, and his longstanding passion for charity work. The moment capped an intense year for Stewart and Lisa, who was diagnosed with breast cancer in 2016. She is now in sustained remission.

Cink credited the couple’s early struggles as young parents with giving them the strength not only to persevere through Lisa’s treatment but to work to give back to their community throughout their marriage. “Our pain became our purpose,” Cink said.

Both Matt Kuchar and Kevin Kisner praised Cink’s character afterward in an interview with the Golf Channel. “He became like a big brother,” Kuchar said of Cink, while Kisner called him “genuine.” Kuchar said that he aspires to one day win the award himself and called the celebratory night one of his favorite events in golf.

Cink said that he developed empathy while playing his sport. “We’re born to be selfish,” he said. “You can become selfless through golf.”