WATCH: Spieth says Obama talked about aliens to psych him out during match

Three-time major champ Jordan Spieth made an appearance on the The Late Late Show with James Corden Thursday night.

A lot of laughs were had, including a segment in which Spieth chipped balls at a heavily padded (and spinning) Corden, but it was Spieth’s anecdote about his recent round with former president Barack Obama that caught our interest. 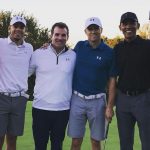 You may also like Jordan Spieth, Steph Curry and Barack Obama tee it up in Dallas

The World No. 2 and the former commander-in-chief (along with NBA superstar Stephen Curry) played a match earlier this week in Texas, and on the Late Late Show Spieth claimed Obama tried to distract him by telling him that aliens exist, and as president he got to see them for himself.

Spieth told Corden, “He goes, ‘they’re freaking crazy looking.’ And then he walks up, makes his putt, turns back, walks off the green, leaves it at that and gives me a wink.”

To hear the whole conversation, plus tidbits about Obama’s clutch putting prowess, watch the full interview below.