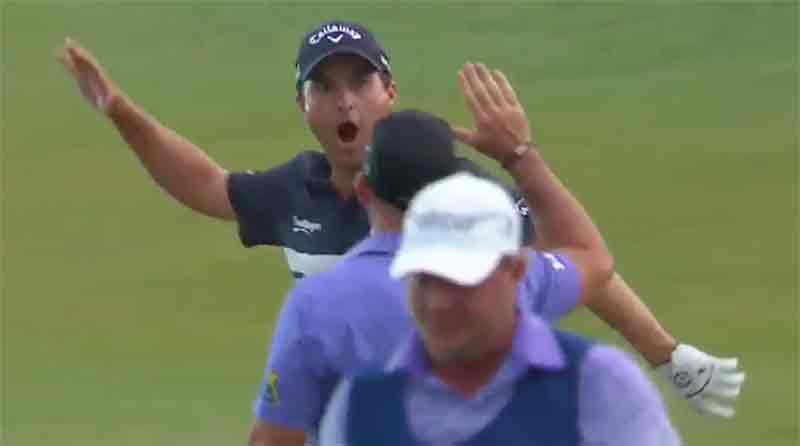 Kevin Kisner came up big when he needed to.
@PGA Tour Twitter

Kevin Kisner came up big in the clutch.

Kisner holed-out for eagle on the 18th green from 31 yards away on Sunday, which momentarily gave him and his partner, Brown, the Zurich Classic lead.

Jonas Blixt and Cameron Smith were tied with Kisner and Brown after 16 holes Sunday, but Blixt birdied the 17th to give him and Smith a one-shot lead in the best ball format with one hole to play.

On 18, Smith put his eagle chip next to the cup, almost guaranteeing a birdie and forcing Kisner or Brown to eagle.

Kisner did. It was his third hole-out of the day.

His ball tracked toward the cup, clanked off the pin and fell in, and the celebration ensued. Blixt and Smith were stunned, and after Smith tapped in for birdie, the teams were tied at 27 under and destined for a Monday playoff, which Blixt and Smith eventually won.

Play was suspended for more than six hours due to storms Sunday, so they finished with little daylight remaining. For the first time in its history, the Zurich was a two-man team event this year. Teams played alternate shot in Rounds 1 and 3 and best ball in Rounds 2 and 4.

With their backs to the wall …